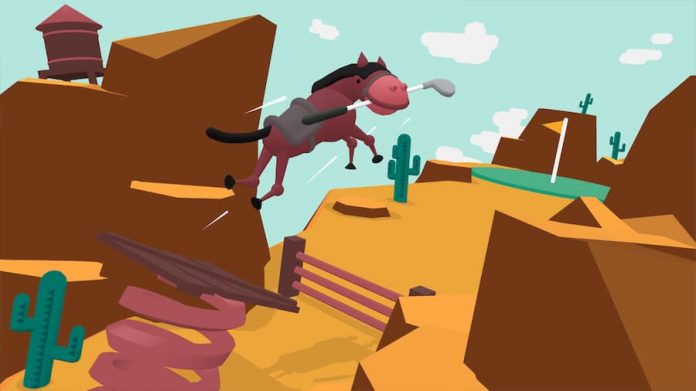 Billed as ‘the golf game for people who hate golf’, What The Golf? is one of the most joyous videogame experiences I’ve had this year.

Let’s clear this up first. It’s not a golf game. Sure, you occasionally hit a golfball into a flag. But you just as often throw a sticky lump of goo, pilot a jet-powered barrel, kick a house into a goal and launch a bird through the sky. What the Golf is a hodge-podge of wonderfully zany ideas, and the end result is something rather special.

Featuring a main campaign, a local multiplayer mode and various challenge modes, there’s a lot to sink your teeth into in developer Triband’s latest work. The main single player mode is where you’ll undoubtedly spend most of your time, though. There’s a huge number of levels to work through, all of various difficulties and absurdities.

“What the Golf is a hodge-podge of wonderfully zany ideas, and the end result is something rather special”

Right off the bat, you know that What The Golf? doesn’t take itself too seriously. After putting a golfball on a few simple courses, you’ll go to swing again – only this time, your ball doesn’t move anywhere. Instead, your character flies down the green, ready to collide into the flagpole. Not long after, you’re putting a hole ripped out of the ground, with your target being a ‘1’. You’re aiming for a literal hole in one.

That’s part of the joy of What The Golf?; it’s effortlessly funny. Its jokes aren’t too in your face; nor are they cringeworthy. I found myself often laughing out loud at its clever puns. Its brand of humour never feels overused or tiresome. From start to finish, this is a game that’ll have you chortling – even on the odd levels that really test your patience. 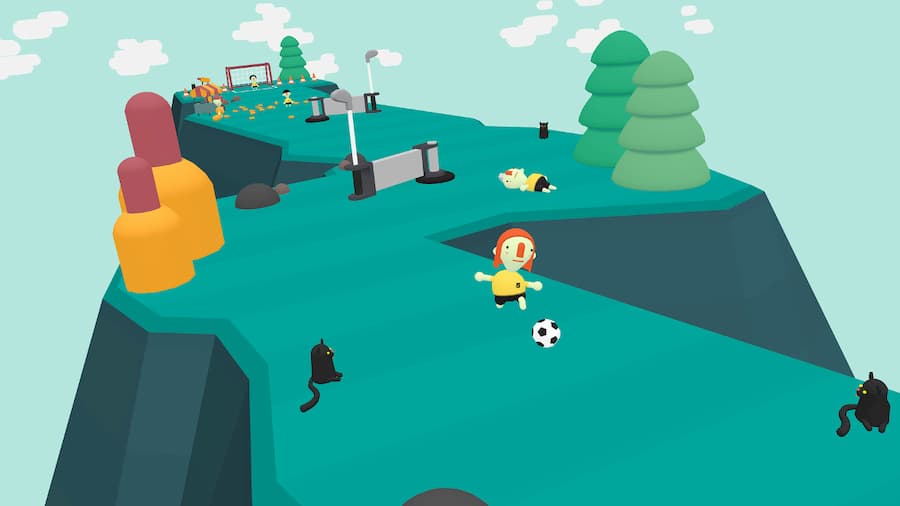 “From start to finish, this is a game that’ll have you chortling”

As you play through What The Golf?‘s multiple levels, there’ll be plenty of surprises. The same mechanics are never used in more than a handful of levels. Some might have your golf ball orbiting a series of planets. Others will have you firing dozens of golf balls at the same time. Sometimes your ball will be replaced by a man on a pogo stick; other times you’ll be in control of a monster truck. Exactly what the game will throw at you remains a mystery from one level to the next, and that’s a huge part of the fun.

There’s also some familiar themes that pop up, too. A few levels are oddly reminiscent of a certain platforming plumber, then there’s Portal, ‘Flappy Birdie’ and a few Angry Birds-themed levels. If you’ve been playing videogames a long time, you’ll chuckle at a lot of references used. The real star of the show, though, is the series of levels themed around SUPERHOT. What The Golf? lovingly borrows its stark red-on-white art style and its unique stop-and-start movement mechanic. Complete with a ‘SUPER PUTT’ message filling the screen as you complete a level, they’re an absolute joy to play. 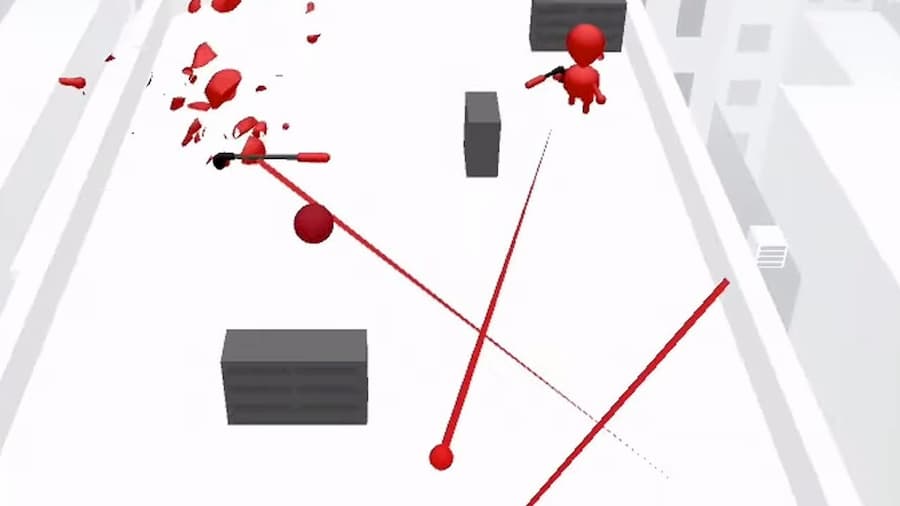 What The Golf?‘s main game mode packs in a huge amount of levels, and each one offers multiple challenges. Progressing through the game simply means completing most levels once, but for completionists, the same course will offer a further two objectives to meet. These are a mixed bag, usually making an already-ludicrous challenge even more ridiculous. But it means there’s a good 10+ hours of gameplay here, and even once you’ve completed every level, you’ll probably want to play them again at some point; they’re just that much fun.

Outside of the main mode, you can engage in a daily challenge, or take on an ‘Impossible’ challenge. The daily challenge presents you with a series of courses to complete in the fewest number of putts possible, putting your score on a worldwide leaderboard. The Impossible challenge – which warns you it’s “not for the sane” before you start playing, works in a similar way; you’ll play through a series of courses, and the number of putts you use will be recorded on a leaderboard. Except each course has been made fiendishly tricky. If you are up for the challenge, chances are you’ll give up long before you make it to the leaderboard. 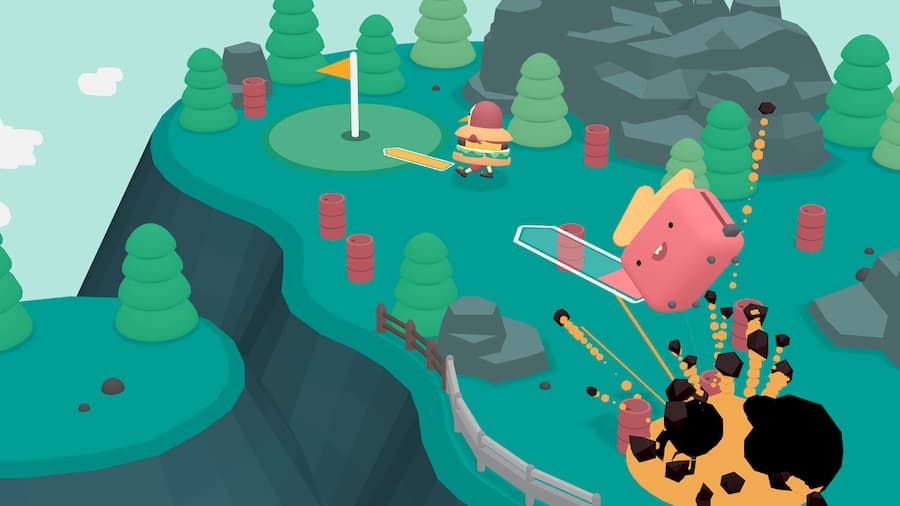 “It’s one of the most creative, hilarious and unique games you’ll find”

There’s also a local multiplayer mode, which lets you face off against a friend. You’ll play through a number of specially-tailored levels, simultaneously racing to the flagpole. The levels you play are random, but they mix up the same mechanics you’ll have encountered in single-player. Expect to use jetpacks, hit footballs and even knock down cats. Your wins will be tallied up and these will equal your ‘hit points’ in the final showdown. That showdown entails you and your player two facing head-to-head in a sumo-style arena, where you’ll try and inflict damage on each other. The first player to lose all their hit points loses the game. It’s short-lived, but it’s a lot of fun, and the sort of thing that’s easy to jump into time and again.

The biggest disservice you can do to What The Golf? is to simply assume it’s some kind of arcade golf game. Not even close. It’s one of the most creative, hilarious and unique games you’ll find. A mix of puzzle solving, arcade fun and downright zany concepts, it’s pure entertainment at its finest. What The Golf? is exactly the kind of joyful experience we all need in our lives right now.

What The Golf? is available on PC, iOS and Nintendo Switch. We reviewed the game on Switch with a code provided by the publisher. 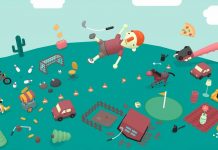 What The Golf? is Coming to Switch Next Week