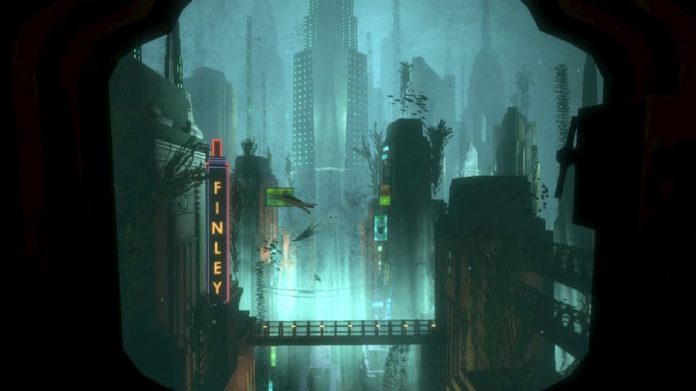 An obscene number of games have been ported to Switch since it was released. Some of them have turned out good, others bad.

Thankfully, Bioshock: The Collection is on the good end of the scale. In fact, two of the three games included have made the transition over to Switch phenomenally. It’s just Bioshock: Infinite that lets the package down a little.

Going back to where the series started, the original Bioshock is a classic. Plunging you into an undersea utopia gone wrong, it’s a first-person shooter that successfully incorporates stealth, horror and puzzle solving into its thoroughly entertaining gameplay cycle. What really makes it great, however, is its story, which has you gripped from beginning to end. To say anymore would spoil it, but if you’ve never played Bioshock, you really should give it a go.

“Virtuous has done a fantastic job porting Bioshock, keeping the detailed visuals intact while not compromising on performance”

Bioshock is as good as it’s ever been on Switch. Virtuous has done a fantastic job porting the game, keeping the detailed visuals intact while not compromising on performance. The framerate appears to stick at a solid 30fps which is all you can ask for on Switch, and the resolution never drops too much to accommodate it. I’d go as far as to say that it might even be the best-looking game available on Switch right now.

Bioshock 2 is equally impressive. Upon its original launch, it copped a bit of stick for essentially feeling like an expansion to Bioshock rather than a sequel, and while that’s still true, it deserves some recognition for being a truly good game. While Bioshock casts you as a man thrown into a bad situation, in Bioshock 2 you’re in control of a Big Daddy; a lumbering gargantuan out to rescue the Little Sister he was meant to protect. It changes the gameplay up somewhat, and presents its own interesting narrative. 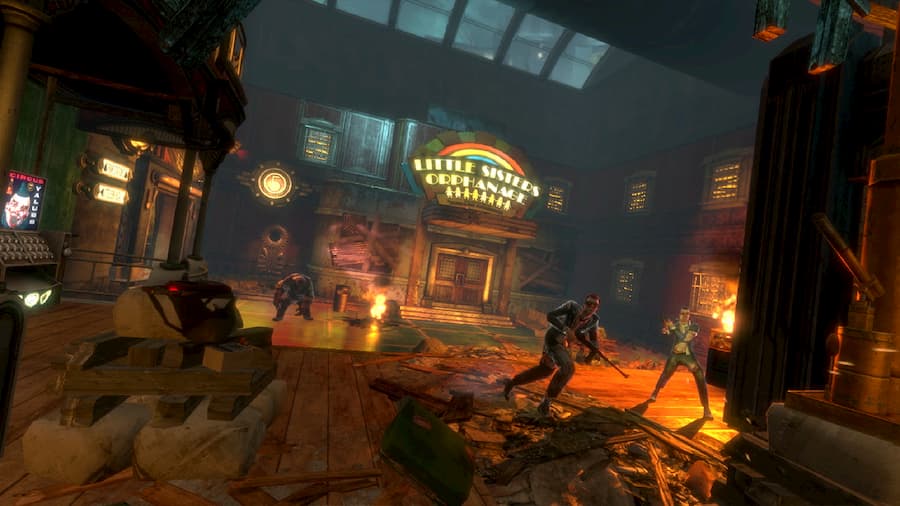 “Bioshock: Infinite is where Bioshock: The Collection starts to falter”

More action focused, Bioshock 2 equips you with a fearsome drill for an arm and more destructive weaponry, but like the first game it also gives you access to Plasmids that grant you a range of truly fantastical abilities. Electrocuting enemies stood in water or stopping rockets in mid-air and returning them to their sender never gets old, and both Bioshock 1 & 2 reward you for experimenting with the tools available to you. Combined with an environment that is claustrophobic yet also rife with areas for you to explore, it’s a game that’s not to be missed.

Unfortunately, Bioshock: Infinite is where Bioshock: The Collection starts to falter. Leaving the underwater Rapture behind, it transports you to the airborne city of Columbia. A number of changes make it vaguely feel like a Bioshock game, such as a two weapon limitation, more linear structure, and an even greater focus on combat. Those changes wouldn’t be too bad if the combat itself didn’t feel more restrictive and less outlandish. Everything feels toned back and streamlined. 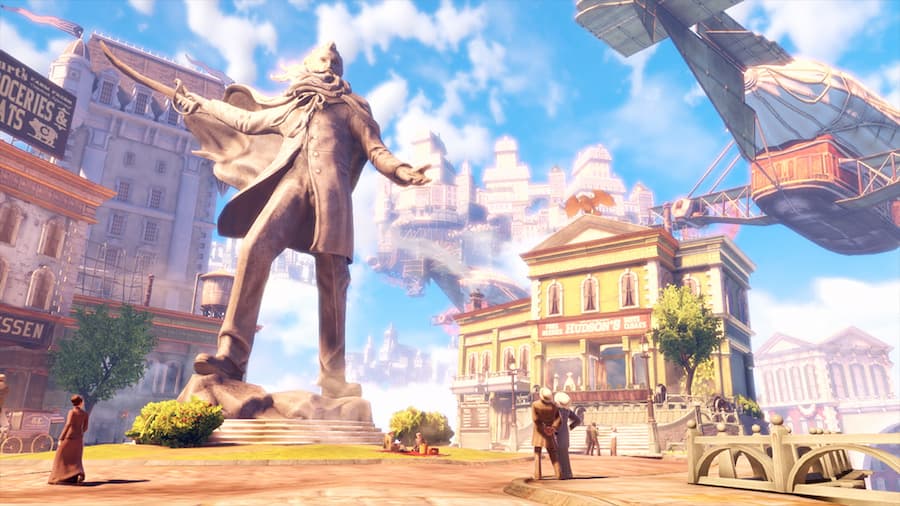 Bioshock: Infinite‘s story is also more Marmite than the previous entries. Some have hailed it one of the best stories ever told by a video game; others, like myself, think it’s a load of old twaddle. I guess you won’t know how you feel about it until you play it. What really brings Bioshock: Infinite down, however, is its save system. Out is the ability to manually save your game, and in is an automated checkpoint system. Without keeping an eye out for the saving icon appearing in the upper right-hand corner of the screen, the only way to check when your progress was last saved is to select the ‘Exit to Main Menu’ option for a warning.

Additionally, Bioshock: Infinite‘s menus won’t impress those who like to make use of the Switch’s handheld mode. While all the menus in the original Bioshock and its sequel make good use of the entire screen and have large text, one of Bioshock: Infinite‘s most crucial menus, used to change equipped gear and view information about weapons and tonics, is squished into the middle of the screen. The text and icons are tiny as a result, making them very hard to comprehend. And of course, it’s even worse if you have a Switch Lite. Hopefully the menu can be altered with a patch. 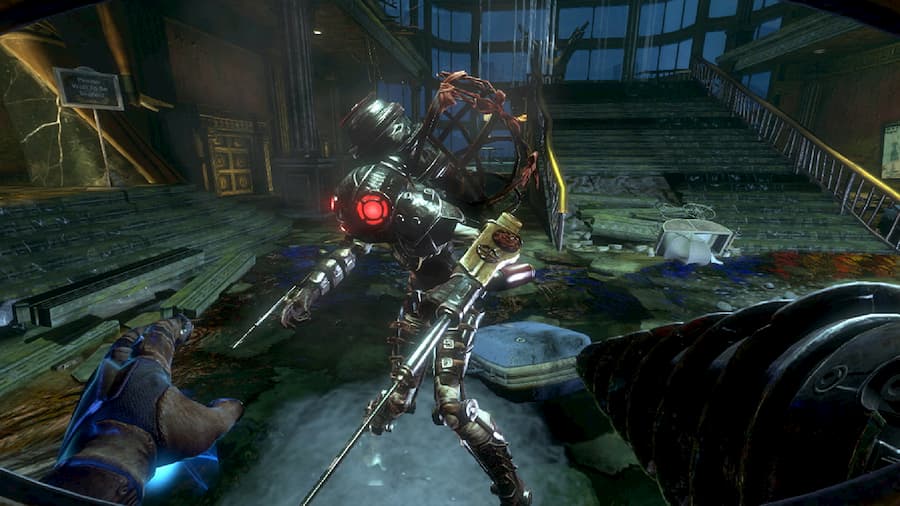 In any case, all three games include the DLC released for them, which means you get the excellent Minerva’s Den for Bioshock 2, both Burial at Sea chapters for Bioshock: Infinite, and more. Overall, there’s hours upon hours of compelling gameplay to be found, along with some of the best visuals on Switch to date, and three wonderful soundtracks.

“These titles have mostly stood the test of time, and still present some of the best video game storytelling to date”

For £39.99/$49.99, Bioshock: The Collection on Switch offers a lot of bang for your buck. It’s just a shame that Bioshock: Infinite isn’t as good as the other two games in the collection and presents an additional issue for those who like to play in handheld mode. Still, each game is also available separately for £15.99/$19.99, so you could just skip it and save a bit of money if it doesn’t interest you.

It can’t be denied that Virtuos has done a great job porting Bioshock: The Collection to Switch on the whole. All three games are complete, look great and perform well. It’s just Bioshock: Infinite‘s problems, both old and new, that let it down. Still, if you’ve never played these games before and have a Switch, you’re bound to have a great time with them. These titles have mostly stood the test of time, and still present some of the best video game storytelling to date.

Bioshock: The Collection is available on PS4, Xbox One, Switch and PC. We reviewed the Switch version with a code provided by the publisher.