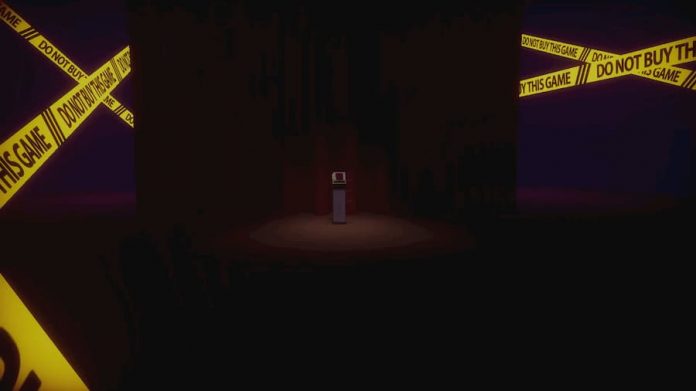 Do Not Buy This Game isn’t out until later this year, but a free-to-play prologue will give you a taste of what to expect.

There’s nothing flashy about Do Not Buy This Game. In the Prologue, you start in a dark room, with a bit of red to follow. Soon after, you begin to walk around and you’ll hear the voice of the narrator in your head. He’s begging you to turn around and rethink what you’re doing. It’s what comes after that will pull players in.

There’s a big red button within your reach, and the narrator really doesn’t want you to press it. That’s your goal during this 15-minute demo; the narrator will do everything in his power to stop you, but it isn’t hard to thwart him. But 15 minutes is enough to fall in love with Do Not Buy This Game‘s bizarre but wonderfully executed concept.

When the full version of Do Not Buy This Game is released, it will likely be a comedic walking simulator similar to The Stanley Parable. Players are able to walk around the environment and interact with objects all while the narrator is guiding them along.

But even though the overall atmosphere of the game is comedic, there is a serious message to be found: the creator doesn’t think anyone will like his game.

It’s a fear that we all have: others not liking the things that we create. But the narrator’s self-doubt is what will quickly pull you in and make you want to play more. It isn’t just about some silly button pressing (although to be honest I could press buttons all day); there’s much more than meets the eye, and I can’t wait to play the full story.

Go over to Steam to wishlist Do Not Buy This Game if you like the look of it. We’ll have more on the game closer to release. In the meantime, the Prologue is available to try for free during the Steam Summer Sale, and you can watch us play through it in the video below.