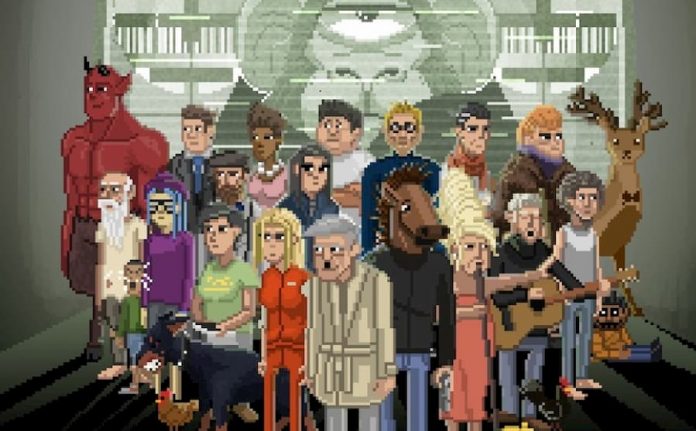 As a concept, Do Not Feed The Monkeys grabbed me instantly. Its execution, however, left me feeling unsatisfied.

In Do Not Feed the Monkeys, a self-described ‘voyeur simulator’, you’re put in the role of a new member to an exclusive ‘club’. Few other details of this club are ever revealed to you, but as a member you’ve been given access to ‘cages’ that you must monitor over time. Those cages? They’re actually hidden cameras in a variety of locations.

Some cameras simply show the usual scene you’d expect to see on CCTV; a shop window, a museum, or an empty factory. But others give us an exciting glimpse into someone’s home or workplace, making us privy to situations we know we shouldn’t be watching.

“Do Not Feed the Monkeys delves into some surprisingly dark areas”

When you start out in Do Not Feed The Monkeys, you’ll have access to only four cameras. Depending what the scene is, you may or may not be able to interact with them all. Some cameras seem to be empty filler, but others can be scoured for detail, and interacted with in interesting – and sometimes terrible – ways. Certain items can be clicked on, which in turn adds a key word to your notebook. Often, those words alone don’t amount to much – maybe ‘country’, or ‘old man’. But if you manage to catch something interesting in a conversation – such as a location or a surname – you might be able to piece together a narrative.

You see, the key words you jot down in your notebook can then be searched for online. You can search words individually, or paired with another. Search results can often be fruitless, but sometimes you’ll catch something new. Either more keywords to add to your notebook, or a gem of information: maybe someone’s name or contact information. 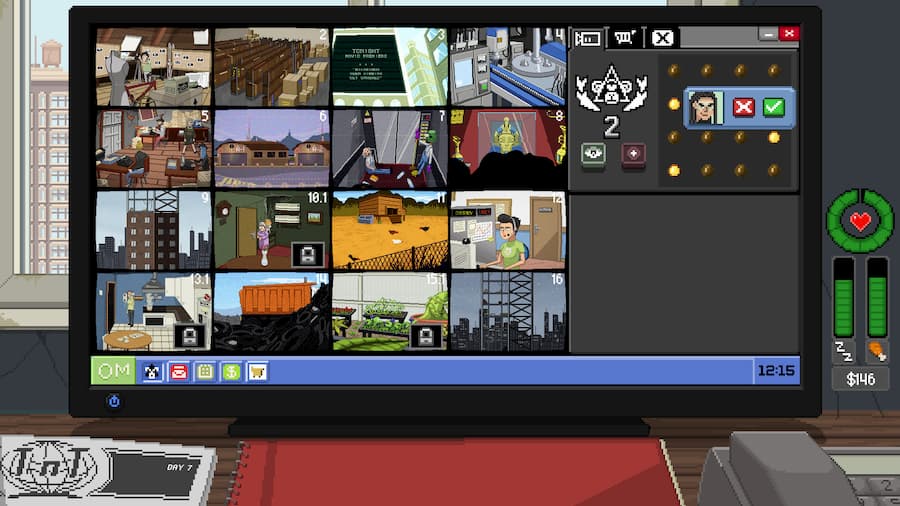 How – or if – you use that contact information is up to you. You don’t need every piece of information that Do Not Feed The Monkeys gives you; often, it’s down to you and your own curiosity if you wish to dig further. During the course of the game, you’ll receive emails from the ‘club’ asking for a piece of information. Perhaps this is the exact location of a cage, or a specific piece of information about it. Providing the right answer will net you a cash reward. But you’ll not be asked this of every cage you can snoop into. Snoop too far, and you’ll often find that the cage is taken out of your control, leaving you unable to reap any rewards from it.

One of my ‘club’ tasks asked me to find out the name of the security company monitoring a store I could see inside. On the camera was a sleeping clerk with a shotgun behind the counter. I witnessed a fraught shopper try without success to wake him up. I then witnessed a robber come and take money from the register without any restraint; the shopkeeper remained fast asleep. It was only after this that I managed to correctly research a phone number for the store. Pleased with my success, I dialled the number. It woke up the sleeping man – but with disastrous results. In his sleepy haze, he thought he was still being robbed. He grabbed his shotgun and fired it at the innocent shopper stood in front of him. Shit. That particular cage was then marked as ‘closed’, and I was unable to continue poking around to find the answer I needed. 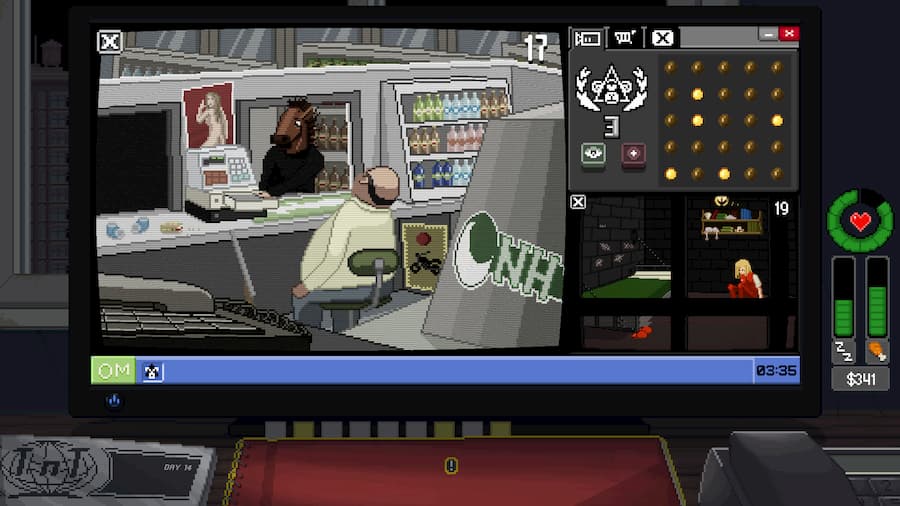 Do Not Feed the Monkeys delves into some surprisingly dark areas, though its pixel art veneer somewhat masks the fact. You rarely see anything particularly gory or grim – a blood spatter was all that told me of the shopkeeper’s actions – but there’s plenty of suggestion. A woman in a dominatrix outfit, for example, before leading her partner off-camera. Someone spying on their neighbour from their attic window, proclaiming about their nudity. An old man with an unhealthy fixation on genocide. It leans into the questionable just enough to pique the dark side of our human curiosity. And if the game had doubled down on those areas, it might’ve been enough to be a cult success.

Sadly, Do Not Feed the Monkeys tries to fill too many niches, and as a result ends up damaging what makes the game so interesting in the first place. Away from your computer screen, filled with hidden cameras, you also have an energy meter and hunger meter to maintain. You’ve rent to make too, so in order to pay your bills and buy food, you’re going to have to get a job. Working goes no more in-depth than clicking on a job ad, but it’s a drain on your time and energy. Your bank balance may go up, but you’ll lose time. It’ll also tire you out, so you’ll lose even more time by sleeping. 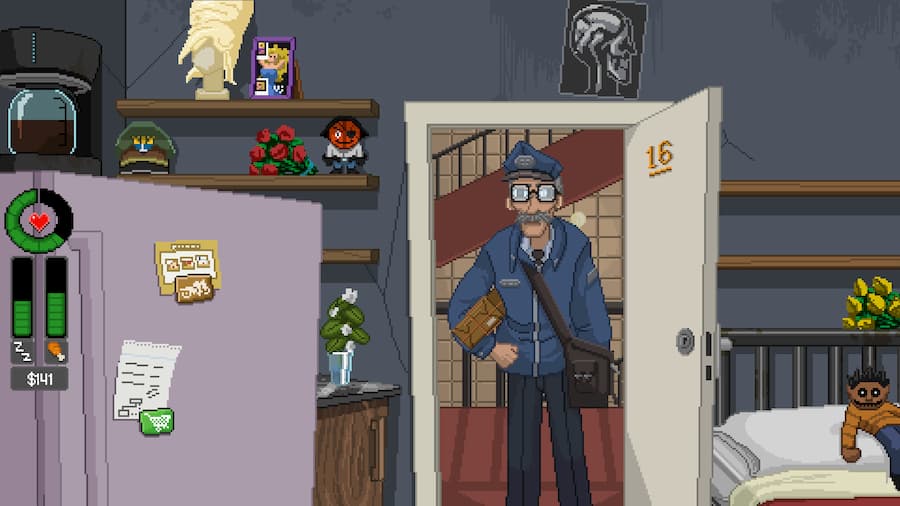 The inclusion of these basic survival elements makes it seem like Do Not Feed the Monkeys can’t quite decide what it wants to be. Add in to the mix bizarre and seemingly ineffectual door calls from your neighbours, the postman and some religious cult members, and you’re left with a rather confused product. It feels like Do Not Feed the Monkeys wants to be edgy and thought-provoking – but tries too hard to do it.

Thankfully, there is an option upon starting the game that lets you downplay the life sim elements of it. You’ll still need to eat and sleep, but meters drain much slower, allowing you time to focus on surveillance. I’d recommend taking this option; playing on the standard setting, I was constantly fighting a losing battle to earn enough money to feed myself, progress the story and pay rent. Do Not Feed the Monkeys would have felt much more accomplished without these side concerns. I’d have loved more opportunity – and more reason – to delve further into the goings-on in each of my assigned cages. As it is, many of them felt like a wasted opportunity.

Do Not Feed the Monkeys isn’t a bad game by any means. It’s a wholly interesting concept; sneaking a peek into people’s secret lives is darkly exciting, and picking out key pieces of information to pull together a narrative makes you feel like a true vigilante detective. But it’s short-lived, and the unnecessary focus on survival elements takes the fun out of it. A sizeable assortment of camera locations means a second playthrough might show you something new – but it’s debatable whether you’ll be bothered to go through it again.

Do Not Feed the Monkeys is available on PC and Switch. We reviewed the game on Switch with a code provided by the publisher.