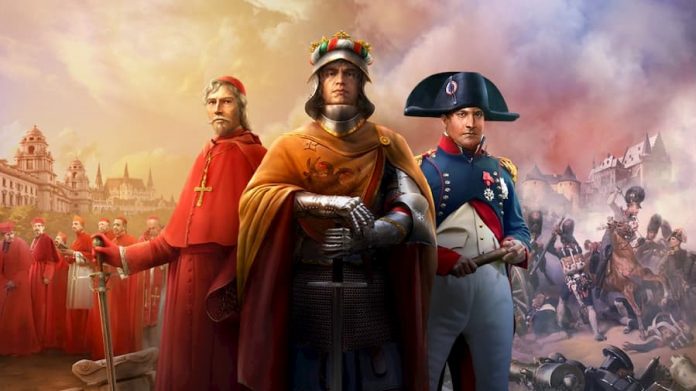 Okay settle down, this is a big DLC.

It’s hard to discuss the new Europa Universalis IV DLC in isolation. Accompanying the Emperor DLC is the one of the greatest overhauls the game has seen in a fair while, coming in the form of the 1.30 patch. This patch not only drastically changes the landscape of Europe but changes how you manage your state. There is a great emphasis on how you manage and control your state and the estates system has been completely reworked to make this happen.

All of these updates come free with the patch. As do some other minor tweaks and quality of life inclusions and at first it was hard to see the wood from the trees. So even without purchasing the Emperor DLC, you’re going to find some huge changes in Europa Universalis IV. So many, in fact, that it’s hard to tell what content comes from the DLC and what comes from the patch. For the first few hours of gameplay I was so overwhelmed by the patch that I didn’t realise that the DLC wasn’t installed, such was the drastic nature of the changes.

“Europa Universalis IV is drastically more difficult, but in a way that feels right”

Many of these changes are just for quality of life, such as the simple ‘core all’ button. But, as mentioned above, there has been a rather large overhaul to the way states and estates are governed. To explain the changes would take an article all on its own – but the upshot is that managing your empire is a tug-of-war between different estates in a country, and going in a direction you want takes mastery of these estates. No longer do you just use them every 20 years for free money and mana.

This has made Europa Universalis IV drastically more difficult, but in a way that feels right. You are reliant on these powerbases for your might and so you must appease them or make yourself strong enough without them. The Emperor DLC itself adds to these mechanics, giving you more options within the estate system, while also giving it a larger role within the Holy Roman Empire (HRE). 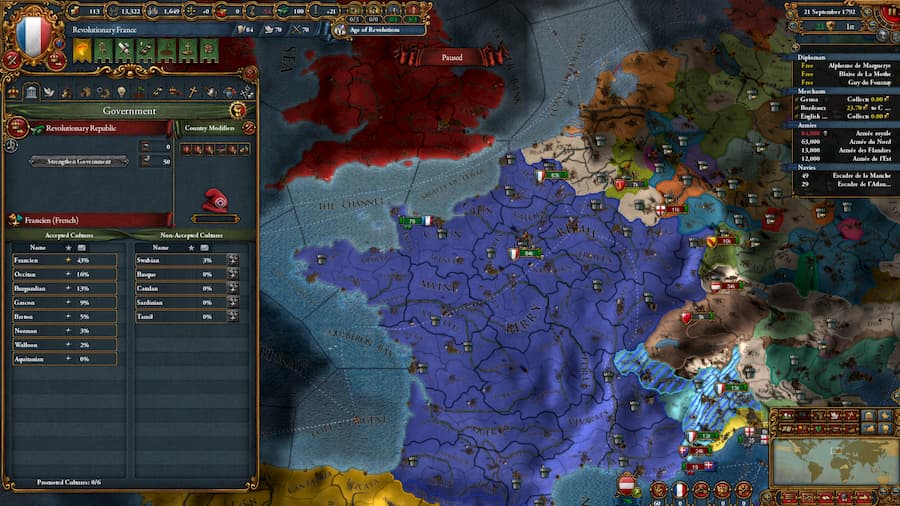 Let’s first start with the ‘holy’ part of the HRE…

“Emperor makes Catholic nations much more of a player on the stage, which is a huge improvement over the base game”

Catholicism has, for a very long time in Europa Universalis IV history, been somewhat of a limp religion compared to its counterparts. Continuing as a Catholic nation in Europe past reformation has never been that beneficial (except in niche situations), and the gameplay was simply less fun. You were flogging a dead horse in what should have been a crucial pivot point for the religion.

The Emperor DLC has changed all of this. The papal points are still there and you can still spend them in the same ways, but the role of the Pope has expanded, as has their influence over Catholic countries. First of all, the curia controller can enact certain papal bulls that give small benefits to all Catholic countries. That means there is more importance in becoming papal controller. There’s also a papal treasury that you can add to for papal influence. This comes more into focus during the reformation and the deadly reformation wars where you will need to invest in your religion in order to combat the rising protestant movement. Emperor makes Catholic nations much more of a player on the stage, which is a huge improvement over the base game.

The other big focus of the Europa Universalis IV: Emperor is the Holy Roman Empire itself. Known for not being holy, nor Roman and having far too many states, Paradox has only gone and added a whole bunch more. But it isn’t just the amount of states that impact on the HRE; the empire is much more adaptive and responsive. Firstly, if you are able to steer the HRE through several reforms then you can make the choice of whether to follow a more centralised or decentralised model. The centralised model allows you to form the HRE proper and consolidate all the nations under one banner. Doing this means you’re effectively getting a lot of development and provinces for free.

However, if you take the other option you can leave the HRE in a more open state for the rest of the game. While you won’t inherit the states inside for free, you will be able to use the powerful states together for some wars and expand the empire by declaring war on neighbouring states with a treaty option being the assimilation of them into the HRE. This makes the empire much more engaging later in the game; you still have to balance electors and rogue princes, but you get great bonuses and the weight of 50 or more princes behind you. 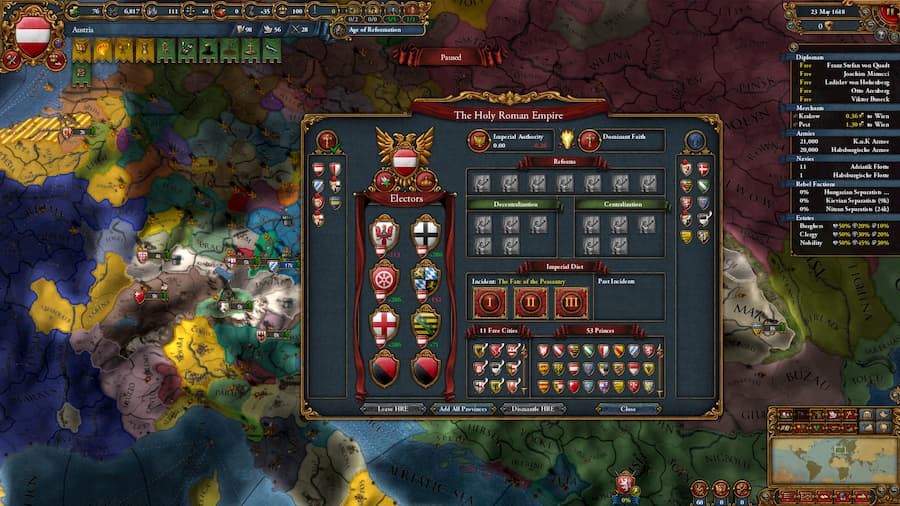 This is all added to with new special events called ‘incidents’. These events affect the princes and dukes within the HRE and make for an adaptive situation within the empire. By choosing which side of the fence you sit on, these incidents can lead to advantageous scenarios where you can seriously change the outlook of central Europe.

This is the crux of the Europa Universalis IV: Emperor, with the added mission trees being the icing on top. With the DLC, most nations within Europe have gained an individual mission tree, and most of those that already had one have had it expanded. It isn’t just the same old battles happening by the same old powers; your influence stretches beyond your borders and will affect how the resulting nations react.

“Universalis IV: Emperor is an an essential purchase if you want to feel the real struggles of power in Europe”

If you have been looking forward to  Europa Universalis IV‘s game-changing 1.30 update for a while, you’ll be glad to hear that it’s made the game feel that much more real. The power dynamics involved in managing estates, power and control within your empire are much more engaging; and the way this develops throughout different ages and incidents feels much more natural. Simply put, it gives you the roleplaying feeling of managing an empire. It’s exactly what I hoped for from this update.

Adding to the mix the Emperor DLC and the extra decisions, missions and incidents it imposes onto Europe, and you’ve got a wholly upgraded experience. The wrestling matches for power and influence become that much more apparent, that much more important and actually – very unlike Europa Universalis IV of the past – much more clear.

While the free update adds enough changes to be worthwhile on its own, Europa Universalis IV: Emperor is an an essential purchase if you want to feel the real struggles of power in Europe.

Europa Universalis IV: Emperor is available on PC. We reviewed the game with a code provided by the publisher. 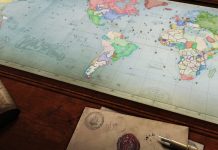 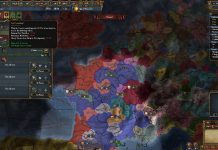 Everything You Need to Know About Estates in Europa Universalis IV