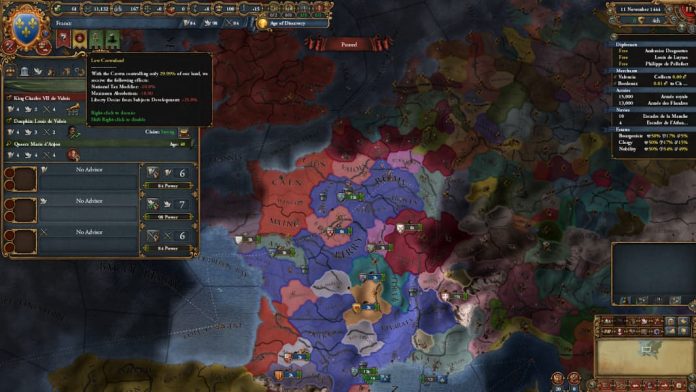 Accompanying the arrival of Europa Universalis IV: Emperor is the new 1.30 patch that majorly overhauls many key aspects of the base game.

The area where this is most felt is in Europa Universalis IV‘s estate system. It’s been completely redesigned to feel more dynamic and to better represent the tug-of-war between internal powers.

If you’re struggling to get to grips with the changes, here’s everything you need to know about estates.

What are Estates in Europa Universalis IV?

Estates are the factions within your empire. The estate system represents their wants and their power to enforce their desires. Instead of estates holding individual provinces, there’s now a nifty pie chart that shows us how much land they control. The red section is nobility, blue is burghers or merchants, and yellow is the clergy/church. The rest of the pie, the white part, is land you directly control.

You can see the pie chart on the left-hand side of the screenshot below: 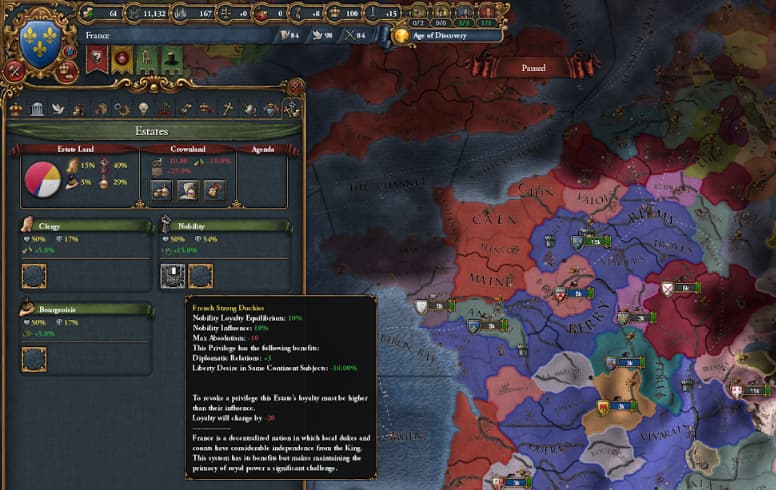 In essence, the more land you directly control, the more power you have within your own state. If you don’t have enough, you are at the whim of the major parties within your nation. If you don’t have enough crown land you’ll have negative modifiers to your tax income (you can’t tax powerful vassals), high liberty desire, negative autonomy change (signifying the lack of control you have over provinces) and less absolutism. But if you do have a high percentage of crown land, then these penalties are reversed to become benefits in your favour.

On the whole, this better represents the force and control you have within your empire. But this begs the question; why would you choose to give away crown land?

There are three general options available to you that affect crown land directly:

Sale of Tides is an option you can make every five years. If you select it, you sell 10% of your crown land for a significant sum of ducats and 10 loyalty to all estates. This 10% is split between the three estates so they maintain their balance of power at your expense. But the amount of ducats you receive may be paltry compared with the benefits of high crown land.

Seize Land is essentially the opposite of Sale of Tides. With this option, you seize 5% of land (in a representative way) at the expense of 20 loyalty. This may be worth it, but making your estates angry can have some dire effects. Having negative loyalty with the clergy, for instance, will lower your religious unity and prestige. Loyalty can be increased, but will always drift to an equilibrium over time. It’s now harder to gain instant loyalty to exploit these mechanics.

Summon the Diet increases the loyalty and influence of each estate. Influence is generally dependent on crown land but other factors can affect this number and their power over you as ruler. When you pick the Summon the Diet option, you will be given an event that lets you pick one of three agenda missions for you to complete within 20 years, one suggested by each of the estates. Upon completion of these, you’ll gain 10 loyalty of the corresponding estate and a unique bonus. Failing this agenda will lead to a negative 10 to the loyalty equilibrium. Don’t let this dissuade you; these agenda bonuses can be very powerful. 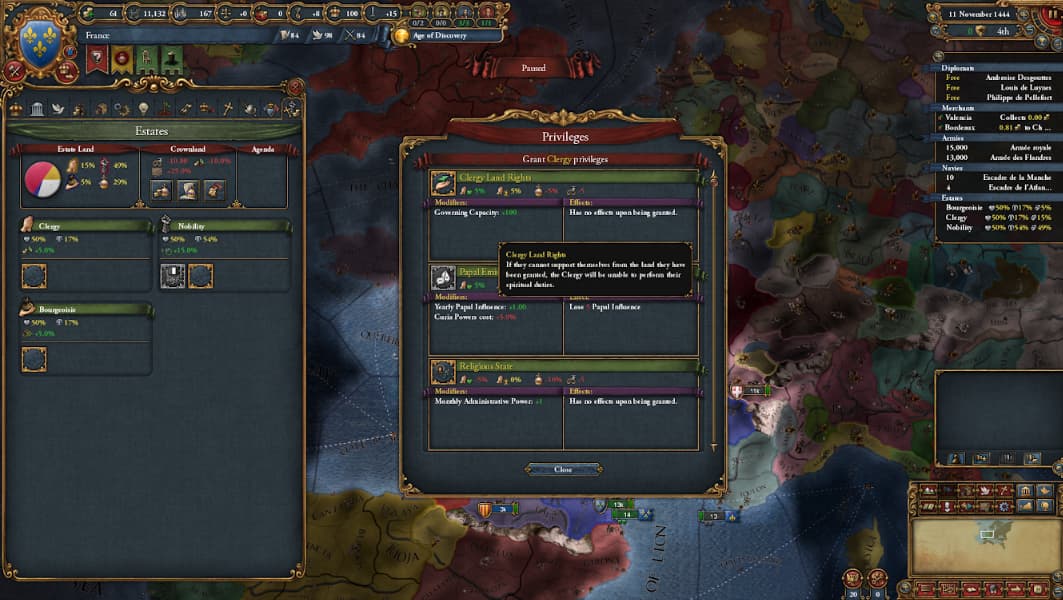 Outside of those three options, each estate can be given up to four estate privileges. Each has its own benefits and modifiers.

Each privilege will potentially have costs or benefits on estate loyalty, estate influence, crown land and absolutism. For example, each estate can be given a ‘Land Rights’ privilege which increases their loyalty and influence by 5%. But it costs 5% of total crown land and lowers your max absolutism by 5. This will then also give you the benefit of an extra 100 governing capacity; and unlike other privileges it doesn’t have any other (negative) modifiers.

These privileges can be fairly powerful and are worth at least looking at – especially earlier on in the game when the absolutism mechanic hasn’t been enabled. As your state ages and the powerful absolutism modifier is enabled, you may want to curtail the rights of these factions to gain a stranglehold over your nation. Also, there are specific privileges that only some nations have access to. France, for example, starts with ‘French Strong Duchies’, giving it enough diplomatic slots for its buttload of vassals. Some privileges are also locked behind the Emperor DLC.

There are a few extra things you can do in Europa Universalis IV, outside of the estates tab, that affect your crown land and your control on your nation. Namely, you can increase the development of a province. By doing so, you are actively building new land under your control and therefore owning more crown land. When you gain new provinces you will also gain some crown land, though parts of this new land will be divided up representatives between the estates.

Overall, this should give you an idea on how the push and pull of estates in Europa Universalis IV work. It is now a more complicated system, but it works better to show how the internal power of your country is working, how you can balance it for particular benefits, and how this may need to change over time. 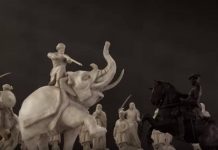 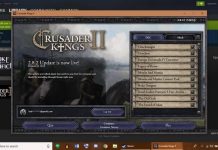