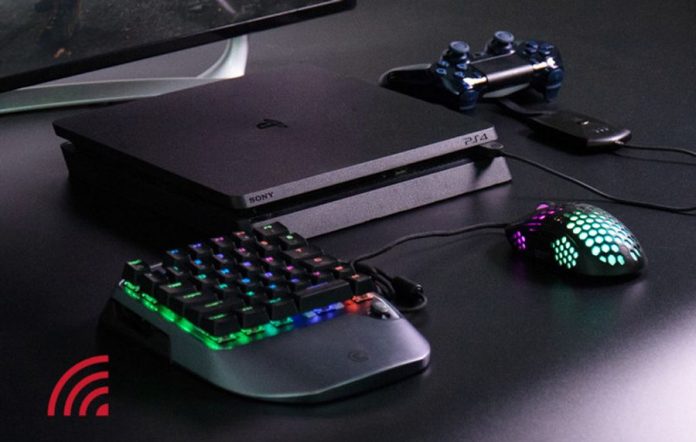 I ran ‘GameSir’ through multiple translation apps just in case I was missing some hidden meaning behind the brand. Seemingly not; this really is a range of peripherals that sound like they’ve been crafted by a Victorian inventor.

The GameSir VX2 AimSwitch is the latest offering in the series. Partly funded via IndieGoGo, it’s a boon for any console player who has resented their mouse and keyboard-using PC brethren. It can also be used on the PC – though unless you’re using a desk for ants, that kind of defeats the point.

The kit includes a chunky mini keyboard and a gaming mouse, and it works with Nintendo Switch, PlayStation 4 or Xbox One. It’s designed to give you a higher degree of accuracy than a standard controller ever could; giving you a (theoretical) edge on the competition. Who knows, in a few months you could be getting booted out of the Overwatch League for expressing a dissenting opinion.

The GameSir VX2: A Delight to Use

While the GameSir VX2’s £100+ price tag suggests it’s aimed at the esports market, it’s an absolute joy no matter which first-person game you’re playing. Some third-person titles (such as Dark Souls) will also benefit, but playing the likes of Stranded Deep with this gizmo was a breath of fresh air.

Normally, I’d spend a good two minutes moving the cursor back and forth just to pick up five yucca leaves. Using the GameSir VX2, I can sweep the cursor onto the hotspots in question and click away; stuffing my pockets with leaves in a matter of seconds. Contending with sharks also got a lot easier, giving my survival chances a welcome boost.

Likewise, as someone who spends a fair amount of their time PC gaming, I loved being able to use WASD to roam around. The GameSir VX2’s keyboard does have a teeny, tiny analogue stick; but once I remembered which keyboard button was mapped to which controller button, I found no need for it.

That said, setting up the GameSir VX2 was a trial. It wasn’t the fault of the hardware; instead my problems stemmed from the poorly translated instructions. The GameSir VX2’s mouse is attached to the keyboard with a wire, and the whole thing connects wirelessly to a USB receiver. The receiver plugs into your console, then you plug your standard PS4 or Xbox One controller into the receiver.

What the manual fails to mention is that, during the initial setup, the controller needs to be turned off. I spent a good ten minutes wondering why the GameSir VX2 wasn’t working properly; until the controller shut itself off and, hey presto. it was good to go. Thankfully after the initial setup, the problem never rears its ugly head again – unless you swap the kit to another console. 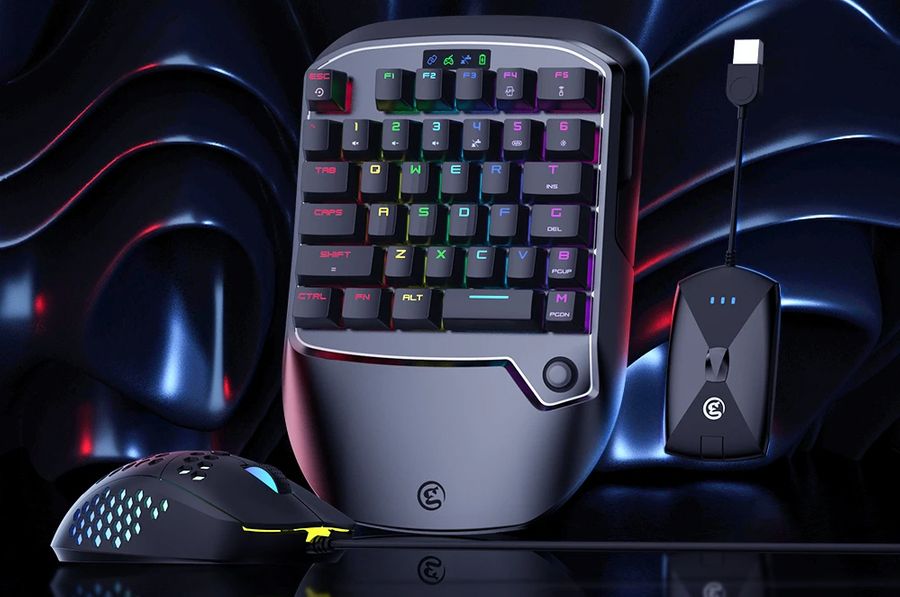 Since the GameSir VX2 essentially emulates the controller, it’s not quite the same as using a mouse, though it comes damn close. If a game includes official keyboard and mouse support, you’ll get better performance plugging the GameSir VX2’s mouse straight into your console. Take Fortnite, for example; with a mouse plugged directly into your PS4’s USB port, you can quickly turn round by sweeping your mouse left/right. If you’re playing Fortnite using the GameSir VX2, however, it won’t work in the same way.

Instead, the GameSir VX2 shines when playing many first-person games that don’t support keyboard and mouse. Stranded Deep aside, I put the GameSir VX2 through its paces with a multitude of games and it always delivered. Playing Left 4 Dead, I caught a glimpse of another player’s monster character, as often happens. But instead of fumbling with the controller’s analogue sticks, giving them time to disappear behind a truck, the GameSir VX2 let me pick them off quickly. And while I still don’t like how Doom Eternal introduces specific weak spots, this made it a hell of a lot easier to take out a Mancubus’ missile launchers. You can tap a button on the mouse to alter sensitivity if you’re finding the mouse overly responsive or not responsive enough.

The GameSir VX2’s keyboard is impressively hefty and, while the mouse doesn’t 100% match the keyboard’s aesthetic, they’re both pleasingly responsive. They sport a wealth of LEDs and, in use, both glow with the fury of a thousand imprisoned rainbows. And, thanks to the GameSir VX2’s small footprint, you don’t need a lot of space to use it; I managed fine balancing the mini keyboard on my knee, with the mouse resting on a coffee table.

There’s an unexpected bonus, too; you can plug in any USB mouse into the GameSir VX2 keyboard’s port. It doesn’t allow you to alter mouse sensitivity, but it does allow for some unique set-ups. If you have accessibility issues that make using a controller painful or impractical, for instance, you can plug in a trackball. Hey presto – you too can get shouted at for not protecting the payload in Overwatch.

Can You Safely use GameSir VX2 in Multiplayer Games?

The existence of the GameSir VX2 does raise a few questions, however. Accessibility advantages aside, is it ethical to use this to get an edge over your human competition in multiplayer games? Spearing a shark in a single player game is one thing, but when Little Billy is using a controller, desperate to win his first Call of Duty match, do you feel bad about using your extra bit of kit to headshot him in an instant?

Secondly, could you be banned for using the GameSir VX2? While it’s not specifically a cheat device, it’s a third party piece of kit that gives you a distinct advantage in deathmatch play. I contacted PlayStation, Xbox and Switch support to ask for their stance. PlayStation support didn’t get back to me, but Xbox support assured me it wouldn’t lead to a ban.

Nintendo’s support team, on the other hand, muddied the waters somewhat. They stated that if I used a third party device to “modify” my Nintendo Switch I risked a ban. It seems unlikely that using the GameSir VX2 would lead to being booted off a console’s online service, but there’s a slim element of risk involved.

Ultimately the GameSir VX2 AimSwitch isn’t cheap but it’s a great, solid piece of kit and well worth investing in if you want to boost your online gaming skills. If you’re not into multiplayer gaming, it’s a little harder to justify the outlay but it’s still worth a look. For me, Yucca harvesting will never be the same again. 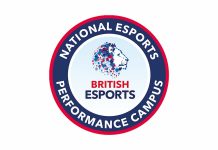 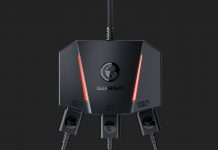