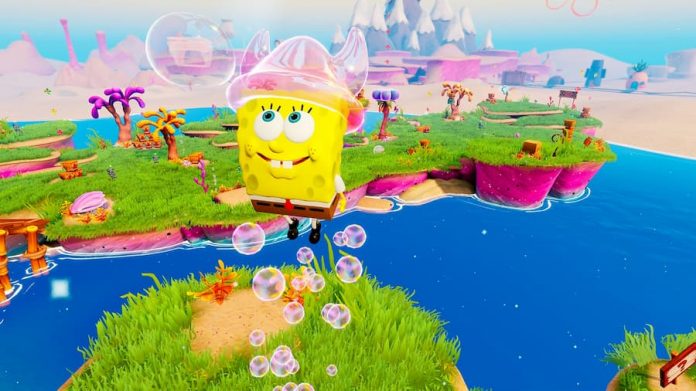 Stuck on the first boss battle in Spongebob Squarepants: Battle for Bikini Bottom -Rehydrated? Here’s how to beat Robot Sandy.

While Robot Sandy is the easiest boss in the game, it can be hard to figure out the best way to take her down. You’ll face Robot Sandy as both Patrick and Spongebob and the battle is split into three rounds.

During the first round, Sandy will try to use her karate moves to hurt Spongebob. She’ll hit her elbow to indicate that she’s about to do a jump move. Simply keep out of her way and you’ll avoid her hit. After that, she’ll jump high into the air and land right on her butt. When she’s stunned, you’ll want to use your stomp button and her head will go flying into the scoreboard, electrocuting her. Do this two more times and you’ve successfully made it to round two.

You play as Patrick in the second round. Robot Sandy will continue to perform the same moves with the addition of one other. When you see Sandy approaching the edge of the area, she’ll bounce against the bungee cords and attempt to take you out with her springy legs. Jump over her legs to avoid getting hit. She’ll then do the same move where she lands on her squirrely behind. Body slam the ground and watch her head start rolling away. Pick up her head and throw it at the scoreboard (which is now on the side of the arena) to electrocute her.

In the third round, Sandy will continue to do all of the same moves. Look out for her body slam, her butt slam and the bungee move. When she does her butt slam, you still want to body slam the ground – but Sandy has learned her lesson and won’t let her head roll away this time. At this point, Spongebob can use his bubble move; he flies briefly up into the air to hit her head and injure her. Do this two more times and you’ve defeated the robot-squirrel menace.