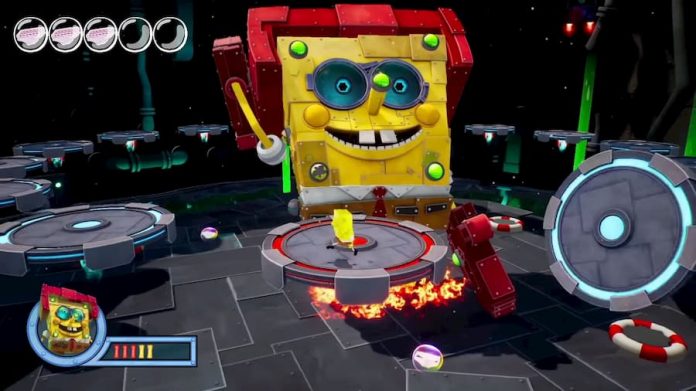 Stuck on the final boss fight in SpongeBob Battle for Bikini Bottom – Rehydrated? Here’s a guide to help you out.

Made up of Robot Spongebob and Robot Plankton, the final boss is split into two parts. Here’s how to deal with each half.

Robot Spongebob has a few karate moves that he’ll repeat over and over for the duration of the waves of his battle. First, he’ll swing his arm around, blocking one of the floating platforms that you’ll be standing on. Simply jump over onto his arm and run over to his hand and smash the green button.

The overall goal of the battle is to destroy all of the green buttons all over Robot Spongebob’s body.

Each time Spongebob swipes his hand to try and take you out, he’ll pause for a few seconds and you can use your bubble cruiser to hit the other buttons located on his body. You’ll notice, after hitting a couple of the buttons, Spongebob will be stunned and Robot Plankton will attempt to attack you. Simply jump forward and plonk him on the head to start the next round.

The second time around, Spongebob will add a new karate move to his roster. He’ll continue to do the long swipes, but he’ll also do a downward karate chop that will make the floating platforms you’re standing on spin. Jump to the left or right of the chop to avoid being knocked down to the lower level.

Take out a few of his buttons, smack Plankton in the face and you’re on to Phase 3.

In phase 3, Spongebob will literally use words to try and knock you down and injure you. Simply jump two to the right or two to the left to avoid the words knocking you off.

Everything else will be the same as it was before. Hit a few buttons, smash Plankton. Continue this way until you’ve hit all of Spongebob’s buttons and then you’ll head inside of the robot.

In this section of the Battle for Bikini Bottom‘s final boss battle you’ll be fighting Robot Plankton and some normal robots as well. Jump to the first platform, take out the robots and Robot Plankton will fly up and try to hit you with some lasers coming from his hover vehicle. Dodge the lasers and then hit him with your bubble cruiser to proceed.

Here you’ll want to take out the robots that the Duplicatron spits out at you, then bubble bowl a bubble over to it to destroy it. Rinse and repeat by destroying any robots, hitting Plankton, hitting the lightbulb and moving on.

The two final lightbulbs that you have to hit are inside of long tube-like pathways. You’ll see what looks like a big yellow opening. When you’re not being attacked by robots or Plankton, steer your bubble cruiser into the tube and hit the lightbulb inside. Do this a second time and Robot Spongebob is down.