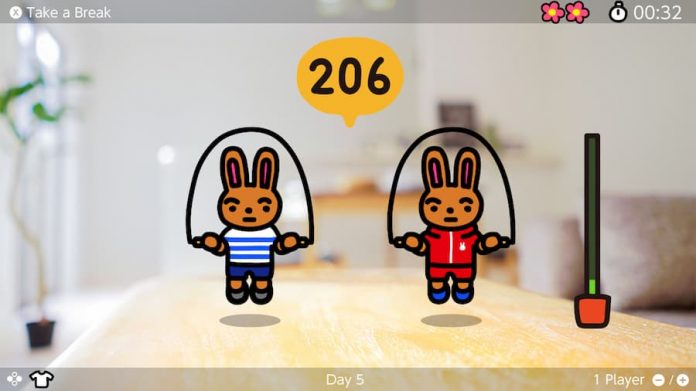 Called Jump Rope Challenge, it’s an exercise game that uses the Joy-Cons as the handles of an imaginary skipping rope. It’s designed to be played by up to two people, challenging them to reach the highest score possible. Though you can play by yourself too, simply trying to beat your own previous best score.

What’s particularly cool about Jump Rope Challenge is that it’s been made by a small team of Nintendo developers while they’ve been working from home due to the Coronavirus pandemic. It’s simple, but delightful – and the fact that it’s been made entirely from home makes it that much more interesting.

It’s seriously cute, featuring hand-drawn bunnies to illustrate your skipping movements. Each day provides you with a new challenge, with a coal that you can set yourself. It’s a great way to get in a simple bit of exercise if you can’t leave the house.

Jump Rope Challenge isn’t going to be around forever though; Nintendo has stated that it’s a limited-time release until the end of September. Be sure to add it to your library so you don’t miss out.