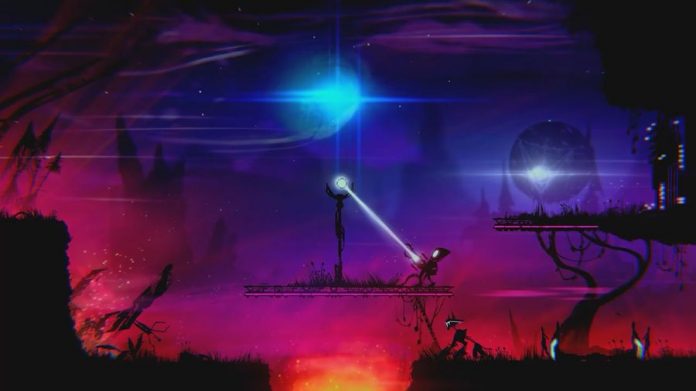 Ever wonder what would happen if gloomy platformer Limbo had a lovechild with a rainbow? You’d get Vesper, a robotic platform-puzzler set to land on PC in 2021.

This 2D outing puts you in control of a small robot who, initially defenceless, has to wend his way across a hostile alien landscape. He’s pursued by a horde of enemy machines who want nothing more to gnaw his face off with their snapping mechanical teeth or impale him with their spindly limbs.

Vesper features monochrome foregrounds, set against more brightly lit backgrounds, producing a visually striking effect. The reason the main landscape isn’t more clearly illuminated appears to tie into Vesper‘s stealth factor. Your robot will be able to hide in shadow, extinguishing light sources to produce additional hiding spots. You’d have thought that whoever was cranking out kill-bots would have given them night vision, but whoever was in charge of manning that part of the Skynet assembly line must have asleep on the job.

Your robot’s light-absorbing skills come from a piece of ancient alien technology, the Drive Gun, which you’ll stumble across during your quest. And as a bonus, you can transfer light to other areas. You can also (eventually) use the gun to “control your opponents with light and dispose of them after have exploited their abilities”. You can expect your robot buddy to go full murderbot before Vesper is over, then.

There’s no word on whether Vesper, currently set for a Steam release, will make it to other platforms; we’d be surprised if it doesn’t eventually make it to current and next gen consoles. You can step into the shoes of your little robot buddy (who, surprisingly, isn’t called Vesper) when Vesper lands in 2021. Give the teaser trailer a watch below.