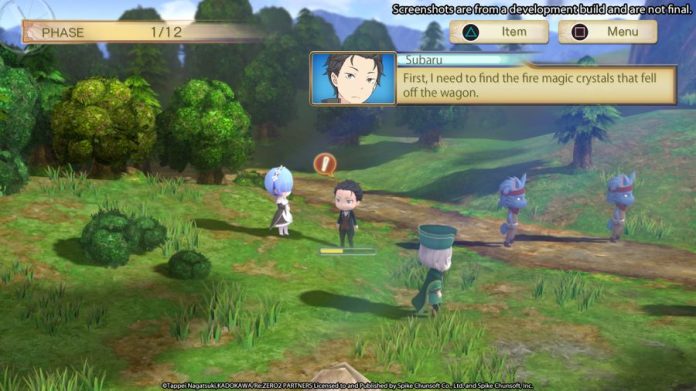 Re:ZERO – Starting Life in Another World: The Prophecy of the Throne is coming to the Nintendo Switch, PC and PS4.

Spike Chunsoft’s upcoming cutesy tactics game is based on a popular manga series – which goes some way to explaining the lengthy title. Re:Zero − Starting Life in Another World has already spawned a TV show, a visual novel and a smartphone game. So clearly there’s enough mythology to mine here.

It tells the tale of Subaru, a boy who, after playing video games all day every day, gets whisked away to a fantasy world. This leads to all manner of fantastical, soul-searching adventures which, we’re reliably informed, aren’t just all in Subaru’s head. Yes, we’ll believe that when we see it. Mark our words, the manga is going to end up with him waking up in a pile of his own sick.

Re:ZERO – Starting Life in Another World: The Prophecy of the Throne sees Subaru and friends struggling to unravel a mystery surrounding the selection of the kingdom’s next ruler. A mysterious sixth candidate has appeared and it’s up to them unravel a “mysterious web of assassinations, betrayal, and conspiracies”.

Details are relatively sparse, but we defy you not to go ‘aww’ at the cute, large-headed figures that will be doing their level best to save the kingdom. Series author Tappei Nagatsuki is supervising Spike Chunsoft and Chime Corporation’s work, so it should meet fans’ stamp of approval.

Re:ZERO – Starting Life in Another World: The Prophecy of the Throne will be available in regular and collectors editions, the latter featuring a set of character pins, an artbook, a soundtrack and more.

You can dive into Subaru’s world when it hits Nintendo Switch, PlayStation 4 and PC (via Steam) this winter.