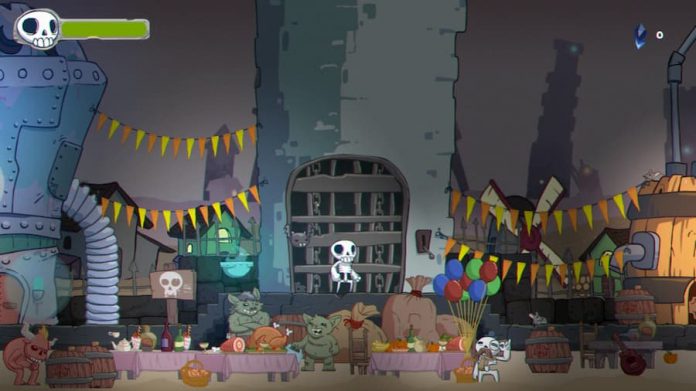 Time and time again they mess with things they don’t understand and consider themselves superior to the other creatures they share the world with. In Skelattack, they’re invading the Underworld, searching for something called the Blue Flame to save their king. But Skully and his bat friend Imber are having none of it. Having only just found out that he was a warrior in a previous life, he springs into action. Can he stop the humans before it’s too late and save the elder that he looks up to? Well, that’s down to you.

Developed by Ukuza and published by Konami, Skelattack is a 2D platforming adventure in which you play as a skeleton called Skully. You don’t play as Skully all of the time though; you also get to take control of his bat friend Imber for some sections. On their own they’re capable, but together, they’re a force to be reckoned with. Especially once they’ve bolstered their abilities a little.

“Thanks to its pleasing cartoon visuals and adorable protagonists, it’s easy to quickly fall in love with Skelattack”

While Skelattack is a platformer through and through, it does have some Metroidvania elements. Areas are labyrinthine, and often reward you for going off the beaten path. Your weapon, a fearsome bone sword, can be upgraded by finding rare pieces of metal; your health bar extended every time you drink a Bone Broth. There are numerous skills to acquire too, and spells that can be upgraded to enhance their effects. Some of these will grant you access to areas that were previously inaccessible to you, or at least make getting to them a hell of a lot easier. A lot of these upgrades can be missed if you’re not thorough in your exploration, however.

Thanks to its pleasing cartoon visuals and adorable protagonists, it’s easy to quickly fall in love with Skelattack. It simply wins you over with charm and style. After some time playing it, however, many are likely to fall out of love with it. They’ll simply begin to like it. Why? Because the controls just aren’t tight enough, and the combat is overly basic. They’re not terrible by any stretch of the imagination, but they do detract somewhat from Skelattack‘s gameplay. Especially considering some of the platforming challenges that the game expects you to overcome. 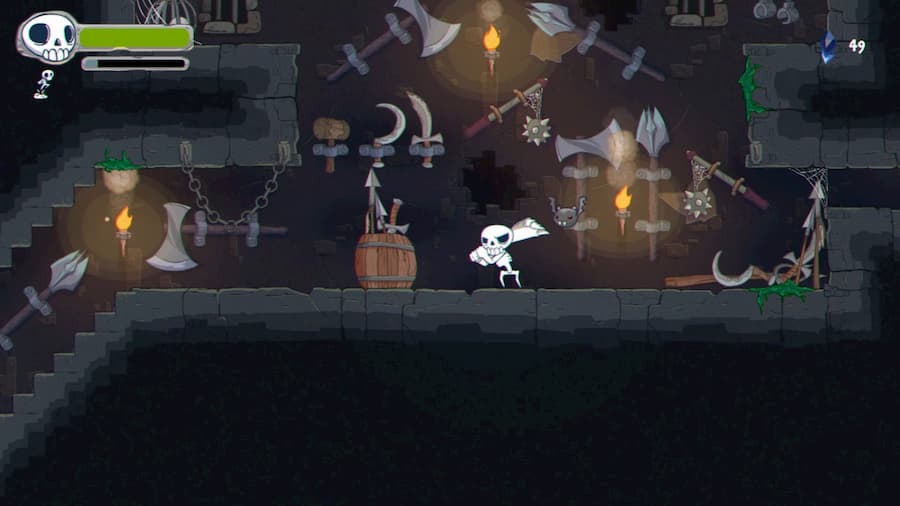 When it comes to combat, you can swing your sword in multiple directions and little else. As you can’t block, parry or backdash, you generally just get in an enemy’s face, mash the attack button and hope for the best; perhaps jumping or retreating from time to time if you anticipate an attack coming your way. For most grunts though, avoiding their attacks is more trouble than it’s worth thanks to environmental hazards that are comparably much more lethal. Combat only really comes into its own during boss fights, where genuine strategy is required, and additional hazards are at their minimum.

“When it comes to combat… you generally just get in an enemy’s face, mash the attack button and hope for the best”

Skelattack‘s hostile environments can truly be a nightmare. While enemies and their attacks will sap away at your health, many environmental hazards will cause you to drop dead instantly. Pieces of glass stuck to surfaces, Venus fly traps, swinging blades, lava; they’ll all put a swift end to your adventure. They’re in abundance, too, so much so that simply getting from A to B can be arduous and irritating. Luckily, Skelattack has such a generous checkpoint system that many will keep ploughing on regardless, however.

Blue Flames are your saviour in Skelattack. You’ll generally find one at the start of each new screen, and also sometimes quite a few between you and the exit to the next. Die, and you’ll instantly find yourself transported to the last Blue Flame you passed, keeping you in the action and eager to try again. You rarely lose more than 10 or so seconds of progress. Death does have a cost, though; every time you die, a portion of the valuable shards you’ve picked up are dropped. 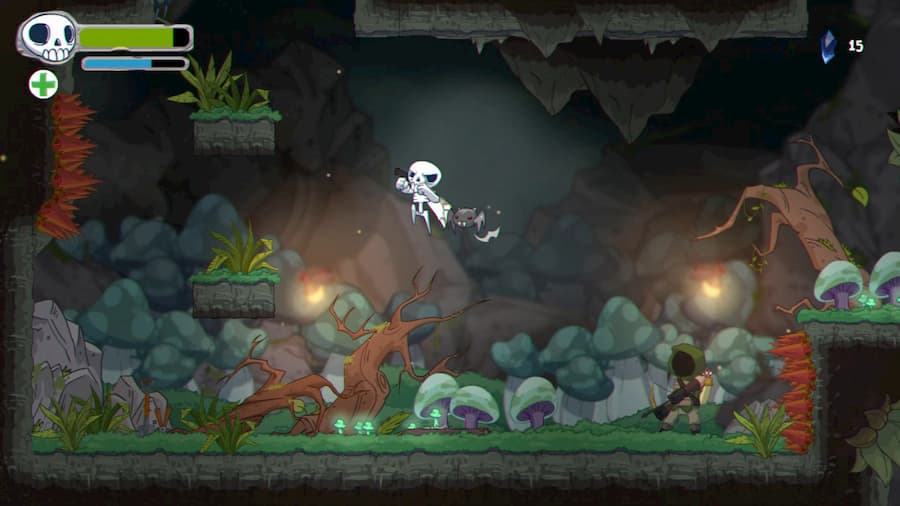 “Skelattack offers an evening of fun, with ample lashings of frustration along the way”

You can return to your place of death to retrieve the the shards you’ve dropped, but it’s not always possible. And if you die on the way there, they’re gone forever. In particularly tricky sections of the game, your shard collected can easily be decimated. And what do shards do? Well, they’re used to upgrade your spells, and also buy Bone Broth to increase your health. Without being able to gather a decent number of shards and return to town to use them, Skelattack is going to get considerably tougher.

Skelattack isn’t a very long game – most will complete it within 4-5 hours. There’s not really any reason to return to it once the credits have rolled, either. It is somewhat enjoyable while it lasts though, even if a little infuriating at times. That’s largely thanks to Skully and Imber, who are lovable every step of the way, and a surprisingly entertaining story. It’s just a shame that the gameplay isn’t a little deeper and more polished, then it could have been something special. As it is, Skelattack offers an evening of fun, with ample lashings of frustration along the way.

Skelattack is available on PS4, Xbox One, Switch and PC. We reviewed it on PS4 Pro with a code provided by the publisher.