One of the few games that’s made of LEGO without some kind of franchise attached to it, LEGO City Undercover is, without a doubt, one of the best LEGO games on PS4. It’s essentially the family-friendly answer to the Grand Theft Auto series; a vast open-world game that sees you take on the role of LEGO City police officer, Chase McCain.

While there is a substantial story to follow, the true joy of LEGO City Undercover is in exploring the world, finding secrets, and completing side quests and missions. Whether it’s helping a civilian find a lost item, taking part in a high-octane car race or chasing down some no-good criminal, there’s tens of hours of fun to be had.

Sure, it might not have the language and violence of Grand Theft Auto, but it’s a hell of a lot more fun!

LEGO Adventures With Mario Starter Course: A Delight For Both LEGO and Mario Fans 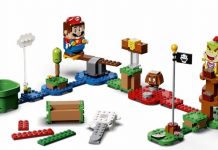