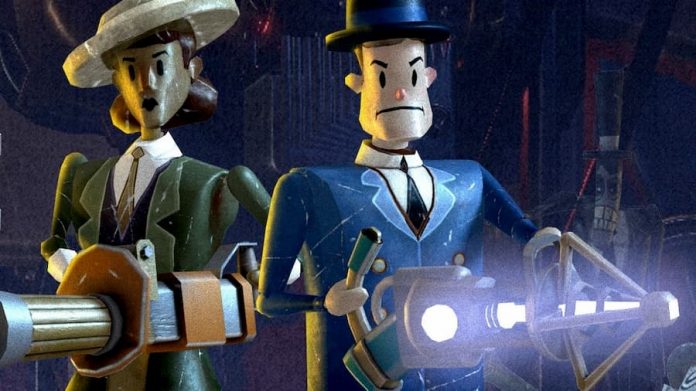 Designed to look like an old-fashioned arcade game with characters who can only move on tracks, Bartlow’s Dread Machine puts a fun twist on the typical twin-stick shooter.

Out now in Early Access, Bartlow’s Dread Machine from Beep Games and Tribetoy casts you as a government agent with a very important job: President Roosevelt has been kidnapped, and it’s up to you to track down the culprit.

Levels are short and sharp, and see you move through various, beautifully-designed locations. Starting out in New York City, you’ll move through streets and mansions on your quest, blasting bad guys and monsters with a range of weapons.

Bartlow’s Dread Machine controls like your typical twin-stick shooter: the left stick moves your character, and the right stick directs your weapon fire, with R2 acting as your trigger. The difference here is that your character is on rails, so you’re hampered as to what direction you can move. There are junctions to choose from, so you’re not always stuck moving in a straight line, but it adds an extra element of strategy. You don’t want to end up stuck in a dead end where you can’t escape from an onslaught of enemies, for example.

Enemies are on rails, too, though not always on the same rails as you. Some will be, but levels like to mix things up, putting enemies out of reach who can damage you with firepower. You’ll need to remain quick on your feet, making use of the dodge button and hiding behind cover until you can effectively land your own assault.

There’s no shortage of boss fights in Bartlow’s Dread Machine, either. These veritable foes come in a variety of menacing shapes and sizes, with their own unique attack patterns. Expect typical bullet hell-style warfare, with you dancing in between catherine wheels of bullets while opening fire yourself.

There’s a lot to be said for Bartlow’s Dread Machine‘s design. It’s beautiful to look at, with environments looking like a mixture of real-world locations and pop-up cardboard props. It’s a delight, standing out from the crowd. A range of difficulty options help make the game accessible to most players, too, although even on ‘Easy’, the boss fights are designed to give you a run for your money.

The developers are planning to keep Bartlow’s Dread Machine in early access for just two months while they’re finishing up the later levels. Currently, the game’s first three worlds – New York, Into the West and The Pacific Coast – are available. All going to plan, new levels will be added every few weeks before the full game launches in late September. More characters will also become available in the full release.

If you’re looking for a twin-stick shooter with a flavour all of its own, Bartlow’s Dread Machine is well worth a peep. It’s one of those rare games that doesn’t feel like it’s Early Access; despite missing its later levels, the content that is present is fully fleshed-out and very nearly feature complete. You aren’t simply playing an alpha build of an idea. We’ll certainly be jumping back in to Bartlow’s Dread Machine during its Early Access period, and we’re looking forward to getting our hands on those later levels. 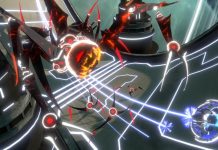 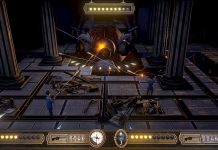