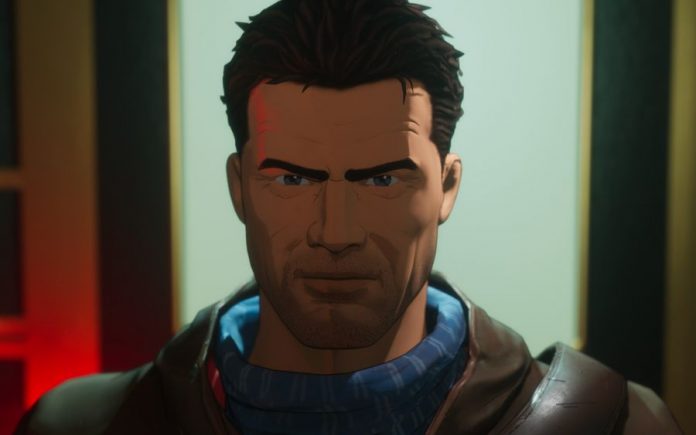 Robert Foster is always right; that’s the message I was left with as Beyond a Steel Sky’s credits rolled.

A sequel to 1994’s Beneath a Steel Sky, this third-person adventure can be funny, charming and rewarding. But there’s a note of arrogance running through it that reaches a crescendo as the game draws to a close. Protagonist Robert Foster is not a man who’s prone to self-examination, even in the face of his own folly; his unwavering assuredness starts to grate, to Beyond a Steel Sky’s cost.

You don’t have to have played Beneath a Steel Sky to understand Beyond, but if you already know who Foster is, you’ll spot plenty of shoutouts to the previous game. At the conclusion of Beneath, Foster escaped the futuristic Union City, leaving his robot companion in charge, and went to live in the Australian bush. Ten years later, when a child from his village is kidnapped and taken to Union City, he heads off in hot pursuit.

“Beyond aspires to be an emotional rollercoaster, and there are some moments that really deliver”

Beyond a Steel Sky has a relatively limited number of locations – perhaps 13 in the whole game – but its draw distance is sufficient that you get a real sense of the size of the city. A neat touch is that the most influential people live on the bottom of the city, with other residents aspiring to join them at the bottom. Even though you don’t get to explore every nook and alleyway, it’s an impressive sight.

Beyond aspires to be an emotional rollercoaster, and there are some moments that really deliver. The game’s grand revelation is a real bombshell; as is discovering the motives of the dead man you stole your system-busting ID chip from. But you wouldn’t know to look at Foster’s near deadpan expression, or the similarly emotionless NPCs. 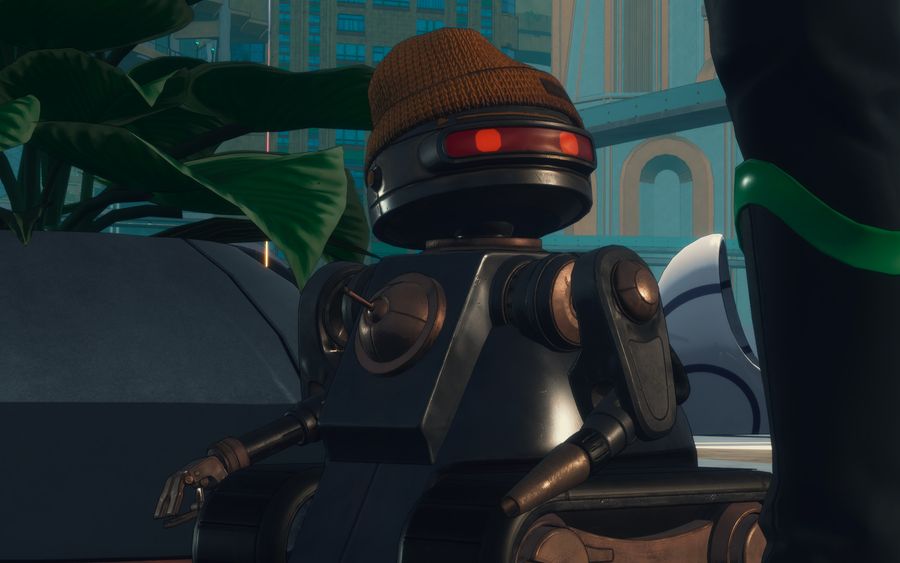 At one point you have to tell the man’s widow about his clandestine activities; Foster notes that her face softens, as she realises he wasn’t the bore she thought he was. Why? Because her face is incapable of conveying that emotion. The voice acting is sound, though you can easily spot actors playing multiple characters. That’s hardly a problem, but the fact that characters’ faces never match the emotions in their voices is often off-putting.

At least Foster is pretty handy at hacking, even if he does have a face like a botoxed mannequin. Instead of having you mess about completing mini-games, your hacking tool displays a flowchart for each hackable terminal, robot or machine you come across. Some of the elements in these flowcharts can be moved around or swapped with other machines, if you can stand somewhere where all the devices are in range. Trying to get a gate to open but don’t have the right access? Drag the “open gate” task to a nearby vending machine, ask it for a drink and the gate pops open.

The beauty of this isn’t that you use hacking to progress through the game, but that you can hack devices that serve no useful purpose. Stand between an educational kiosk and a security bot and you can drag the “aggressive” property from the robot’s speech module to the display’s speech module. Step back and the kiosk will carry on delivering the same educational information, but it’ll be yelling it rudely at patrons. Not all of the Beyond a Steel Sky‘s humour sticks but there are enough hits to raise a smile, especially if you snicker whenever anyone says the word “interface”. 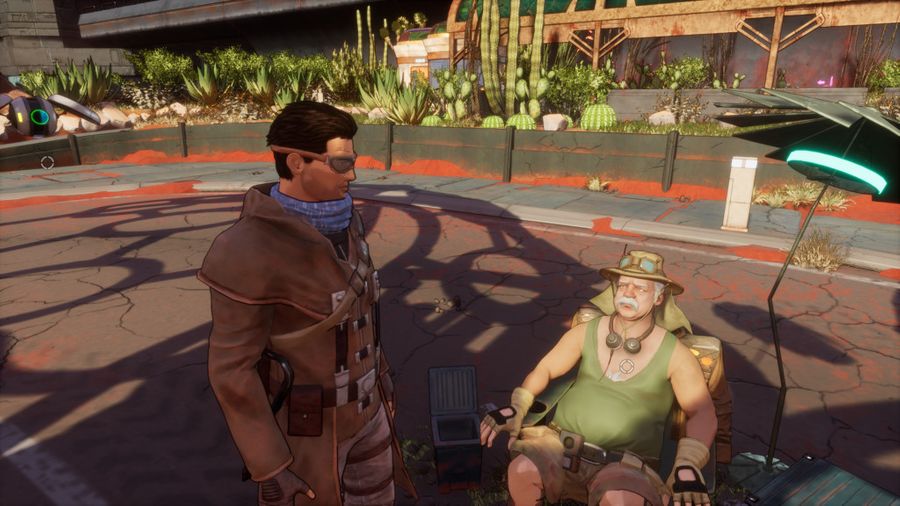 Beyond a Steel Sky‘s other puzzles are a bit of a mixed bag. Some are so perfectly pitched that you’ll kick yourself for not getting the answer sooner; and a couple are infuriatingly obtuse, such as the gas valve which can only be opened by dropping a massive metal anchor onto it. One task relies on you having a very specific piece of knowledge about how calculators and computers work. Without it, I was forced to resort to using the in-game hint system.

The endgame to all of this, which goes beyond rescuing an abducted child, is to uncover the rot at the heart of Union City. Maybe one of these days there’ll be an utopian society which isn’t fuelled by throwing puppies into industrial mincers. As promised, Beyond a Steel Sky explores what happens when you charge an artificial intelligence with running a city, which is a promising concept. Union City is a thoroughly believable world, a logical extension of like-hungry online culture; it’s not the first title to tackle this subject, but it does the basic concept justice.

“At a four hour runtime, Beyond tries to cram too many topics in, leaving plot threads unresolved”

Unfortunately, some of the related story beats are scattershot; at a four hour runtime, Beyond tries to cram too many topics in, leaving plot threads unresolved. There’s a moment when your actions inadvertently give everyone in the city the same economic and social standing; it’s a fascinating scenario that begs to be explored. However, the impact of your actions are barely referenced. Foster, in fact, gets off scot-free an awful lot. Coupled with his lack of visible emotion, it’s this that makes him appear arrogant.

Even when he is directly confronted by the consequences of his actions, he’s quick to deny responsibility, patronisingly detailing exactly how it wasn’t his fault. It doesn’t help that, while the other characters you encounter are reasonably rounded, the game’s primary antagonist is a moustache-twirling, one-dimensional stereotype. There are some strong characters in this game, but Foster ended up being the person I cared least about. 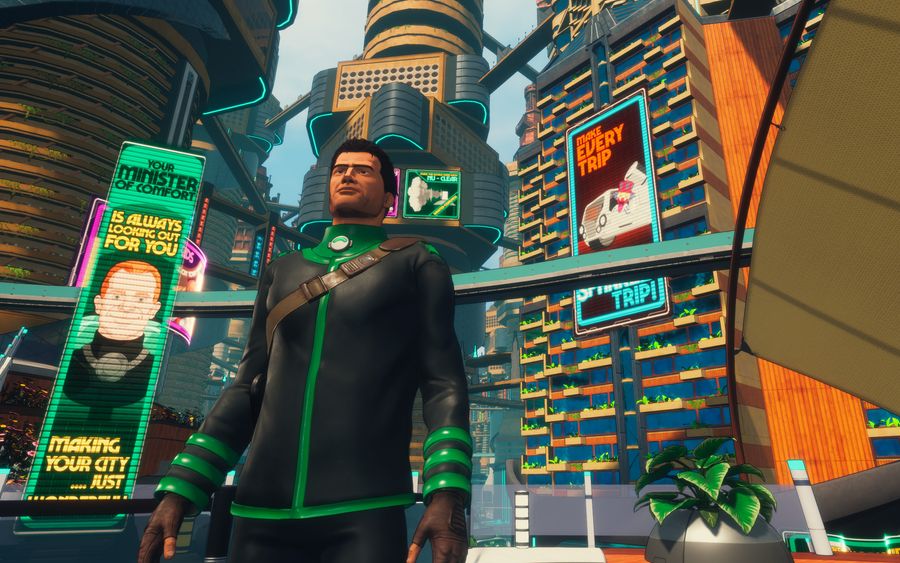 The dialogue system, too, is janky; so much so that it can take you out of the game. It doesn’t take into account that you’ve already told someone something; during the course of one conversation, I told the character someone was dead. He was, unsurprisingly, shocked (though you couldn’t tell to look at him). Choosing the next conversation option, Foster again brought up the same person’s death and the NPC acted as if he was hearing this information for the first time. Try showing an NPC an object and there’s every chance they’ll wander off while you’re fiddling with the interface.

“Beyond a Steel Sky still comes off as rushed and sometimes disjointed, with more than a few rough edges”

There’s still plenty to love; a lot of the gags, some of the better puzzles, and the return of a sarcastic, cynical old friend. Facial animation aside, Beyond a Steel Sky game looks gorgeous, with just enough of a comic book veneer to make it work, complimented by an excellent soundtrack. Watching your hacks pay off is always entertaining, not just because of the notion you’re fighting “the man” but because of the creativity you have employ. I’d happily play a spin-off where you were doing nothing but hacking; I was punching the air when one of my hacks saved a character from plummeting to their doom.

However, Beyond a Steel Sky still comes off as rushed and sometimes disjointed, with more than a few rough edges. Right up until the final ten minutes I could swear I was only halfway through the game. It’s still worth the trip if you’re a fan of the original, but Beyond a Steel Sky’s flawed journey doesn’t go far enough to truly recommend.

Beyond a Steel Sky is available on PC and Apple Arcade. We reviewed the PC version with a code provided by the publisher.