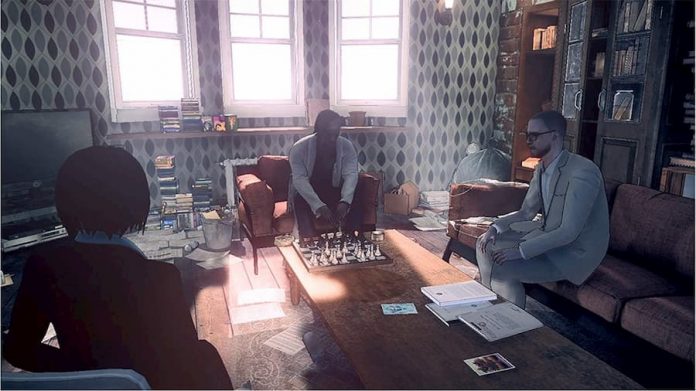 Anyone going into Deadly Premonition 2: A Blessing in Disguise should be well aware that there’s going to be some jank.

Actually, make that a lot of jank; there’s probably more jank than anyone could have ever imagined.

Serving as both a prequel and sequel to the original game, after a drawn-out opening Deadly Premonition 2 transports players back in time, reuniting them with FBI Special Agent Francis York Morgan once again. The year is 2005, and a vacation in the small town of Le Carré, New Orleans is about to be disrupted by a strange murder case. But FBI Special Agent Francis York Morgan doesn’t mind. In fact, hearing that the murder was ritualistic, he’s excited to get involved. And so begins another strange adventure, filled with twists, turns and shocking revelations.

“There’s probably more jank than anyone could have ever imagined”

After the snorefest of an intro, it takes a few hours or so for Deadly Premonition 2‘s story to grab you. Until then, you’ll possibly wonder if it was all a mistake; if the original game was just a “flash in the pan”. You see, Deadly Premonition 2 is very incompetent, technically. And in conjunction with the stop-start nature of the game getting you up to speed with many of its aspects until it opens up, it’s initially a chore to play.

Much of that has to do with the game’s time system. Just like the first game, Deadly Premonition 2 requires you to be at particular places or do certain tasks at specific hours of the day. That means you’ll need to waste a lot of time exploring the town of Le Carré, or pass time by smoking, camping or sleeping. Early in the game, however, there’s not really much for you to do in Le Carré – or at least you won’t know what’s available for you to do. And besides, you won’t really want to explore, because performance out in Le Carré’s open world is abysmal. 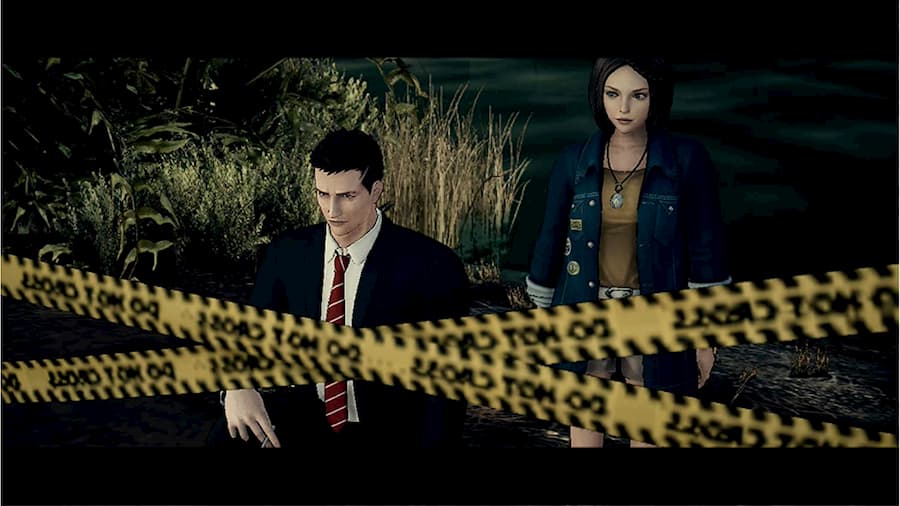 “Getting from one place to another a tedious and almost torturous task, nearly rendering the game unplayable”

I’ve never played a game that performs as badly as Deadly Premonition 2 when out in its open world area. It’s constantly sub 20fps, and to make matters worse, the game also occasionally freezes for a second or more. The draw distance for NPCs and certain other elements is also terrible. It makes getting from one place to another a tedious and almost torturous task, nearly rendering the game unplayable. Thankfully Le Carré isn’t as big as Deadly Premonition‘s Greenvale, though with your only method of travel being a skateboard, it still takes a while to get from one place to another.

Your journeys are often not long enough for York to finish one of his monologues, though. He covers wide range of topics, including films, yet many of them are repeated time and time again because they get cut off by your actions before they can finish. And as if listening to the same bit of dialogue numerous times isn’t irritating enough, you’ve also got a dreadful sound mix to contend with. Unless you fiddle with the audio settings, the sound of the skateboard will make it hard for you to hear anything. 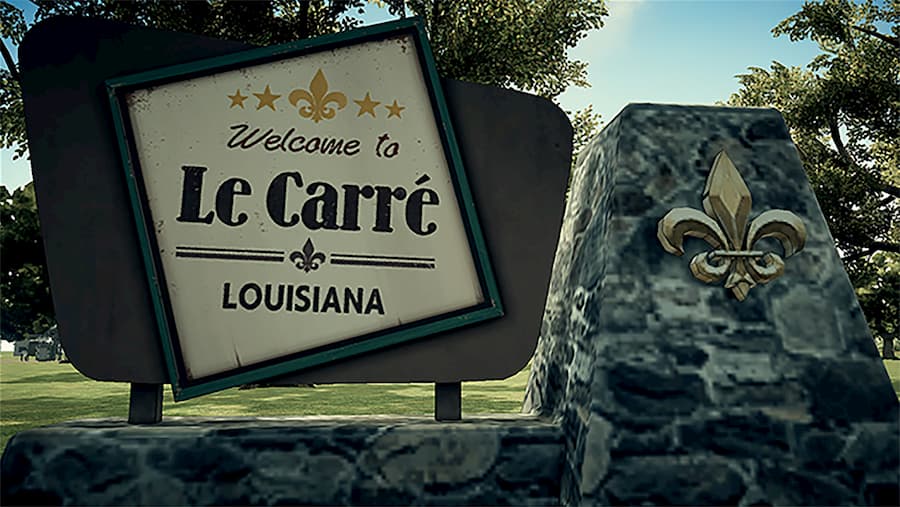 “It’s a shame that Deadly Premonition 2 is mired with such terrible technical issues, because underneath there is an entertaining experience to be found”

And then there are the load times. They’re loathsome. They’re not so bad if you’re going between areas in an indoor location, but traverse from indoors to outdoors or vice versa, and you might as well reach for your phone to keep you entertained for a minute or so. There are times where the screen will just go black for long periods of time, too, leaving you wondering if the game has crashed.

It’s a shame that Deadly Premonition 2 is mired with such terrible technical issues, because underneath there is an entertaining experience to be found. FBI Special Agent Francis York Morgan is as weird yet likeable as ever, and the supporting cast is also enjoyably zany. Combat has also been streamlined and improved. York can now quickly lash out with his fists when enemies get too close or when he wants to break a box, and can dodge enemy attacks. When drawn into the ‘Otherworld’, his arm becomes one with his gun, too, allowing him to lock onto enemies with powerful homing bullets. It’s just a shame that enemy variety is lacking. 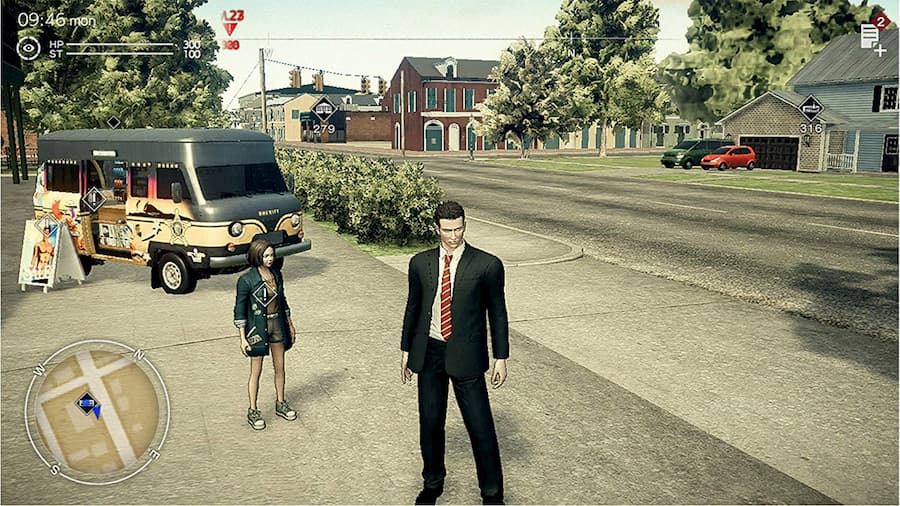 “Try as you might, it’s hard to thoroughly enjoy something that’s such a technical mess”

Fans of the original Deadly Premonition who have a lot of patience will find plenty to like about Deadly Premonition 2; there’s no doubt about that. They’ll eat up every bit of its crazy story, and spend many more hours engaging in its activities and side quests, as pointless as they might be. Its technical issues, which can be somewhat lessened by playing in handheld mode, will simply suck too much of the fun out of the experience for many, however. As well as the pacing problems that frequently rear their head.

Ultimately, Deadly Premonition 2: A Blessing in Disguise just isn’t acceptable in this day and age. There’s simply no reason why a game should perform this badly. Try as you might, it’s hard to thoroughly enjoy something that’s such a technical mess. If you’re a glutton for punishment and want to spend more time with the most bizarre protagonist in video games, go right ahead. But don’t say that you haven’t been warned. It isn’t a blessing, it’s a disappointment.

Deadly Premonition 2: A Blessing in Disguise is available on Switch. We reviewed the game with a code supplied by the publisher.

Buy Deadly Premonition 2: A Blessing in Disguise on Amazon 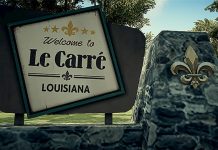 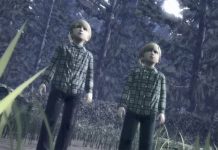