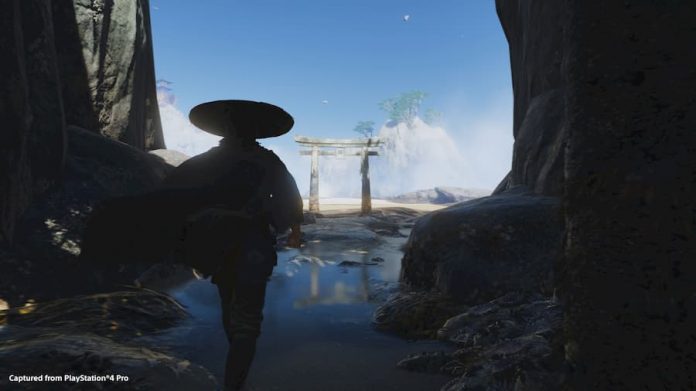 Ghost of Tsushima has finally emerged from the shadows.

The latest open-world game from Sucker Punch Productions, Ghost of Tsushima tells the story of samurai Jin Sakai, who finds himself torn between maintaining his honour and ending the life of Khotun Kahn, leader of the Mongols who have invaded his homeland, by any means necessary. You see, Khotun Khan has studied the samurai, he knows their tactics and rules. And so to defeat him, Jin must become more. He must become the Ghost of Tsushima.

It’s a fairly standard premise – a hero fighting for freedom and his people – but one made all the more interesting by the setting. We don’t get all that many games focused on samurai, let alone 13th century Japan, and Sucker Punch has beaten Ubisoft to the punch; fans have been begging them to take the Assassin’s Creed series there for years. And so a predictable yet entertaining story is propped up by breathtaking scenery. That same scenery also acts as a crutch for Ghost of Tsushima‘s by the book open-world gameplay, along with a combat system that eventually develops into something very enjoyable indeed.

Many will be glad to hear that there’s no gate-keeping in Ghost of Tsushima‘s story. You can head right through its story missions one after the other if you wish; it might just prove to be a tiny bit harder if you do so. There’s another, more problematic, caveat to rushing through Ghost of Tsushima‘s main missions, though; you won’t build up much knowledge of, or affinity for, your friends that often fight alongside you. Jin Sakai inspires many to take up arms against the Mongols, and a small number of them also have their own matters to deal with. Only by helping them in side missions will you learn more about these brave warriors, and perhaps grow to like them. Don’t do their side missions, and some of the gravitas of Ghost of Tsushima‘s main story is lost.

More side missions are available in addition to those concerning your friends, of course. You might find civilians needing help when out exploring, or hear interesting tales of other samurai that survived the massacre witnessed at the start of the game. Some of them prove to be worthwhile diversions, combining tracking, exploration and combat, but many devolve into your typical open-world fodder; go to a location, kill all mongols, then return. You are rewarded for your efforts, however. A boost to your legend helps you along the path to master your techniques and acquire new ones, while materials always come in useful when upgrading your arsenal. 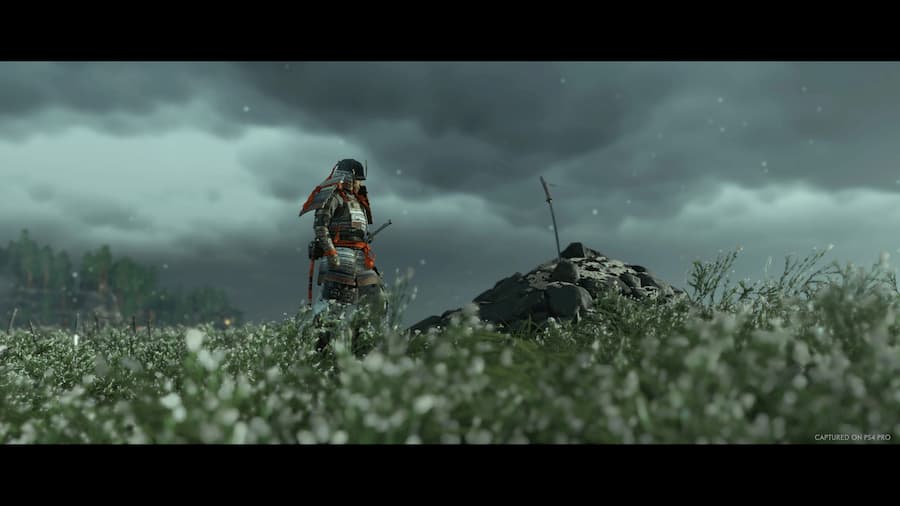 The best side missions in Ghost of Tsushima are designated as Mythic Tales. These are meatier side stories that offer valuable rewards such as new equipment or flashy special moves. Many of them are just as entertaining as main missions, with a self-contained story that often ends with a tense, cinematic duel. Some are your standard to-ing and fro-ing from one farmstead or other occupied area to another in order to eradicate Mongols and collect things, however.

The remainder of Ghost of Tsushima‘s points of interest are more laid-back in nature. Resting at a Hot Spring, for example, gives you a brief glimpse of Jin’s exposed buttocks, as well as a minor boost to your maximum health, while completing bamboo cutting mini games increases your resolve. You can also follow foxes from their dens to Inari shrines; honouring them will unlock more charm slots and ultimately charms themselves. And then there are Pillars of Honour to discover, and haiku poems to compose at picturesque spots; both of those will reward you with cosmetics.

Shinto shrines are the best of the bunch, though. Located atop rocky outcrops, the bridges to them have all been broken. So, reaching their peak generally requires ample use of your grappling hook, as well as a keen eye for climbable rocks. It’s your typical Sony-style environmental traversal, as found in games such as Uncharted, but it makes for a nice change of pace. Reach the top and you’re rewarded with a useful charm, and you might also find some valuable resources. 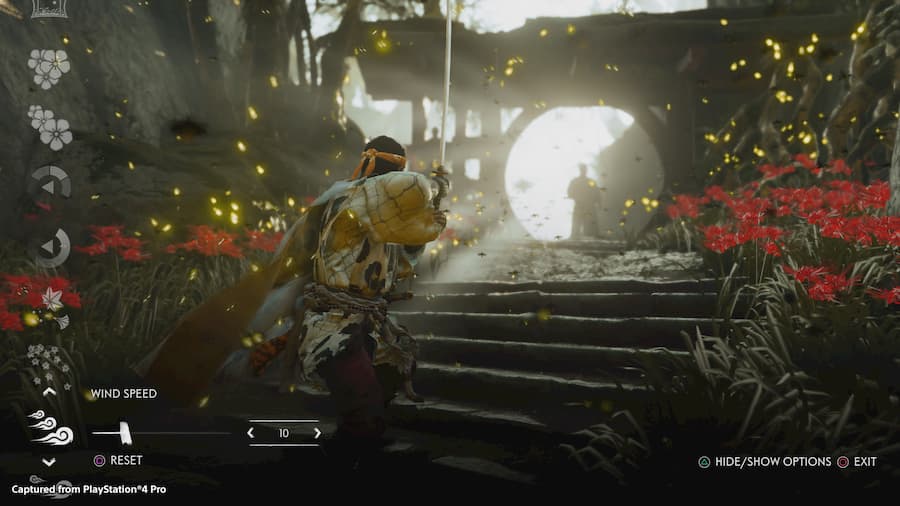 If you want to make Jin as powerful as he can be in Ghost of Tsushima, resources are essential. Various metals are used to upgrade your katana and tanto; woods to upgrade your bows; and fabrics upgrade pieces of armour. You’ll also need plenty of supplies, too, which is Ghost of Tsushima‘s currency. Predator hides, meanwhile, can be exchanged for bigger pouches and quivers, expanding your ranged options. And flowers can be used to purchase new skins for your swords and amour, as well as buy new headgear. It’s easy to build up a wealth of cosmetic options for Jin, allowing you to explore Tsushima in style.

When it comes to armour, however, its effects are more than cosmetic. Each piece of body armour available to you in Ghost of Tsushima offers three perks that can enhance or define your playstyle, and they can be enhanced further by upgrading. Samurai armour, for example, is great when facing enemies head-on, as it boosts your health and reduces damage taken. But when trying to be stealthy, its bulkiness does nothing for you. You’re going to want to equip something lighter – that increases the time it takes for enemies to detect you – when going on a sneaking mission. Anything you can equip to your face or head is free of effects, so you can mix and match to your heart’s content.

It’s how you distribute your technique points, earned by increasing your legend and completing certain missions, that mainly affects how you play Ghost of Tsushima. At least in its early hours, anyway. If you want to play like a samurai and face your enemies head-on, you can pump points into that specific tree, enhancing your parrying abilities and more. As new stances are opened up by observing and killing Mongol leaders, you can put points into those, too, making them more effective. If you’d rather play more like a ninja, you’ll prioritise putting points into the ghost skill tree, boosting the effectiveness of your tools and ranged weapons such as the bow and arrow. Whichever style you choose though, by the time you’ve reached the end of the game’s story, there’s a good chance you’ll be competent at both stealth and all-out war. 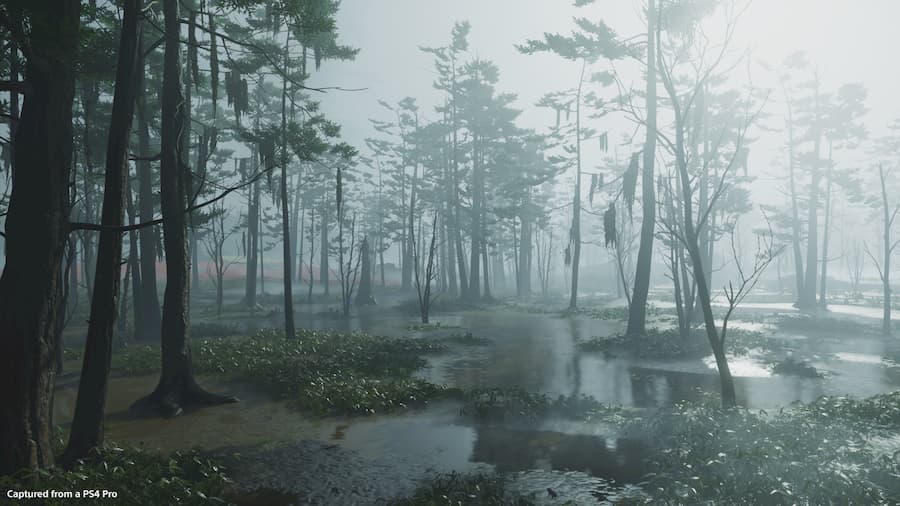 Combat eventually becomes the highlight of Ghost of Tsushima, but it takes a while to get there. At the start of the game, when your moveset is limited, the volume of encounters can get rather tiring due to your lack of combat options. The absence of a manual lock-on feature is also something to get your head around. Once you’ve expanded your range of abilities and upgraded your weapons so that enemies go down quicker, however, battles become much more varied and exciting. Button bashing is not recommended; Ghost of Tsushima is a game in which you generally have to play defensively, parrying enemy attacks to create openings. You can use the stances available to you to stagger enemies if you do wish to go on the offensive though, and tools such as kunai and smoke bombs are useful for making enemies vulnerable.

In many cases though, it’s wise to thin out enemy numbers before beginning an all-out assault. Instigating a standoff is one way to do that, rewarding expert timing with instant kills. And of course, utilising stealth is another. Ghost of Tsushima‘s stealth mechanics aren’t anything out of the ordinary, but they get the job done. You’ll rue the fact that you can’t hide bodies, for example, but your enemies are rather stupid so it doesn’t really matter all that much. Unless they actually see you out in the open, they won’t care too much that their friend has had their throat cut. Some forced stealth sections, in which the alarm being raised results in instant failure, can prove to be irritating though. 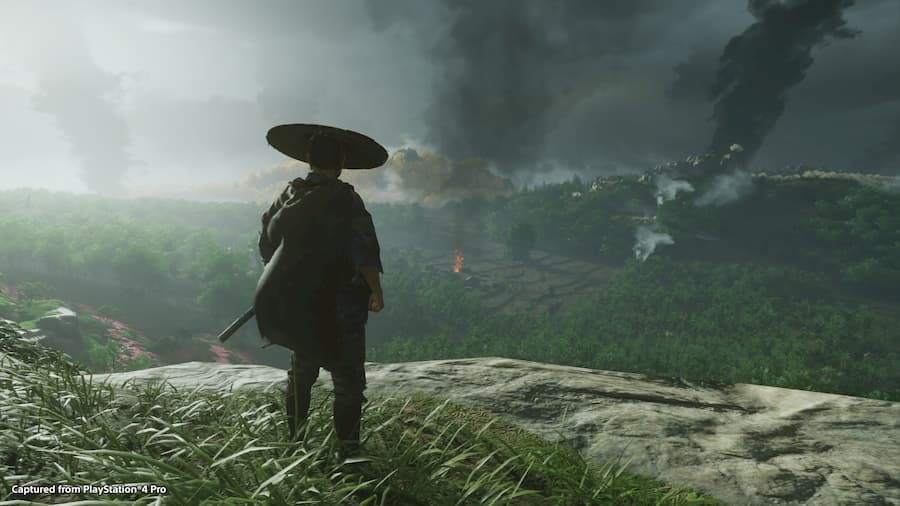 Duels are by far the best thing about Ghost of Tsushima; dramatic one-on-one battles in which your sword fighting skills are truly put to the test. You’ll need to study your opponent carefully, learn to avoid any attack that flashes red, and parry like a pro if you wish to survive. Ghost of Tsushima‘s Resolve system does offer you a crutch, though: with just a push of a button Jin can restore a portion of his health providing he has at least one stock of resolve. It can also be used to pull off powerful mythic skills, or even revive Jin should he fall in battle. Once depleted, resolve can only be gained by killing enemies or skilfully parrying their attacks.

Unfortunately, if you were intrigued by Ghost of Tsushima’s Kurosawa mode, you might be left a bit disappointed. It’s no doubt a draw for those with a fondness for classic samurai movies, but doesn’t play to the game’s strengths. The beautiful visuals become neutered, and the drop in audio quality is authentic but lessens the experience. It makes the game harder to play, too. Attacks that flash red, indicating that they can’t be blocked or parried, become indiscernible from those that flash blue, that can be parried. It essentially requires next level mastery of the game, so is more suitable for a second playthrough. You can handily toggle Kurosawa mode on and off in the game’s options, however. 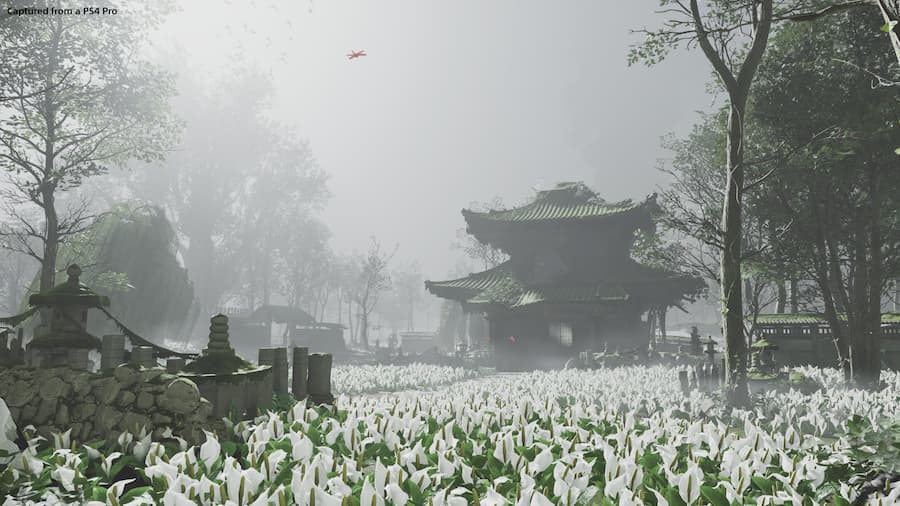 Ghost of Tsushima is a great open-world game, of that there is no doubt, but it lacks the wow factor. Its biggest asset is its environment; a beautiful, colourful world that is often breathtaking to behold. It’s not always so beautiful, though, and can often feel lifeless as you travel by foot or horse. And then there’s the combat, which is undoubtedly fun once you’ve unlocked your full arsenal, but does eventually begin to feel repetitive. The result is an uneven experience that’s always entertaining but rarely has you on the edge of your seat, and Jin’s reserved nature doesn’t help; like Connor in Assassin’s Creed 3, it’s hard to warm to him.

Had Ghost of Tsushima released earlier into the PS4’s life, chances are it would be revered. But now, in a world in which the likes of Red Red Redemption 2 and Assassin’s Creed Odyssey exist, it feels a little underwhelming. Still, it is quite possibly the best samurai game ever made, and is well worth picking up if you’re after another epic open-world to get lost in. Just temper your expectations as much as your steel.

Ghost of Tsushima is available on PS4. A code was provided by the game’s publisher to facilitate this review.

Buy Ghost of Tsushima on Amazon