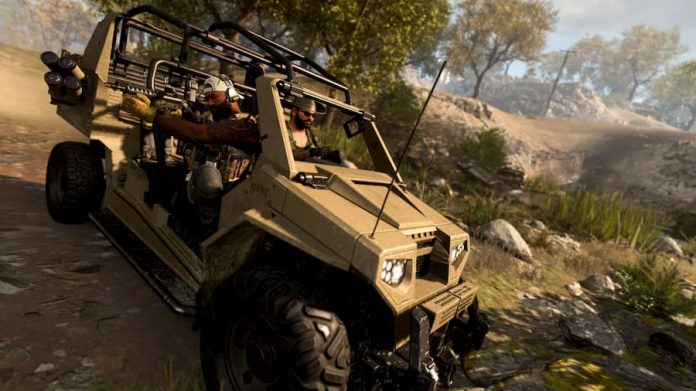 Call of Duty: Warzone has a surprising profusion of vehicles that players can utilise.

However, most top-level players either won’t use vehicles in Warzone or only use them very sparingly. They are seen as a poisoned chalice, and there is good reason for this. One lucky heavy-weapons shot or C4 toss is enough to blow a vehicle to smithereens and take you, and your entire squad, with it. There’s nothing more embarrassing or frustrating than finally managing to acquire a loadout, fully kitting up your team, only to hop in a helicopter and be shot out of the air instantly, ending the game for all four of you.

But vehicles, in the right hands, can be a game-changer, so we’re here to show you how to get the best out of vehicles, and hopefully stay alive in the process.

Always use a Trophy System

Firstly, before getting in a vehicle, whether it’s an airborne helicopter, a Cargo Truck, an ATV, or a Tactical Rover, always try and protect it by deploying a Trophy System on it. Trophy Systems look like camera tripods, and are very common in Verdansk. They take up a tactical equipment slot and can be activated by holding both grenade buttons.

When you deploy your Trophy System, it will set up on the ground in front of you. This little device will neutralise all incoming explosive fire, such as RPG rockets, missiles, and even grenades. You cannot pick it up once it is deployed, so you only have one shot.

If you stand next to a vehicle, you can try and deploy the Trophy System in the vehicle itself. It’s not an integrated part of the game, however – it’s sort of a hack. There’s a chance your Trophy System may overshoot the vehicle or even bounce off it, but we find nine times out of ten, it will stick. Once you have successfully deployed it, your vehicle will be significantly more resilient.

Be warned, however, that the Trophy System does not make you invulnerable. Gunfire and C4 will still damage a vehicle as normal. In addition, some players have mastered the trick of firing their RPGs at the ground in front of the vehicle, which the Trophy System cannot neutralise. This won’t cause as significant damage, but it is likely to halt your vehicle at the very least.

It’s always better to have a Trophy System than no protection at all!

Pick a destination before you go

It’s wise to choose your intended destination before you set out and mark it on your tactical map. If you drive around without knowing where you’re going – or worse, look at your map as you go – you’re very likely to stumble into an ambush and get killed. This may seem like common sense, but you would be surprised how many new players do it!

Disembark before you reach your destination

It is inadvisable in most instances to drive right up to your intended destination, unless there is some outstanding reason for doing so. It is better to disembark a few hundred metres from your objective and cover the remaining distance on foot. Why? The reason for this is two-fold.

Firstly, vehicles always appear on the tactical map due to their noise, so enemies are likely to know exactly where you are while in a vehicle. It’s one of the things that makes them so dangerous to use. However, if you disembark a little way from your destination, and cover the remaining ground on foot, you will create some ambiguity as to your exact location.

Secondly, if there are enemies camped out in the building, structure, or vantage point you’re approaching, you will give them less of an opportunity to ambush you. It also gives you the option for a retreat if the zone proves too hot.

One exception to this rule might be if you are landing on the roof of a tall building with the helicopter. In this instance, it would probably be best to land on the roof. Otherwise you will have to leave your helicopter on the ground, giving your opponents an opportunity to steal it from you. Roof-hopping in a helicopter, one step ahead of the gas, can be an excellent way to get into the end-zone, provided the terrain is right and you are able to avoid heavy-weapon fire.

Know when to bail

If your spidey-senses are tingling, jump out. Seriously. It’s better to have the embarrassment of your friends having to turn the Cargo Truck around and pick you up again than having your entire team wiped out by an RPG hit.

On that note: helicopters have built-in missile-warning systems, which give you a helpful alert of when an explosive is incoming. Always jump when this warning appears. Though helicopters do have flares, which in theory can neutralise missiles, they are only effective half of the time. It’s much safer to avoid taking the risk and bail. You can make a parachute landing on a structure below you, get into cover, and start engaging the enemy on more equal footing.

Last but not least, vehicles are melee weapons

Don’t forget, that in desperate circumstances, vehicles are lethal weapons. If you run someone over, it’s a free one-hit-kill. Of course, it’s not recommended to try and actively run over a whole team; they’ll likely shoot you into oblivion before you get them all. But if it’s a case of escaping a dire situation, don’t be afraid to put pedal to metal and run the enemy down!

There’s no doubt that using vehicles in Call of Duty: Warzone is risky, but they are there for a reason. A team that can use vehicles well will have greater flexibility and mobility than teams that don’t. Why not try using them in your next game and see how far you get?