Everyone’s had sex fantasies with monsters, right? No? Just me, then? Well, this is awkward.

Whether or not you have, it’s always fun to play make-believe. The real world might not have vampires or werewolves, but if Twilight is anything to go off, people really have the hots for them. Monster Prom from developer Beautiful Glitch takes those secret fantasies and makes them a reality. Better still, it gives you the chance to embrace your kinkiest kinks with your friends sitting right next to you. A multiplayer dating sim now available on Switch with all of its additional content included, Monster Prom XXL wants you to embrace your bad side and give in to that devil on your shoulder.

In Monster Prom XXL, you play as one of four monsters who attends Spooky High. Despite being in high school they’re all twenty-somethings, making it much more appropriate to discuss drugs, alcohol, sex and murder with them. Your character is desperate to find a date to monster prom, and your only options are the eight eligible bachelors and bachelorettes that go to school with you (along with a couple of others included in the game’s secret endings).

Romanceable characters include: Zoe the Eldritch Horror, who enjoys Kpop, ‘shipping people without their consent and being a part of a billion fandoms; Scott the Werewolf, who is a bit dumb but has a heart of gold; and Vera the Gorgon, whose wallet is much bigger than her heart. By visiting different locations at the school, you’ll get to decide which monster character is the one you want to go to prom with. It will then be your goal to get them to say yes – but it’s a lot trickier than it seems.

At the start of the game, you’ll take a short quiz which will give your character their base stats. Each romanceable character in the game has a particular stat that they’re impressed by. Damien the demon, for example, finds someone bold and willing to light things on fire to be right up his alley; while Polly the Poltergeist wants someone fun. In order to get them to go to prom with you, you’ll need to have high enough stats. You’ll also have to impress them anytime to you run into them during the game’s events. What’s unique about Monster Prom XXL is that the choices you make aren’t what you’ll find in your average dating simulator. You aren’t going to be leaving a cute note in anyone’s locker. No, you’ll be deciding whether or not vending machines have feelings, or figuring out how to start a bitchin’ food fight in the cafeteria. Make the right choice and you’ll be a step closer to romancing the monster of your dreams. Step wrong, however, and you’ll lose stat points, and with them, your chances of going to prom will dwindle.

Possibly the most interesting aspect of Monster Prom XXL is that it’s multiplayer. You can sit down on the couch, floor, or on the back of a sexy muscly dragon, with up to three friends and battle it out to see who gets to take their date to prom. Each player takes control of a different character and gets their own set of stats. They also get their own events and their own money to spend on items. Monster Prom XXL is a lot of fun, but you can’t shake the feeling that sometimes, it’s really working against you. You can pick the obvious choices that will surely impress your crush – but sometimes the most obvious answer isn’t the right one. These monsters don’t think like you’d expect them to. It’s up to you to try and get into the twisted heads of the characters and, rather than picking your favourite answer, pick the most gruesome, or the most funny or the most outlandishly ridiculous. That might just be the exact answer you need in order to impress Miranda the merprincess, or Calculester, the library computer-turned-AI robot. “If you’re looking for some crude, ridiculous fun then look no further”

Even when you think you know exactly what Monster Prom XXL is all about, it will keep surprising you. With over 1,000 events to play through and tonnes of endings to get, it feels new even after playing it through a dozen times. And you will want to keep playing; failing to get a date over and over again only encourages you to try again with a different approach. Being rejected has never been so fun!

Monster Prom was already one of the best dating simulators out there. And since this XXL version includes the Second Term DLC, which features bonus characters and tonnes of extra events, it’s better than ever. If you’re looking for some crude, ridiculous fun then look no further. While Monster Prom XXL might feel like it’s working against you sometimes, getting rejected and having to try again is just part of the fun.

Monster Prom XXL is available on Switch. We reviewed the game with a code provided by the publisher. 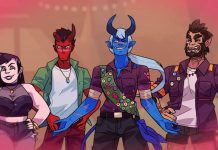 After 4 Years, Move or Die is Still an Awesome Party Game