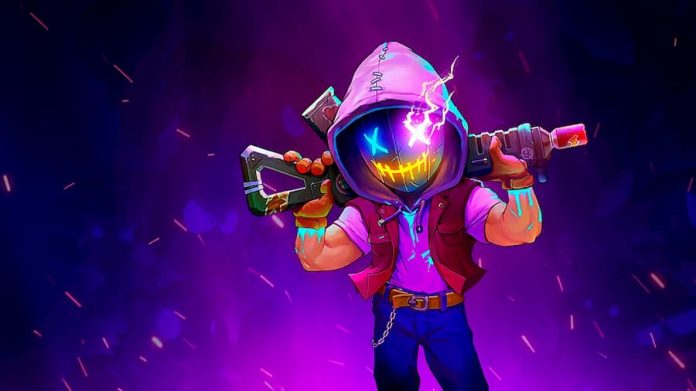 Rather watch than read? See the video version of our Neon Abyss review here.

Are you ready to enter the Neon Abyss?

Probably not. In fact, definitely not. The first time anyone enters the Neon Abyss, nobody is ready. That’s the way it goes. This Rogue-like action-packed platformer from Veewo Games and Team17 pulls no punches. It’s out to get you. And only through practice and perseverance will you learn to best its ever-changing dungeons. And a bit of dumb luck doesn’t go amiss, either.

“Death is the only way out”, Neon Abyss informs you, as you first jump into the titular abyss. You’re not sure what awaits you; but equipped with nothing but an under-powered gun and your own grit and determination, you’re about to find out. You’ll make your way through numerous levels, each made up of a labyrinth of rooms. At the end of each level, you’ll face a boss, and defeating them will allow you to move onto the next level.

Rooms contain a slew of enemies or treasure; sometimes both. You’ll need to clear all enemies before moving onto the next one. Neon Abyss is very much like a side-scrolling The Binding of Isaac, even down to the myriad of weird and wonderful perks you can collect along the way. All that’s missing is the dark undertones of dead babies; instead replaced with colourful eggs, helpful clowns and teddy bears that want to kill you. It’s bonkers, and it’s brilliant.

Like the best Rogue-like games, Neon Abyss plays its cards close to its chest. It’s only after you’ve sunk numerous hours into the game does it start to open up. Every time you defeat a boss, you’re rewarded with a gem. These are the only persistent item in the game, allowing you to unlock permanent upgrades. Rather than powering up a character or weapon, though, upgrades come in the form of new items that will start to appear in the game or, more interestingly, new rooms types or features that you can stumble on. For instance, the first room you’re able to unlock is a piano-playing minigame; providing you have enough coins to activate it, you’ll be challenged with jumping on a sequence of notes. If you succeed, you’ll be rewarded with a power-up. 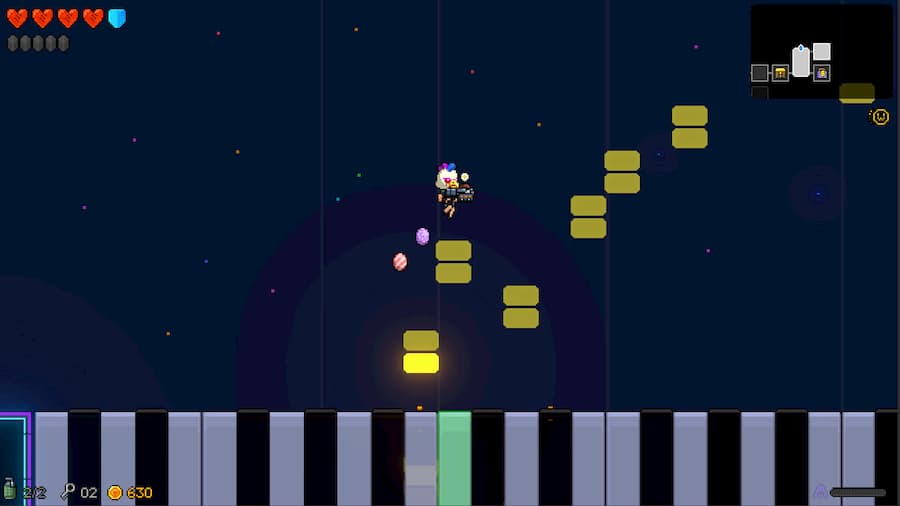 “There are hundreds of pick-ups available in Neon Abyss, and they all work together; either in harmony – or in complete disaster”

You can also unlock new characters with the gems that you collect, but these are mostly disappointing. Each unlockable character has their own unique skill, but few of them feel truly helpful. The two base characters – one who starts with a bomb in his inventory and another who has an extra heart – feel more useful to your adventure.

The upgrades and perks you acquire as you play through Neon Abyss are the true stars of the show. Yes, you may start out with a sub-par weapon, but it won’t last long. The longer you survive the abyss, the more bat-shit crazy and wonderful your loadout becomes. Perhaps you’ll massively increase the power of your gun; or perhaps you’ll find a new gun that shoots lasers. Or stars. Or maybe it won’t be a gun at all; maybe you’ll wield a guitar that fires music notes. Then maybe you’ll also gather pick-ups that allow you to double jump, or something that increases your rate of fire depending on how many coins you have. Or maybe your bullets will become bouncy, or explosive. Or they’ll pass through walls, or split into two. Or you’ll simply fire five of them at once. Or, maybe, all of the above. 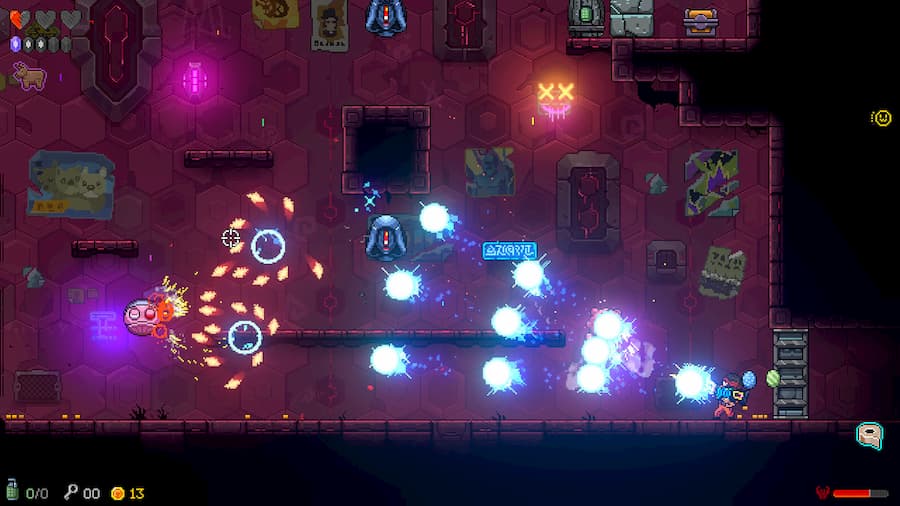 There are hundreds of pick-ups available in Neon Abyss, and they all work together; either in harmony – or in complete disaster. All pick-ups can be positive, or they can put you at a serious detriment. Take exploding bullets for example; they’re great for blowing through rocks or causing serious damage to enemies. But they also damage you. When you just fire one bullet at a time, it’s manageable. But if you fire several, all that ricochet off the environment or circle around you, it’s a recipe for disaster. You’ll be saying goodbye to your run faster than you can say “oh shit!”.

And that’s not all; along with your crazy array of weapons and perks, you’ll also collect eggs as you make your way through Neon Abyss. Eggs hatch after a time; sometimes they’re empty, but sometimes they’ll grant you a pet. Pets aren’t invincible, but they come in numerous shapes and sizes, all offering their ‘help’ to you in some way or another. Most are there to aid you; they’ll block incoming bullets, or fire their own ammunition at your foes. But some can prove to be little pests, such as Peter the cat, who collects health pick-ups and turns them mouldy. Once again, pets can work in tandem with each other. Maybe you’ll only have one or two, or maybe you’ll have an army of two dozen little creatures following you as you go. 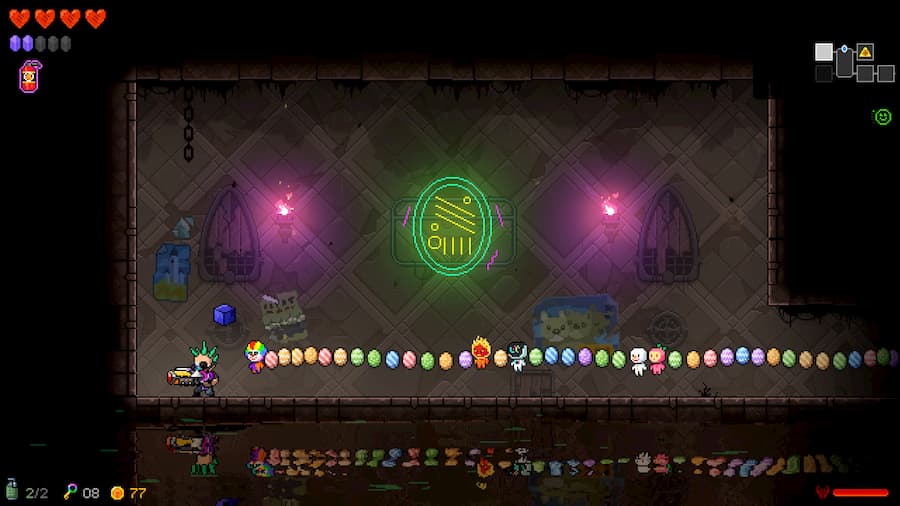 It means that Neon Abyss‘ greatest pleasure – the sheer absurdity and insanity of it – can also be its biggest downfall. Sometimes it’s just too hectic to have any idea what’s going on. You might be firing numerous bullets at a time, and you may have a dozen pets all firing their own bullets. The screen becomes a mess of death, and there’s absolutely no way to tell friendly bullets from enemy bullets. At the same time, in these situations, you can also end up feeling too overpowered; get the right selection of pick-ups and you can destroy anything in a room in seconds. But that’s the joy of the random nature of the game; you’ll die quickly five times in a row before making it to the end of the dungeon, feeling like an unstoppable badass. It feels like a reward, and you’ve earned it.

Progressing through Neon Abyss and successfully completing its levels will unlock more ‘managers’, as they’re called, for you to defeat. These guys are much more lethal than the game’s regular bosses, putting up a mean challenge that you need to be ready for. As each new manager unlocks, the amount of levels you need to complete to reach them increases. All the enemies are joyously designed here – even the armoured bastards that block your damage until they’re practically touching you – but the bosses are truly something else. Even though you’ll end up facing them countless times, they never get boring, with their attack patterns remaining random and unpredictable. They’re zany and superbly animated; even when you’re getting your ass kicked, it’s hard not to have a smile on your face.

However. Not all in Neon Abyss is so perfect. There are a few irksome bugs present that require a restart to fix. A couple of times, our weapon randomly stopped firing, requiring us to leave our current run. Another time, walking into a new room presented a black screen; the audio was still playing, and we seemingly still had control of our character (as noted by the sound of gunshots as we pressed the fire button), but the image didn’t come back until we quit the game. They haven’t happened often enough to be a major problem – and could be down to a particular combination of items that the game’s code doesn’t quite like – but it’s an issue still worth mentioning. Having to quit on a particularly successful run because your gun has suddenly stopped working is less than ideal – but these issues haven’t put us off jumping straight back in.

With beautiful pixel art brought to life with bright neon colours and wonderfully absurd enemy designs, Neon Abyss is an absolute joy to play. Its bombastic soundtrack spurs you on through each dungeon and if you die – no, when you die – you’ll just shake it off, eager to jump back in. The sheer wealth of weapons and pick-ups available genuinely means that no two journeys through the abyss ever feel the same. The room layouts may look the same, but the chaos that happens within is completely different each time. Neon Abyss is undoubtedly one of the best Rogue-likes in recent years; gorgeous, meticulously designed and a hell of a lot of fun to play. It’s a shame a few bugs let it down, but hopefully they’ll be ironed out before long, then what’s left will be nothing but an exhilarating experience.

Neon Abyss is available on PC, PS4, Xbox One and Nintendo Switch. We reviewed the game on Xbox One X with a code provided by the publisher.