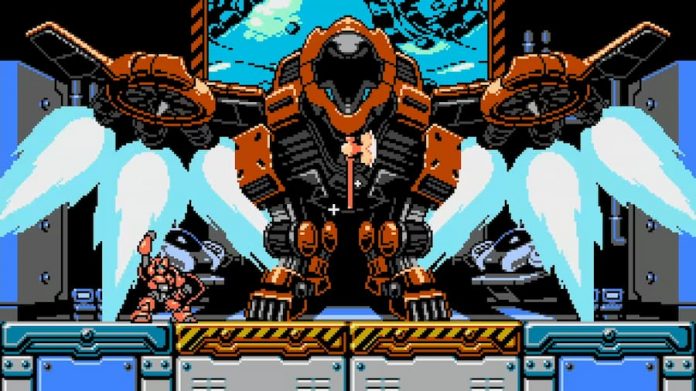 Do you ever feel nostalgic for your childhood?

Those days when you’d rush home from school, or wake up on a Saturday morning, to turn on the TV and watch some of your favourite superhero shows? Action platformer Panzer Paladin from Tribute Games does a wonderful job of invoking those feelings with its throwback mechanics and Game Boy Color-like aesthetics.

Panzer Paladin follows a young android girl named Flame and her Paladin power armour called Grit. The plot itself is easy to understand. Demonic weapons have fallen from the depths of space and it’s up to Flame and Grit to travel all over the world to defeat Weapon Keepers. It’s all rather straightforward with very clearly defined lines between good and evil, keeping in spirit with cartoons and TV shows back in the 1990s and early 2000s.

“If taking a trip back in time with an old-fashioned platforming game sounds like a good time to you, Panzer Paladin won’t disappoint”

The game’s weapon mechanics are the core of its gameplay. Each weapon has its own range, durability, and spells. These spells can range from giving stat boosts, healing, and enhancing attacks. However: the player must completely break the weapon in order to activate the spells, so the mechanic provides an interesting risk/reward system. You might want to keep a certain weapon because it can safely damage enemies at a distance, but on the other hand, its spell fully heals you. Using weapons strategically can mean the difference between beating a boss or wiping out.

They’re also needed to mark checkpoints. Perhaps you have a weapon that’s low on durability and the spell it holds isn’t useful to you at the moment. You can sacrifice it at the checkmark point. Any excess weapons are stored in your inventory, and can be swapped at any time during the level between the four weapons slots you have. You can also get rid of weapons at the Laboratory for experience to upgrade Grit. 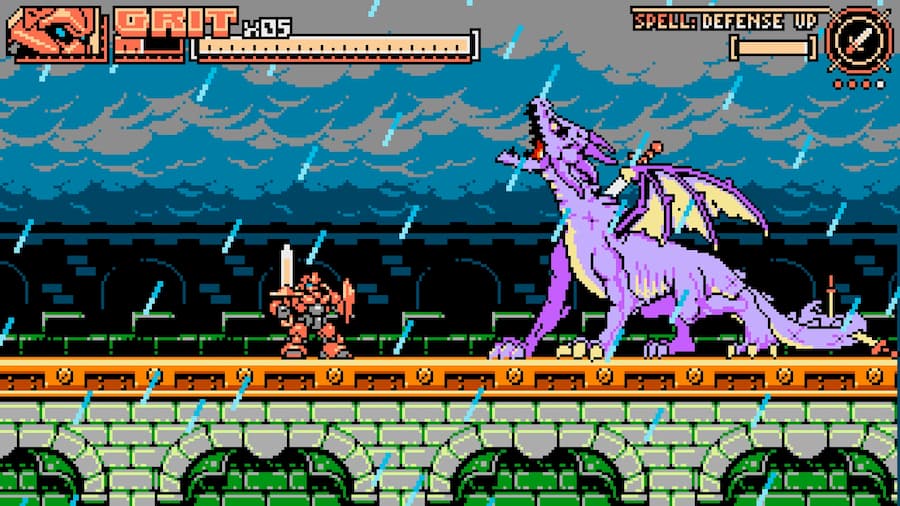 Weapons can be found throughout levels in Panzer Paladin. They either drop from enemies, or can be discovered in hidden areas. The game provides ample amounts, so you’re always encouraged to keep using them for whatever reason instead of just hoarding them.

In terms of its platforming, Panzer Paladin is rather straightforward: destroy enemies in your path and reach the boss, the Weapon Keeper, at the end. Sometimes you’ll have to eject from Grit and proceed as Flame to access small areas, or use her laser whip to swing across large gaps. There are also some hidden areas only accessible with Flame that can contain secret items.

But although Panzer Paladin‘s simple retro style adds a certain charm, there are instances where its old-school design can seem a bit too archaic at times. Like many platforming games of its type, Panzer Paladin employs a lives system. Running out of lives means starting the whole level over, which can quickly become frustrating on higher difficulty levels. Any weapons you’ve used up against a boss stay gone once you exhaust a life, and you’ll respawn at the checkpoint. So if you don’t beat the boss the first time around, you’re already at a slight disadvantage because you have fewer weapons – especially if those weapons were ones that could heal you. 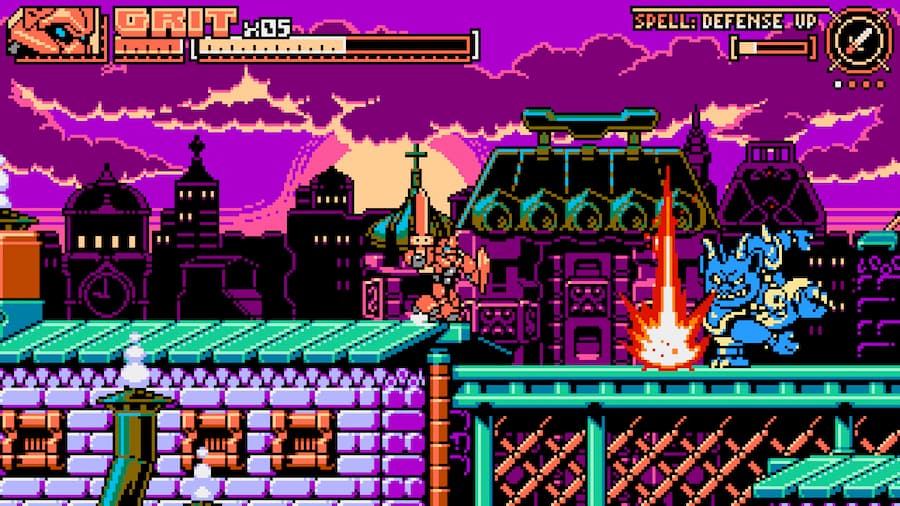 The backstep dodge mechanic doesn’t feel quite right either. Its implementation here reminds me of Bloodstained: Ritual of the Night. When you backstep, you go in the opposite direction you’re currently facing, not in the direction you press. It feels counterintuitive, and doesn’t seem to be all that useful during boss battles.

“Its art direction and music is stellar”

The game allows for some character upgrades within the Laboratory, but this system is a little boring. It seems you can only increase the amount of health Grit has, and nothing else. This decision was probably made because of how the weapons can be broken down to provide buffs during battle, which makes sense. But a more robust upgrade system, allowing Flame and Grit to be improved in more ways, would go a long way.

But for all its missteps, the highlights of Panzer Paladin shine brighter. Its art direction and music is stellar; its 8-bit style, bold and colourful, takes you right back to the early 90s. Weapon Keepers are wonderfully designed, too. These bosses are based on mythological creatures, such as the Egyptian Anubis in Ancient Greece’s Medusa. The soundtrack is absolutely the best part of the experience, however. The high energy tunes truly capture the superhero adventure aspect of Panzer Paladin; everything from the intro, to the levels, and the battles make you want to rock out with the music. 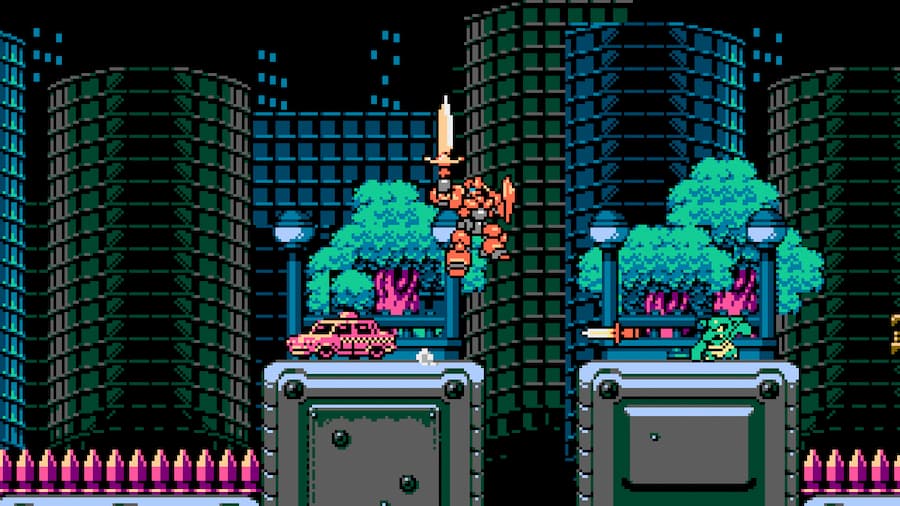 After completing the story for the first time, a variety of different modes will become available, including speedrun, boss rush, and a ‘remixed’ story mode. The last one is particularly interesting; it’s essentially a New Game Plus mode where levels have been redesigned to be harder. However, you do get to keep the upgrades you made to Grit from your previous playthrough, as well as any weapons leftover. Overall, it provides enough replayability after you’ve gone through the game once.

If taking a trip back in time with an old-fashioned platforming game sounds like a good time to you, Panzer Paladin won’t disappoint. Its excellent visual direction and soundtrack definitely helps it stand out from the crowd, and once you get a handle around its core weapon system, it becomes clear that there aren’t many other games out there that play quite like it. Panzer Paladin sticks hard to its old school influences, even if sometimes to a fault, but it mostly pays off.

Panzer Paladin is available on Switch and PC. We reviewed the game on Steam with a code provided by the publisher. 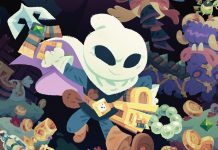 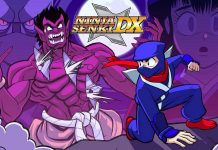 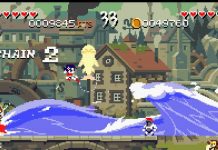