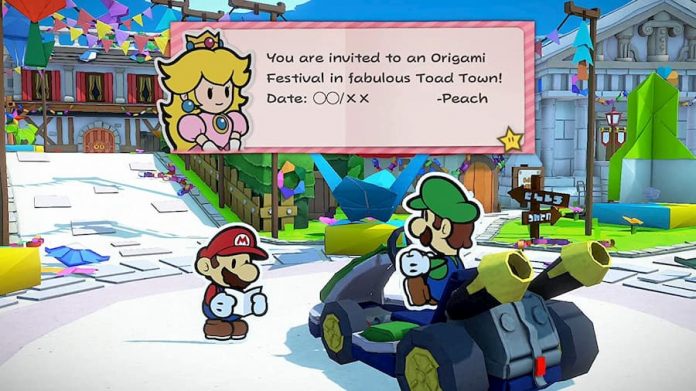 At this point, I’m not sure whether to be envious of Mario or not.

On the one hand, his life of full of adventures; he gets to travel here, there and everywhere, and engage in countless activities. But on the other hand, his adventures are generally the result of nefarious schemes cooked up by his enemies or other dastardly individuals. It can’t be nice being such a target all the time.

This time, it’s Mario’s paper-thin variant’s turn for a troublesome escapade. Invited by Princess Peach to an Origami Festival near her castle in Toad Town, Mario, accompanied by Luigi, enthusiastically get on their way. When they get there, something seems amiss, however, and it isn’t long until Mario comes face-to-face with someone calling themselves the Origami King. Their aim: to turn the entire Mushroom Kingdom into origami.

“As popular as Mario is, it’s the colourful world of Paper Mario: The Origami King that’s the real star”

Taking control of Mario, your ultimate goal in Paper Mario: The Origami King is to regain access to Princess Peach’s castle and put a stop to the Origami King’s plans. It’s been ripped from its foundations, you see, and now lies protected by five streamers. Cue an adventure that will see Mario travel far and wide, searching for the anchor points of the streamers so that he may lower their papery shield.

Mario’s not alone on this adventure though. Rescuing Olivia, the Origami King’s sister, she sticks to Mario like glue, seeking to put a stop to her brother’s antics. Mario also encounters his many other allies during his travels, who help out where they can. And in the face of the new threat, even his enemies work with him rather than against him; “the enemy of my enemy is my friend”, as they say. Ultimately though, this is Mario’s journey, and so he’s the only character you’ll be controlling, even in battle. 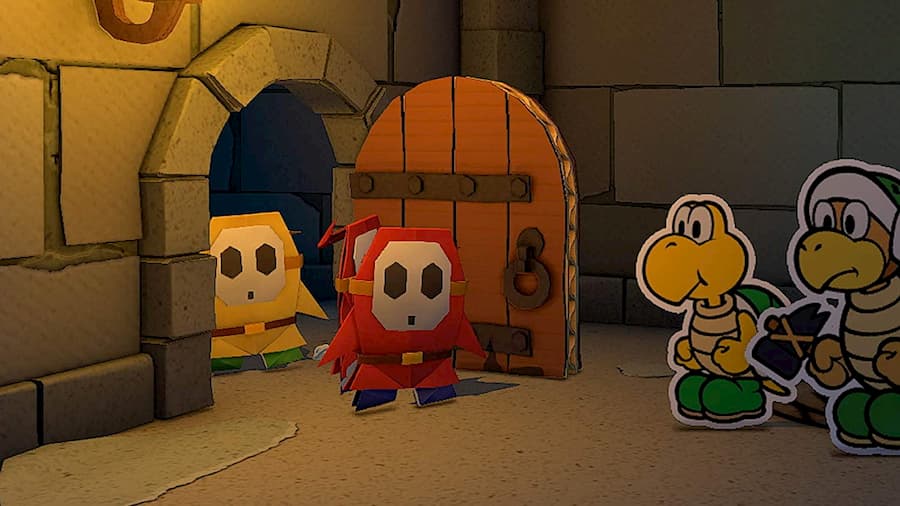 As popular as Mario is, it’s the colourful world of Paper Mario: The Origami King that’s the real star. It is absolutely beautiful, making you want to explore every single nook and cranny of it. There’s reason to as well, as there are countless interactables and secrets to be found. Whacking a tree with your big hammer, for example, will release confetti which is more useful to you than you initially think. And pulling on mysterious clips of paper may reveal characters who have experienced some misfortune.

Each and every one of Paper Mario: The Origami King‘s areas begs to be explored. There are puzzles to solve, Toads to be rescued, and items to be collected. The only thing that rivals the game’s brilliant atmosphere is its dialogue, which is constantly amusing, and often downright hilarious. The comforting, laid-back nature of it all makes playing Paper Mario: The Origami King almost therapeutic – until you come face-to-face with a folded paper monstrosity that wants a piece of you, that is. 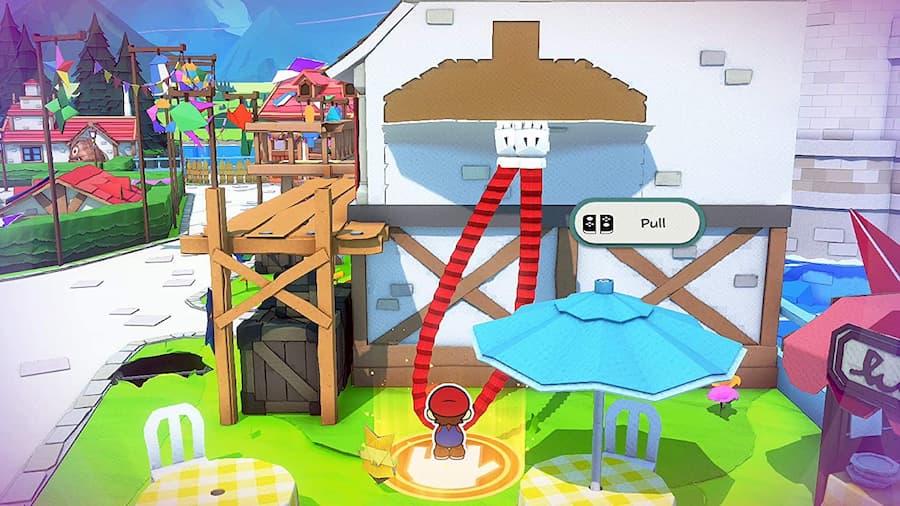 Combat in Paper Mario: The Origami King isn’t probably what you’d expect. In fact, each combat encounter is more akin to a puzzle. With Mario occupying a circle at the centre of the arena, enemies are placed within panels that radiate out from him. At the start of the fight they get mixed up, and then you get the opportunity to manipulate the panels to make fighting the enemies atop them more manageable. They key is to arrange them in ways in which your weapons have maximum effect.

“The uniqueness of Paper Mario: The Origami King‘s battle system unfortunately can’t save it from feeling repetitive after a short while”

Your boots, for example, are great for bouncing off enemies one after another if they’re in a straight line, while your hammer can hit four enemies grouped together right in front of you. Arrange your enemies right, and nearly all battles can be won without ever taking a scratch. Take too long to arrange your enemies or move them in the wrong way, however, and Mario will experience pain. Most players really shouldn’t have any problems being victorious in battle though.

The uniqueness of Paper Mario: The Origami King‘s battle system unfortunately can’t save it from feeling repetitive after a short while. There’s just not enough spice to it to keep it interesting after your 20th encounter, let alone your 100th. And then you have the fact that it’s largely pointless. There’s no experience to be earned, nor does it have a levelling system. Win a battle and you’ll be showered with coins and confetti, but they’re more easily obtained outside of combat anyway. 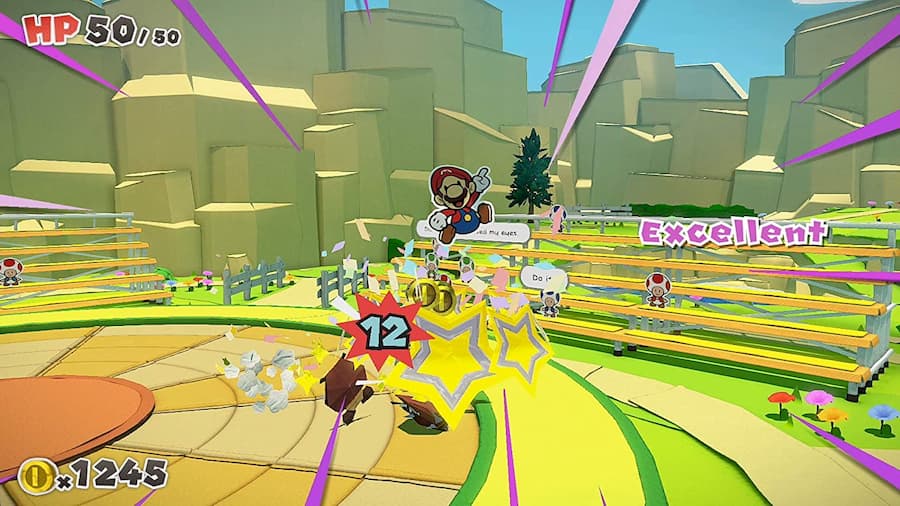 “Paper Mario: The Origami King has a huge amount of charm”

Boss encounters do somewhat turn the game’s battle system on its head, however, sparking your interest for however long they last. Instead of Mario being at the centre of the arena, it’s occupied by the boss, with Mario placed on the periphery. The challenge, then, comes from making a clear route to the boss during the arrangement phase, rather than lining enemies up in front of him. It’s a simple twist on the formula, but one that really does breathe new life into it.

The saving grace is that combat isn’t all that frequent in Paper Mario: The Origami King, so it doesn’t bring the experience down all that much. You’ll have so much fun exploring its papercraft world and devouring every line of its sumptuous dialogue that you’ll just grit your teeth and persist through the battles you encounter, knowing full well that in a minute or so you’ll be back at the good stuff. It isn’t perfect, but Paper Mario: The Origami King has a huge amount of charm, and those with a keen sense of humour and adventure will find themselves effortlessly falling in love with it.

Paper Mario: The Origami King is available on Switch. This review was facilitated by a code from the game’s publisher.