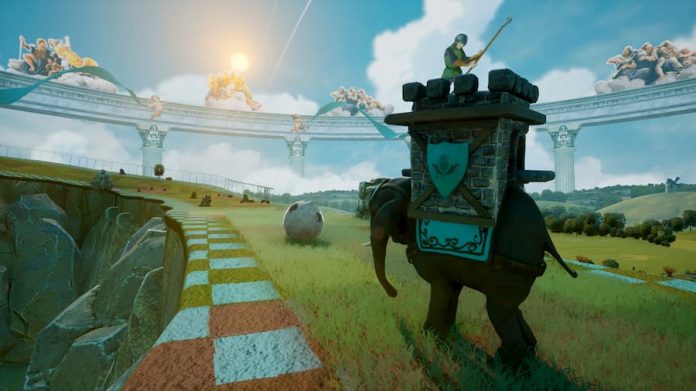 If you’re reading this, chances are you aren’t new to this boulder rolling business. But even if you are, all you really need to know is that Rock of Ages 3: Make & Break offers the ultimate test of your ball control.

That’s right, the comedic tower defence, slash action, slash strategy game is back, offering yet another inventive bunch of levels for players to roll their often misshapen boulders though. But this time there’s a rather snazzy new feature that should add a considerable amount of life to the title: the ability to create your own courses. That’s why it’s Rock of Ages 3: Make & Break, you see?

For many players, story mode will still be the main draw of Rock of Ages 3: Make & Break. And they’ll be happy to find that it’s expansive. Exploring a map in their little ship, they’ll unlock bunches of levels by acquiring stars. Each bunch of levels can include a variety of objectives such as Skee, where players race through a course, hitting targets for points before rolling their boulder up a ramp to try and get it into a score multiplying hole, or time trial, where the player’s boulder is replaced with a bomb primed to explode and they’re forced to race to the end of the level as quickly as possible.

“…the ultimate test of your ball control”

Some level objectives, however, include a hefty dose of tower defence. In Avalanche, Unit Challenge and War, you’ll be placing defences to prevent your opponents’ boulders battering your castle doors. To do that you’ll need to collect gold, understand what each unit available to you does and how it’s best placed, and act fast. In Unit Challenge and War you have the added task of destroying your opponents castle before they destroy yours, too, so in between placing and managing your defences, you also need to do some rolling yourself.

Rock of Ages 3: Make & Break‘s challenging yet fun mix of action, strategy and tower defence is bolstered even further by some levels that are a bit out of the ordinary. You might find yourself saving a dragon from Mongols, for example, knocking them from underneath the giant beast before then smashing others off its back. And then there are the levels in which you roll Humpty Dumpty through Wonderland, trying your best not to crack his shell while facing an onslaught of obstacles and defences. 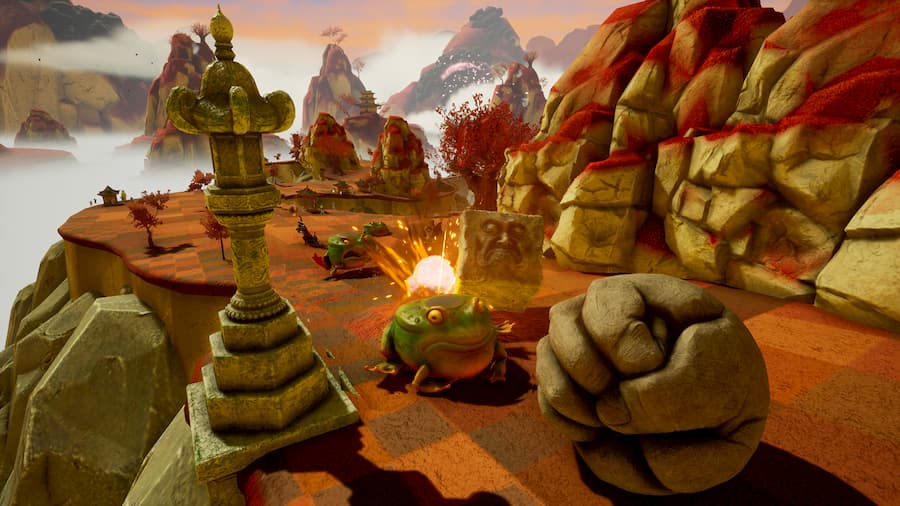 “What really makes Rock of Ages 3: Make & Break‘s story mode a joy to play is its stage variety”

As you make your way through Rock of Ages 3: Make & Break‘s story mode, you’ll unlock lots of different boulders with which to compete, each with their own quirks and stats. There are plenty of non-boulders, too, including a tyre, and even a ball of sheep. The stars you earn based on your performance can be used to unlock additional defence units, too. Together, they make going back to previous levels fun, and allows you to more effectively conquer the game if you were previously struggling to plunder all of a level’s stars.

What really makes Rock of Ages 3: Make & Break‘s story mode a joy to play, aside from its easy to pick up but hard to master gameplay, is its stage variety. There’s everything from the picturesque countryside to decadent Roman structures, with Wonderland and even a hellish world made up of spaghetti and meatballs in between. And then there’s the fact that you don’t have to adventure alone. Rock of Ages 3: Make & Break supports local and online multiplayer. Is is competitive? Is it co-op? Truth is it’s a mixture of both. You’ll want to beat your friends, but if there’s AI involved, you’ll collectively strive to beat those primarily. 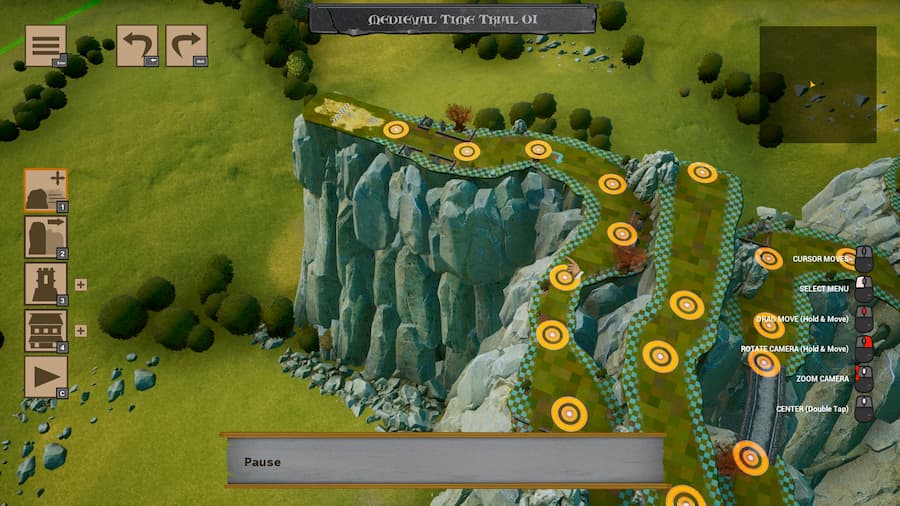 “Rock of Ages 3: Make & Break is the best game in the series yet”

In the long run, it’s playing others’ creations that is likely to be Rock of Ages 3: Make & Break‘s biggest draw. Its course creator allows you to quickly and easily put together your own fiendish levels, stuffing them as full of hazards as you wish. Once built, you can keep them to yourself or upload them for the community to enjoy – it’s up to you. Even if you don’t have a creative bone in your body and have no intention of creating your own levels you’ll benefit from the course creator; there are already some fantastic and inventive player creations available.

Only a couple of issues let Rock of Ages 3: Make & Break down a little. Firstly, we’ve encountered a fair few bugs playing on PC, especially when playing in local multiplayer; from crashes, to elements of the HUD remaining on screen when they shouldn’t. Also, skee ball levels: we love them, but the way they just cut off when the first player or AI enters a hole at the end is scrappy and anticlimactic. It would be nice if it instigated a timer for others to finish their runs instead. 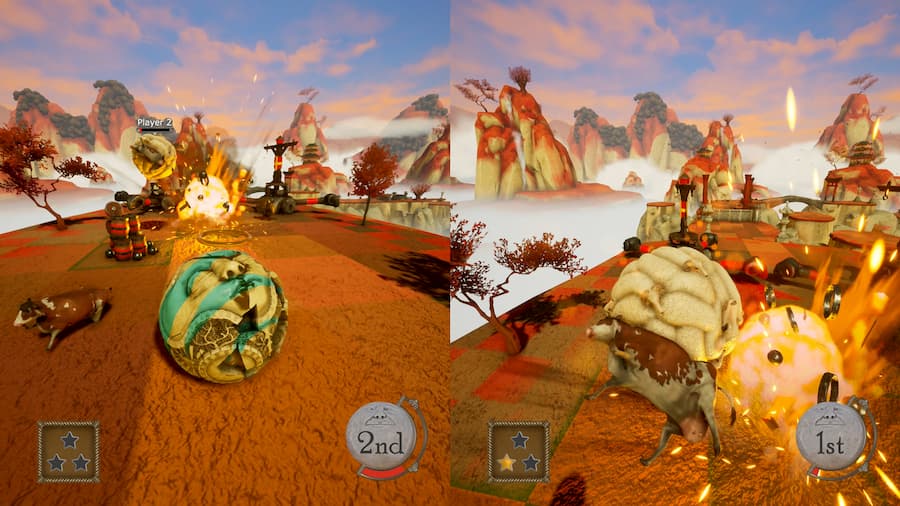 Still, there’s no doubt in our minds that Rock of Ages 3: Make & Break is the best game in the series yet. A lengthy campaign laden with Monty Python-esque humour is bolstered by a powerful course creator that offers perhaps unlimited replayability. And the gameplay itself remains as enjoyable as ever; an eclectic mix of action and strategy that is accessible and fun for all. If you’ve ever found yourself enjoying rolling boulders through a gauntlet, this game is a must-have. Even more so if you also enjoy a spot of tower defence too.

Rock of Ages 3: Make & Break is available on PS4, Xbox One, Switch and PC. We reviewed the PC version with a code provided by the game’s publisher.

Rock of Ages 3: Make & Break is a Must For Series Fans 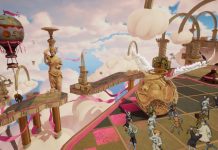