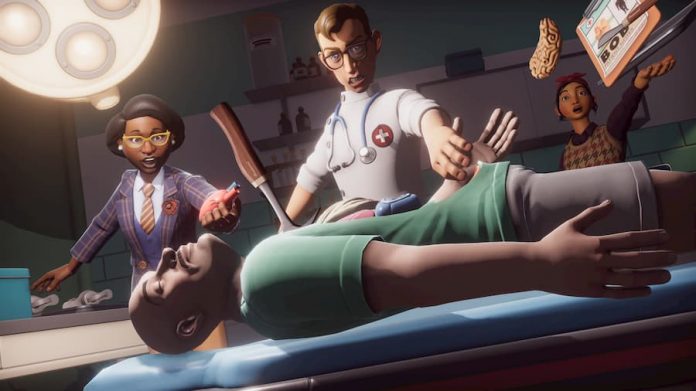 Hacksaws and shaky hands at the ready: Surgeon Simulator 2 is releasing on PC on 27th August.

Announced last month, the follow-up to Bossa Studio’s successful Surgeon Simulator is just a few weeks away. And with a newly-unveiled creation mode known as Bossa Labs, it promises to be bigger and better than ever.

Alongside Surgeon Simulator 2‘s zany story mode, that’ll see you cutting into patients in a variety of settings, Bossa Labs allows players to create their own levels and situations. Expect the same physics-based lunacy that players loved from the first game, but with one key difference: you get to orchestrate the chaos yourself.

Bossa Labs provides players with the same toolkit Bossa itself used to create the game. You can tackle creation by yourself, or join forces with up to three other players to work together. Perhaps you want to create an epic surgery challenge that’ll take some serious skill to overcome, or maybe you want to play around with putting together your own zany contraptions. Even environments are yours to create; you’re limited only by your imagination.

So: body surgery and game surgery in one package. Sounds like a good deal to us. Surgeon Simulator 2 will be available on PC via the Epic Game Store on 27th August. Pre-orders are open now, and doing so will grant you access to the closed beta between 7-9th August. Players who pre-order will also get the Mad Scientist cosmetic set free.