Those little jelly beans are in for some new surprises.

It’s been a little over a week since Fall Guys: Ultimate Knockout released for PlayStation 4 and PC. Since the game’s launch, the game has sold over 2 million copies and counting on Steam alone.

Yesterday, on the Fall Guys’ Twitter account, the game’s developers announced that it’s about to get a new update. The update adds a new level, new costumes and some much-needed fixes.

Jump Showdown – A fan-favourite from the beta! ?

We'll be adding it in our first update TOMORROW!

More new levels will be coming soon – along with new features & costumes ? pic.twitter.com/zQ4hOI70MP

The new level, Jump Showdown, is making a return from the games’ beta. It has players on a donut-shaped playing field, jumping and ducking under and over spinning bars to avoid getting knocked off. If that wasn’t enough, the platforms that players are standing on also fall.

The full patch notes for the game are available in the Twitter thread, but the key updates include:

And, of course, if you’re looking to dress up your little jelly beans, you can look out for some new cosmetic items available today as well. 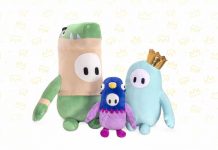