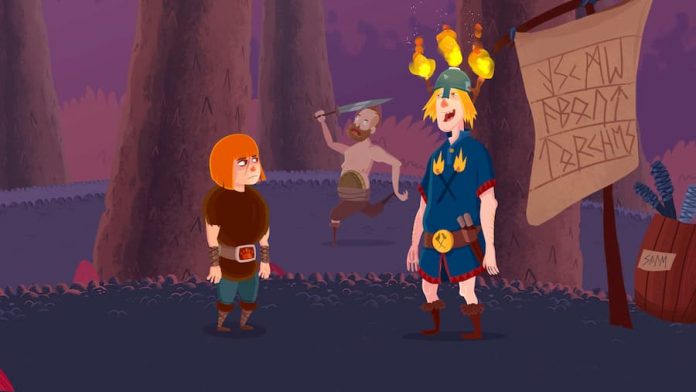 Poor old Bjørn Hammerparty. He fell to his death as he tried to flee his battle. Now, a thousand years later, he finds himself brought back to life by an employee of Death – and he has a strange new ability.

That ability happens to be that he can remove his head and his limbs at will. It’s pretty grim, but being able to send your arm scuttling off by itself has a surprising amount of uses. And so goes the premise of Helheim Hassle, a game that will have you dismembering and reconfiguring Bjørn again and again, all in the name of solving puzzles.

You see, that employee of Death, Pestilience (or Pesto as she likes to be called), has been sent on a mission to visit Helheim. The newly-reanimated Bjørn agrees to help her get there, on one condition: he gets to stay in Hel. His last 1,000 years in Valhalla haven’t been great, apparently. But getting to Helheim is no easy task; the goblins in charge of paving the route have a penchant for designing puzzles. Luckily, it just so happens that Bjørn’s limb-separation skill is the perfect thing to solve them.

Helheim Hassle then, is extremely puzzle-heavy. Split up into groups, new mechanics are regularly introduced to keep things varied. Sometimes you’ll simply have to toss a limb onto a high platform; other times you’ll have to navigate invisible laser beams or sneak past furniture-obsessed zombies. A lot of the time, they’re enjoyable to solve, and figuring a particularly tricky one out is rather rewarding.

Coming from Perfectly Paranormal, the studio behind Manual Samuel, Helheim Hassle is loaded with the same excellent humour and characterisation. In fact, it’s set in the same universe – apparently taking place on the very same Tuesday. So if you’ve played Manual Samuel, there are a number of references and cross-overs that you’ll get a kick(flip) out of. It employs the same hand drawn cartoon art style too, which is simply wonderful to look at. It’s clear a lot of care and effort has gone into bringing Helheim Hassle to life. 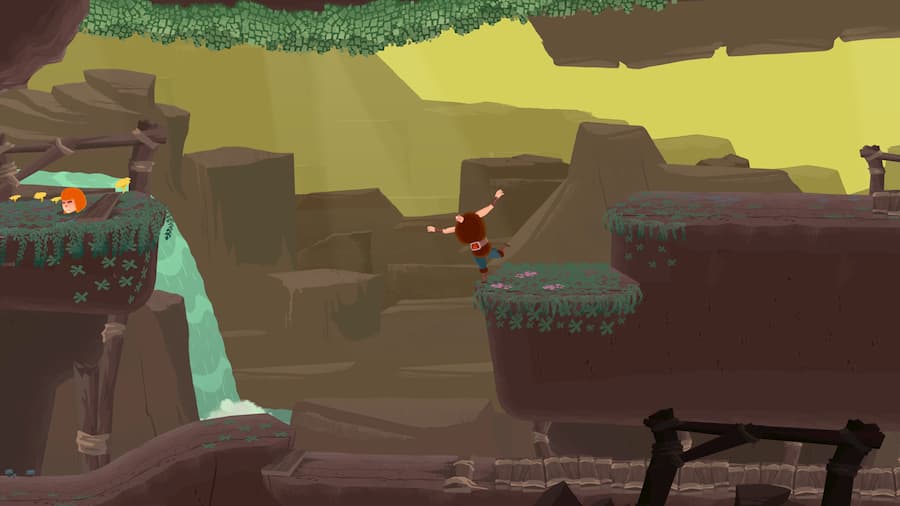 Each character is fully voiced, and across the board, vocal work is of a seriously high standard. A range of regional accents helps give the characters diverse personalities, and it’s hard not to smile at any one of the game’s many cutscenes. I’m not quite sure if Pesto has quite the same charisma as Manuel Samuel‘s Death, but she makes for an excellent companion all the same.

“For everything that makes Helheim Hassle great, there’s a less than stellar design choice that dampens the overall enjoyment of the game”

Not all is perfect on the road to Hel, however. For everything that makes Helheim Hassle great, there’s a less than stellar design choice that dampens the overall enjoyment of the game. Problems start to rear their ugly head when it comes to solving puzzles that rely on fast actions and quick precision. The nature of Helheim Hassle and its control scheme means its extremely difficult to be fast and precise. You’ll need a lot of patience to complete some of the game’s later puzzles.

You could have six different body parts dotted around to switch between – which you can do with the right stick, or toggle with the shoulder buttons. It’s impossible to accurately select one piece, especially if they’re all fairly close together. The same is true for merging two particular body parts – different combinations work in different ways; for example, legs can jump remarkably high, whereas hands are necessary to operate switches or grab onto ledges. So you’ll often need to merge an arm and a leg, for example, or a leg and your head (which is necessary for talking, obviously). To merge body parts, you need to control one of them, then press a button when prompted to ‘merge’. It’s straightforward enough, unless multiple body parts are in a pile. You’ll need to make sure everything is spread out enough to be able to select what you need. 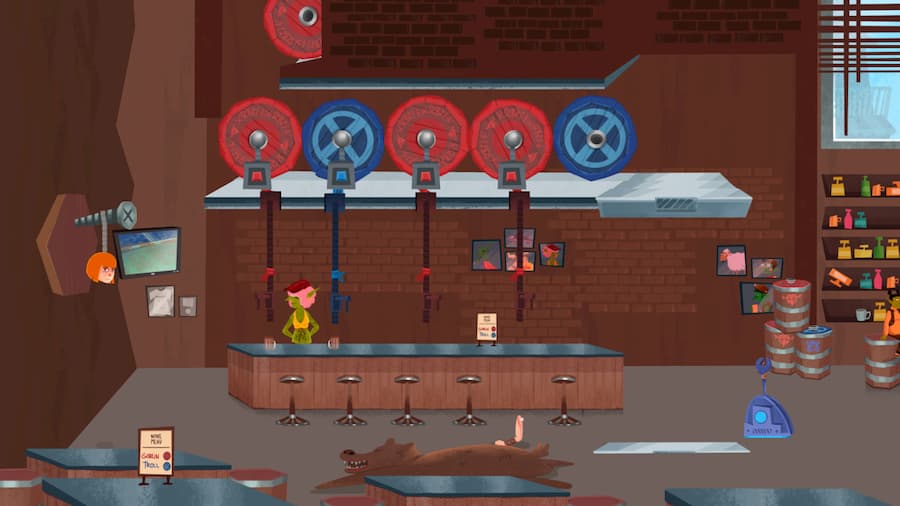 Throwing limbs can also be fiddly. When he’s whole, hitting the left trigger initiates a throw of Bjørn’s head. To toss an arm or a leg, you’ll need to press the corresponding direction on the d-pad. You’ll always need to do this, unless you already have the correct limb detached and in your hand, ready to be thrown.

None of this is much of a problem until you’re against the clock. Maybe you’re being chased and need to solve several puzzles quickly before getting caught. It happens several times throughout the game, each time requiring you to complete a sequence flawlessly. Mess up and choose the wrong body part, or throw the wrong limb and you’ll have to start over.

There’s also a number of occasions where you’ll need to do something mid-air. You’ll need to toss a limb, then switch to it to merge it with another limb before it lands. It sounds easy but it leaves you with literally one second to fumble over the buttons on your controller, make sure you’ve selected the correct limb then push another button to merge. Some bits are so tricky and require such a level of precision that only those with great patience and persistence will ever overcome them. It also means that, in terms of accessibility, it’s an absolute nightmare. 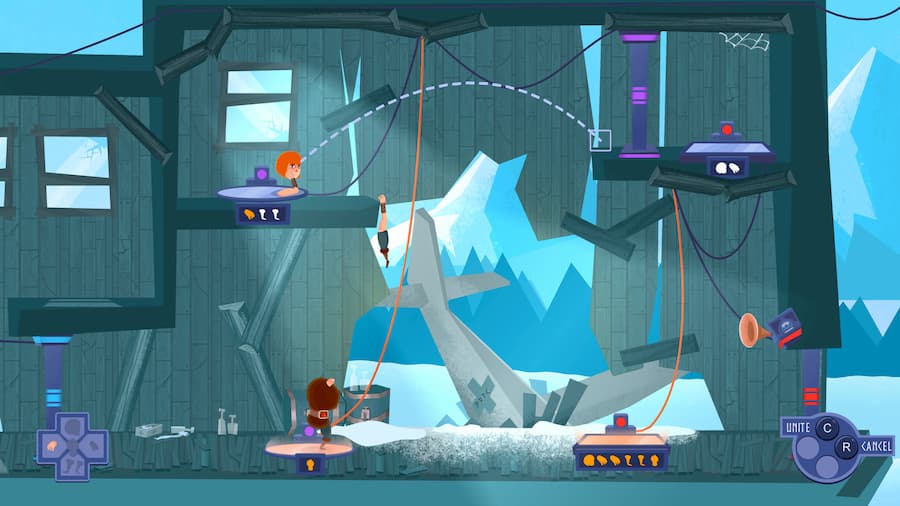 In an interview we did with Perfectly Paranormal earlier this year, the team proclaimed Helheim Hassle to be “six times bigger and better than Manual Samuel“. Bigger it certainly is, but that’s not necessarily a good thing. While a frequent change-up of puzzle mechanics does help to keep them feeling fresh, it’s still hard to shake the feeling that they outstay their welcome. Manual Samuel is the sort of game you can complete in one evening. Helheim Hassle is considerably longer – and there’s a wealth of side-content that you can complete to extend your playtime even further. Those optional puzzles and hidden areas are welcome, but the main slew of puzzles could be condensed without taking anything away from the experience as a whole.

There’s a hell of a lot to love about Helheim Hassle. Its world, animation, characters and storytelling are all excellent; in terms of art and sound design there’s a level of polish rarely seen outside of AAA releases. But there’s also a lot that lets it down. Had it been a little tighter and had the most frustrating puzzles been worked on just a bit more, Helheim Hassle could have been one of the best indie games of the year. As it is, a convoluted control system and some badly-designed timed puzzles are going to most likely make you rage. You’ll get a kick out of many aspects of Bjørn and Pesto’s journey, but there’ll be times you’ll just want to throw Bjørn’s limbs into the fieriest pits of Hel yourself.

Helheim Hassle is available on PC, PS4, Xbox One and Nintendo Switch. We reviewed the game on Xbox One X with a code provided by the publisher.

Check Out This Helheim Hassle Gameplay Video With Developer Commentary

Death and Kickflips: An Interview With the Creators of Manual Samuel