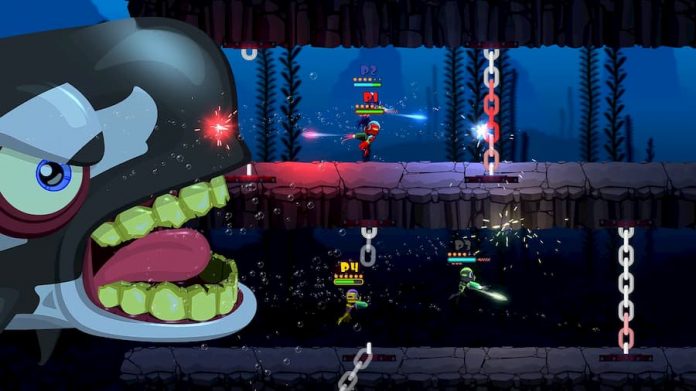 Like getting your ass handed to you again and again? Perhaps you ought to try out Swimsanity!.

Out today on PC and consoles, Swimsanity! is a side-scrolling shooter designed with multiplayer in mind. The main game mode sees you work together to conquer an environment, shooting your way through schools of weird-looking fish, all the while running away from – or otherwise avoiding – some huge beastie. But it’s much harder than it sounds.

There’s half a dozen levels available, each of them with a different spin. Perhaps you’re swimming right, trying to outrun a huge whale that’ll swallow you whole. Or maybe you’re swimming up, down, left and right through a labyrinth of tunnels, avoiding the path of a killer worm. Your goal, always, is to survive and reach the end of the level. But good luck.

I’m going to level with you: I haven’t come anywhere near reaching the end of a level. Not once. Swimsanity! is designed to be fiendish; it’s the sort of game that you’ll get a ‘game over’ on, you’ll curse, but you’ll jump straight back in. You don’t want to be bested by those damn mechanical fish. So you’ll keep trying.

Even small-fry in Swimsanity! take some time to kill, though. Take the whale-chase level for instance. Sometimes you need to shoot through enemies in order to move forward; you’ve got about a 20-second head start on your huge foe, but it doesn’t get you very far. Find yourself stuck on a wall or up against a line of fish, and that whale will soon appear. You can shoot at it to hold it back a little longer, but you also need to shoot everything else around you. You can use a ‘dash’ to get past obstacles and enemies, but you have a limited amount of these, so you’ll want to save them for when you really need them. 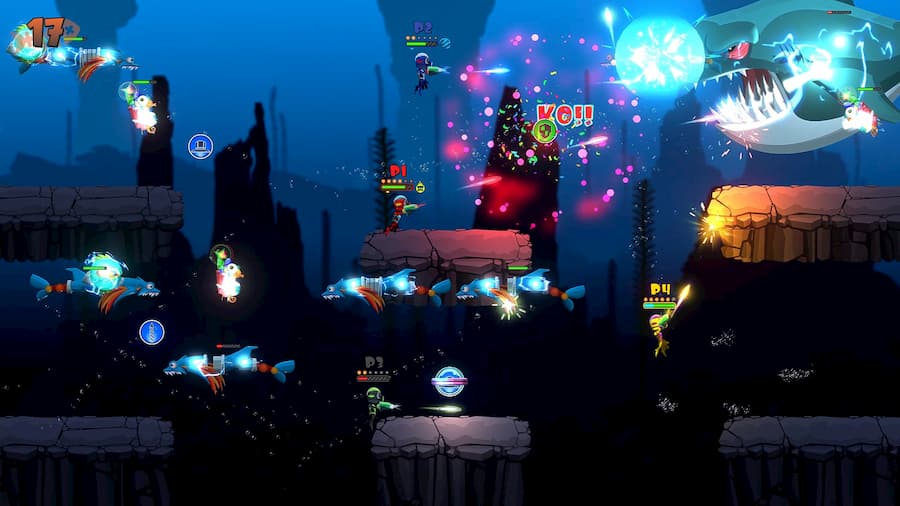 There are plenty of different game modes to keep you occupied with Swimsanity!, though. The main mode, Adventure, has a few different difficulty levels just in case the default mode isn’t hard enough for you (you monster). There’s also a wave-based survival mode, which tasks you with shooting your way through waves of smaller enemies. And if you want to go head-to-head with your multiplayer buds, there are plenty of options to do that, too.

But the highlight for me remains being chased by that giant whale. Maybe I’ll never outrun him. Maybe being eaten time and time again is simply my destiny. But I can keep trying, damn it.

Swimsanity! is available now on PC, Xbox One and Switch. It’s coming soon to PS4. More information is available on the game’s website.