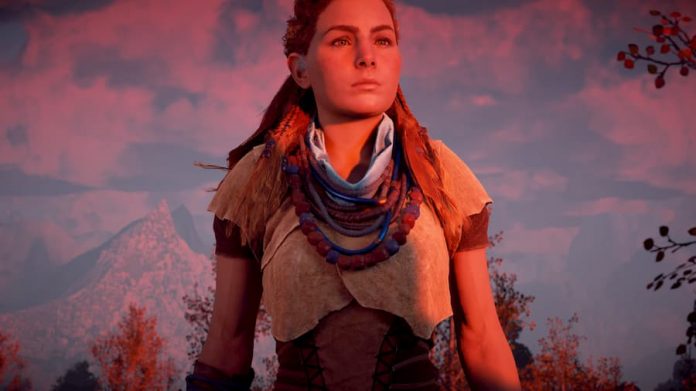 It’s a rare treat, a first-party title being made available on another format. And a very welcome one indeed.

Some three years after its release on PS4, Guerrilla’s Horizon Zero Dawn has found itself on PC. It’s the Complete Edition too, including the game’s fairly hefty The Frozen Wilds expansion, as well as numerous other tidbits. And of course, there are some PC exclusive features, too.

But first let’s go back to the beginning; for the uninitiated, what is Horizon Zero Dawn?

Casting players as a determined, red-haired warrior named Aloy, Horizon Zero Dawn is an open-world, action-RPG with a unique setting. It’s set far into the future, when, for some reason, humans have pretty much abandoned technology, instead taking things back to basics. But reminders of the past still exist, not only in underground structures, but also via the metallic monsters that roam the land, sea and air.

Beginning the game as a young Aloy, we witness her struggle to comprehend being an outcast. A conscientious child, she has an aptitude for combat and quickly picks things up. She’s brave too; upon finding a mysterious device, which she calls a Focus, she doesn’t hesitate to give it a try, and finds herself with so much information at her fingertips. Many others are fearsome of such things. To her though, it’s just a tool; something that both brings her comfort, and may also one day lead her to discovering who her mother is. 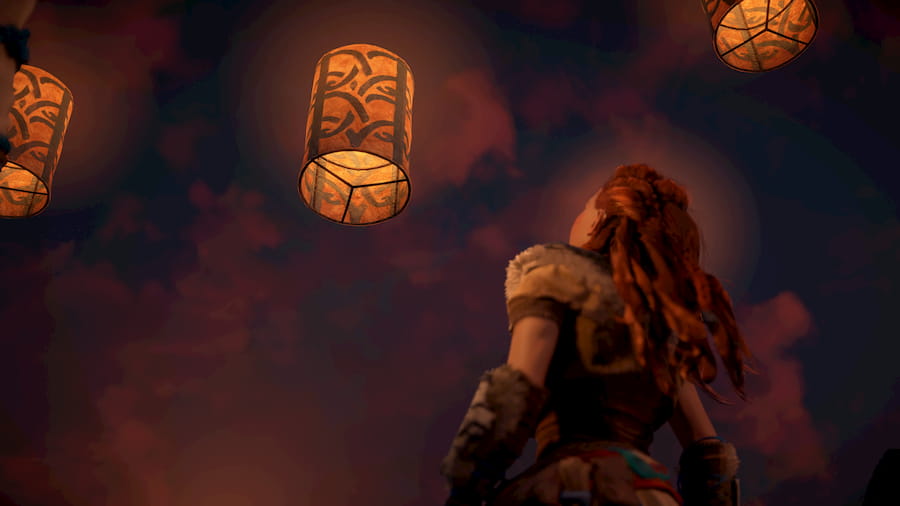 “Combat against robotic beasts is enjoyable, thanks largely to the wide variety of weapons at Aloy’s disposal”

It’s Aloy’s desire to find a place in the world that lands her the role of a Seeker, and with trouble brewing, she heads out for answers. But it’s not a simple sight-seeing and fact-finding excursion she’s embarking on; instead, it’s one full of peril, intrigue, and treachery. You can head straight through the game’s story if you wish – no missions are gated – though a levelling system means that you might find yourself struggling if you dash ahead without engaging in the odd side-quest or combat encounter.

Combat against robotic beasts is enjoyable, thanks largely to the wide variety of weapons at Aloy’s disposal. She can make use of traps, opening up her foes to some risk-free hits, and has numerous ranged weapon and ammo options available. The real damage is done when you get up close and personal, however, striking at enemies with her spear. There’s only one thing that detracts a little from Horizon Zero Dawn‘s close-range combat: the lack of a lock-on feature. It makes combat a little messy and disorienting at times. 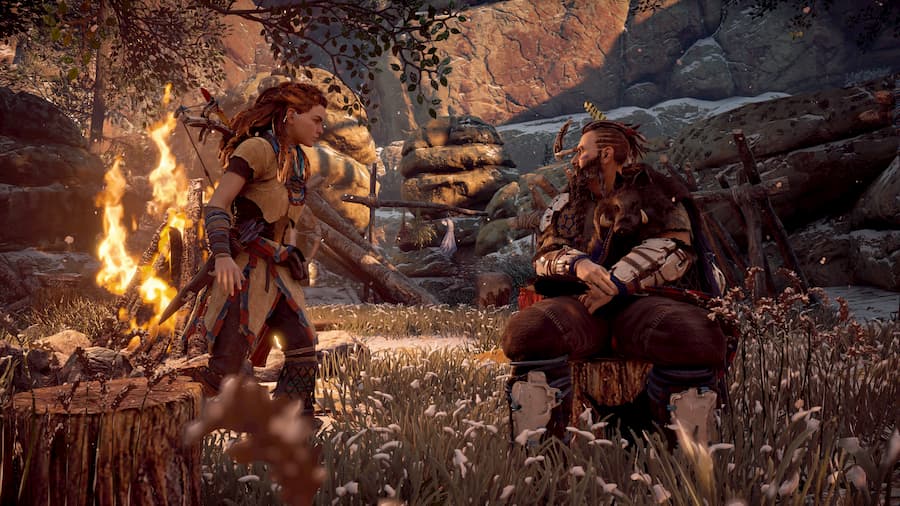 “In no time at all, you’ll be invested in Aloy’s adventure, keen to both discover her fate and develop her into the most powerful Seeker the world has ever known.”

When encountering large groups or metallic monstrosities, or a huge beast that’s many levels above you, it’s pays to employ stealth. Most enemies can be avoided entirely by keeping a low profile and using foliage and other environmental objects as cover, or you can sneak up on unsuspecting foes to deliver a powerful critical hit. It pays to study your enemies before engaging them in combat, too; Aloy’s Focus can highlight weakspots, as well as offer general combat advice.

Horizon Zero Dawn does try to mix its gameplay up a little though; it’s not all about fighting, or sneaking past, robotic creatures. Sometimes you’ll find yourself fighting humans, for example, or climbing gargantuan beasts to uncover the map around you. Some quests even make you use your Focus for tracking, retracing the actions of an NPC or seeking out information vital to your progression. It falls victim to open-world bloat at times, though. Not every activity you do will feel worthwhile.

Still, it’s engrossing enough to keep you playing from beginning to end. And you’re afforded a nice amount of build variety thanks to skill trees aplenty as well as a weapon and armour mod system. There’s a crafting system, too, making all that looting you do feel worthwhile. In no time at all, you’ll be invested in Aloy’s adventure, keen to both discover her fate and develop her into the most powerful Seeker the world has ever known.

My initial impressions of the PC port of Horizon Zero Dawn: Complete Edition were soured somewhat by a lengthy system optimisation process that runs the first time you boot up the game, taking around 15 minutes to complete. There’s a chance you might have to do it again when updating your drivers or installing new hardware, too. Even worse was the fact that the game then crashed every time I tried to make it fullscreen or change the resolution via the main menu. 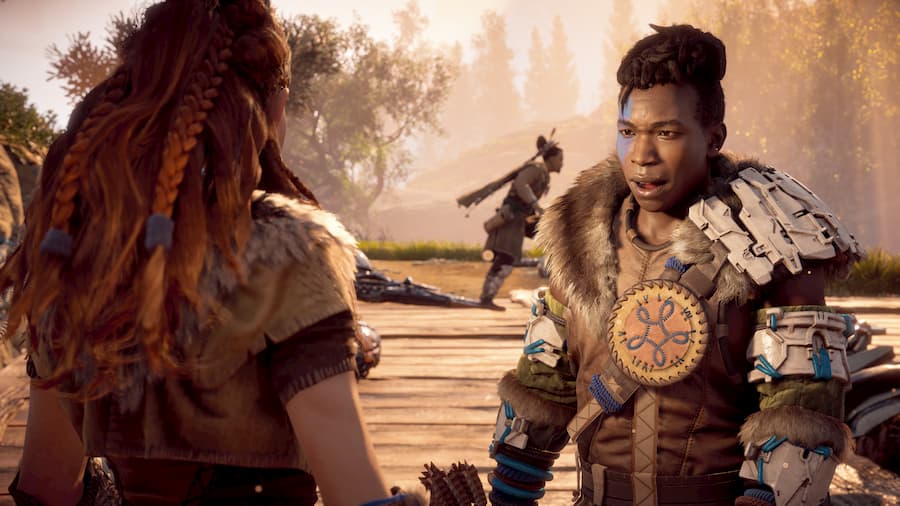 Thankfully, the day one patch has eradicated the crashing issue, but it has broken the anisotropic filtering setting. Work is being done to fix this, though, and in the meantime it’s easy enough to just apply it at a driver level. There isn’t an abundance of graphical settings, truth be told, but Horizon Zero Dawn: Complete Edition can indeed be made to look noticeably prettier than its console counterpart. At 1440p or 4K, it looks absolutely astounding.

There is still some optimisation work to be done though; there are occasional stutters for no reason, and getting a steady framerate can be a task. I found turning clouds down from ultra to medium gave me a nearly 20fps boost at 1440p, and I could hardly tell a difference in their quality at all. It also allowed me to pretty much lock the game at 30fps at 4K on an RTX 2070 paired with a Ryzen 5 3600. It’s just a shame that DLSS hasn’t been implemented, as that could have really boosted performance. 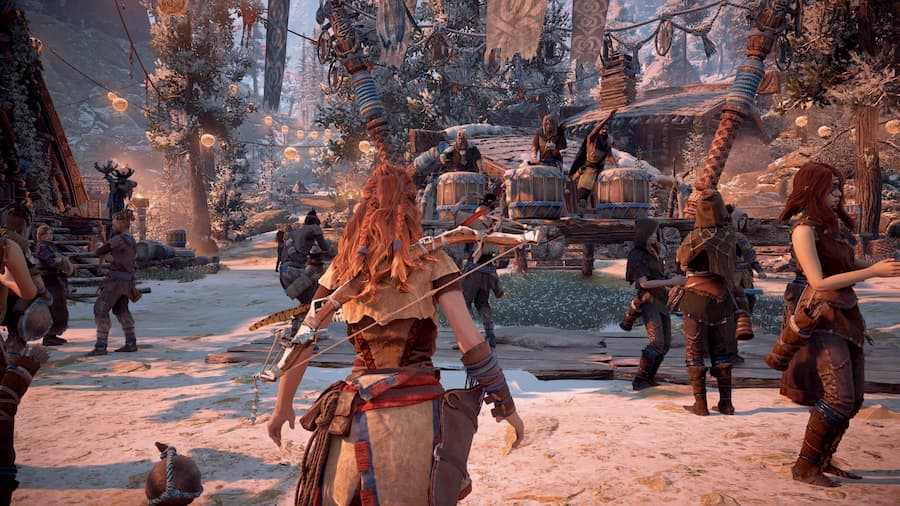 “This PC port of the Complete Edition may not be perfect, but it does successfully bring the game to a new format with additional bells and whistles”

Still, on PC, Horizon Zero Dawn has lots of things that PC players like to hear: native 4K, high framerate, ultrawide support, keyboard and mouse controls. They might not be overjoyed with the price though; at £39.99/$49.99 it costs more than twice what it does now on PS4. But it offers a lot of bang for your buck, so if you’re a PC gamer looking for a beautiful-looking and utterly engrossing open-world experience, you shouldn’t let the price put you off.

Horizon Zero Dawn was a great game when it released three years ago, and it remains a great game now. This PC port of the Complete Edition may not be perfect, but it does successfully bring the game to a new format with additional bells and whistles that will be much appreciated. And we’re pretty sure that Guerrilla isn’t going to rest on its laurels when it comes to ironing out its kinks. If you love open-world adventures set in unique and mysterious worlds, you really need to give Horizon Zero Dawn: Complete Edition a go, especially if your PC is capable of playing it at above console settings.

Horizon Zero Dawn: Complete Edition is available on PS4 and PC. We reviewed the PC version with code provided by the game’s publisher.