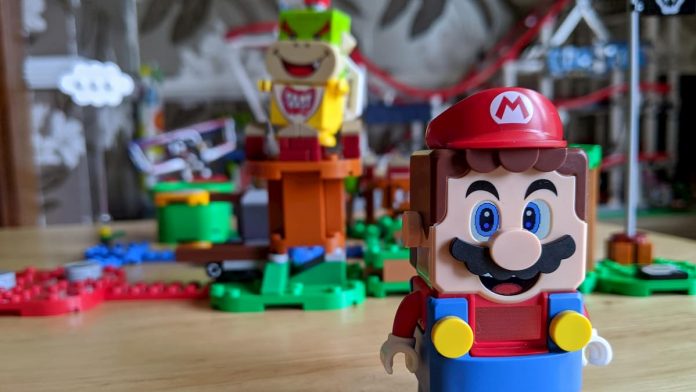 LEGO’s new Super Mario range might be the most unique thing the company has done for a while.

What’s in the box?

At only 231 pieces, the LEGO Super Mario Starter Course is a little on the small side. Bricks are separated into five numbered bags, there’s a ‘quick start’ guide, and an electronic Mario figure. That’s perhaps the most exciting part of the Starter Course; this set is the only way to get Mario so far, and you need him in order to engage with any of the other LEGO Super Mario kits.

Note the lack of any instruction booklet. The LEGO Super Mario series requires a companion app, available on iOS and Android. You’ll need to download the app, which will take you through the steps of building each course.

There are lots of neat printed bricks included in the set (no stickers to be seen anywhere, hooray!) and a lot of unique parts. Nowhere else are you going to be able to find a brown tile with a goomba face on it, or Mario’s hat, or a green pipe, for instance. 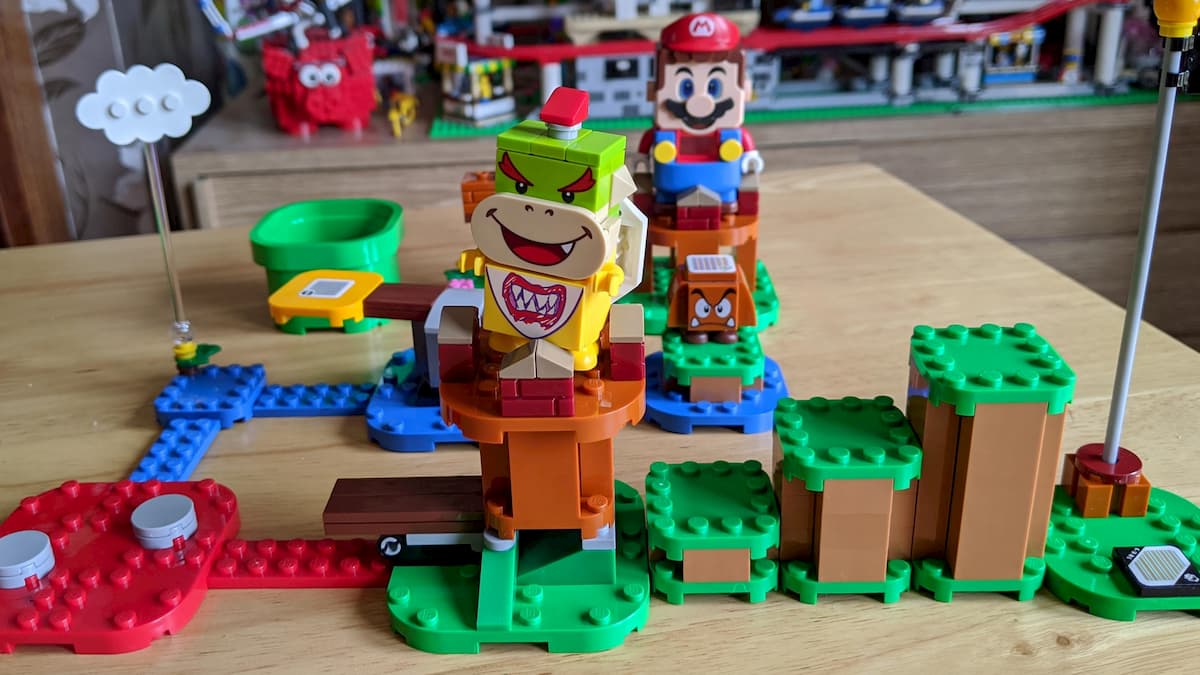 It doesn’t take much time to build up the LEGO Super Mario Starter Course, due to being only 231 pieces. The instructions are broken down into short, bitesize sections and are presented in incredibly simple terms; perhaps even more simple than your basic City set. It’s perfect to introduce younger children to building, as there’s nothing challenging here.

The most intriguing part of the LEGO Super Mario Starter Course, though, is that there’s no ‘right’ way to put it all together. The instructions will tell you how to build each section, like the small green platforms, or Bowser Jr., who you can see in the picture above, but how you configure it all is entirely up to you. The box contains a number of red, blue and green planks and plates which you use to join up the elements.

It requires a good amount of ingenuity, which is fun to exercise. Since the Starter Course itself is fairly small, there aren’t too many ways to configure it, but you still have plenty of options. The idea will come into its own, though, if you have any expansion kits. Your Super Mario course could be huge, with branching paths and multiple routes for Mario to travel through. Since there’s no right or wrong way to put it all together. It’s pretty neat. 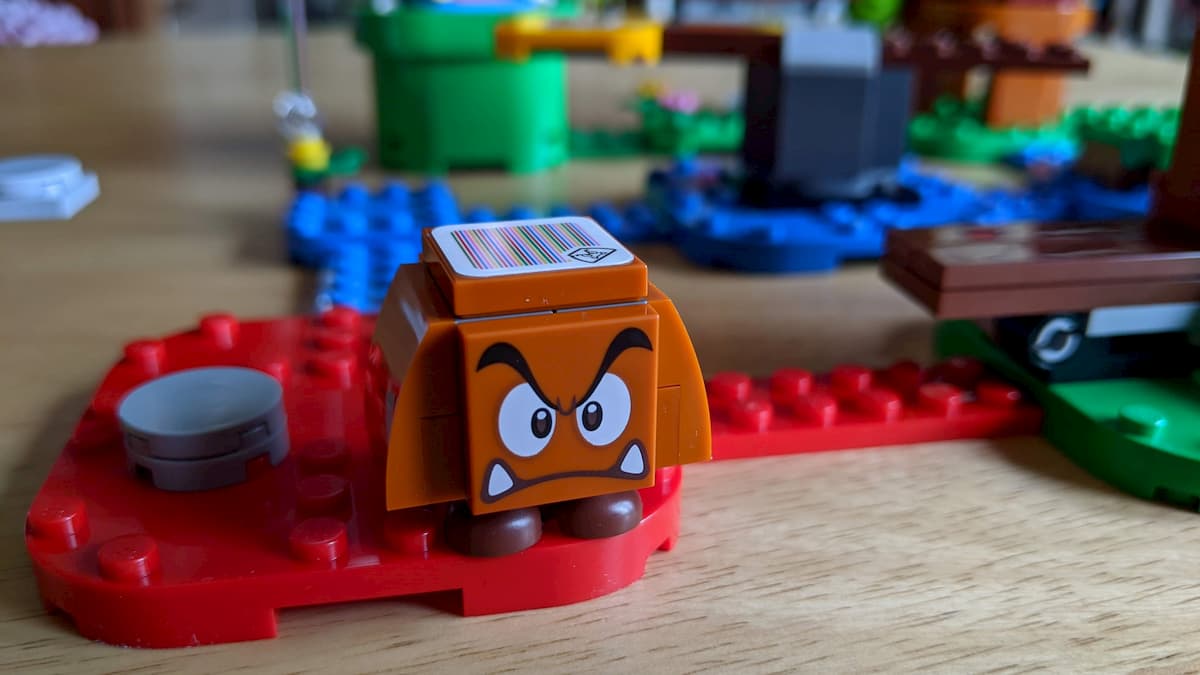 However: if you want to move it elsewhere, it becomes a bit of a nightmare. The elements are only held together with one plank or platform, so chances are when you try and lift any element, it’ll come apart. Be prepared to move each element one by one if you do need to move it.

LEGO Super Mario Starter Course is absolutely all about play. Perhaps more than any set that LEGO has ever made, actually. The electronic Mario is the heart of the set; once you’ve popped two AAA batteries in his back, he springs to life. Tiny LCD screens animate his eyes and mouth, giving him a range of facial expressions, and a further screen on his chest displays information about the course. A sensor on his underside reads what he’s standing on; so pop Mario on a red platform, and his screens will show flames to signify he’s on lava. Green and blue will show grass and water images respectively.

Each element – whether it be a goomba, a green pipe, a question mark block, a rotating platform or Bowser Jr. – has a barcode on it. When Mario stands on one of these barcodes, he’ll scan it. What happens depends on the element; jumping on the goomba, for instance, will initiate a ‘squash’ sound effect, and Mario will be rewarded a coin. As for the question mark block, you’ll get a random reward: either coins, a power-up mushroom or an invincibility star. The Mario figure plays sound effects and music for each as appropriate. It’s a delight, especially if you’re a Super Mario fan. 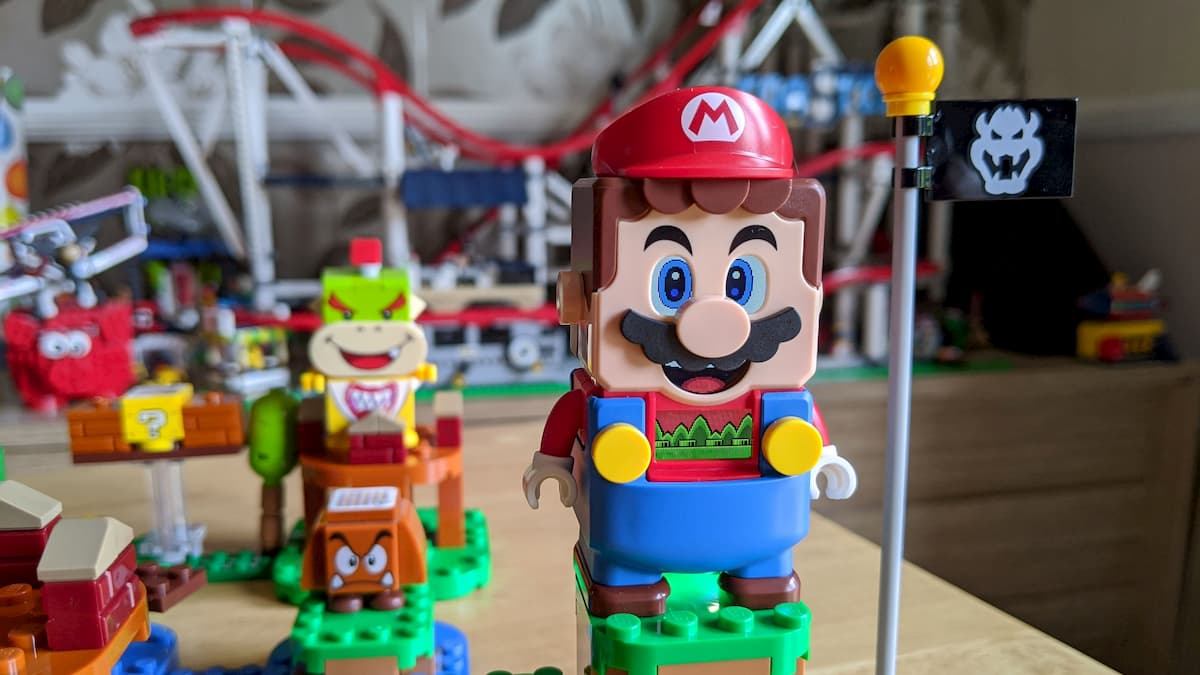 The course itself is designed to be travelled around, from start to finish. The green pipe signifies the start, and a ‘Bowser’ flag marks the end. Scanning Mario over the pipe’s barcode will initiate a 60-second countdown, and Mario needs to travel around the course before he runs out of time. At the end of the course, or when the time’s run out (whichever comes first), Mario’s screen will display a score based on the amount of coins you picked up. You can play the course again and again, trying to rack up a better score. Or you could challenge friends to see who can get the most coins.

The amount of fun you can have with this is limited with just the Starter Course; it only takes about 20 seconds to travel around, despite your best intentions to drag it out. But once you start adding expansion kits in there, you can make a course that’s impossible to finish in the 60 seconds, adding an extra layer of challenge.

Whether or not LEGO Super Mario Starter Course offers up good value for money is a tough call to make. In terms of bricks-per-pence, it absolutely isn’t – but the bricks themselves aren’t the focus here. It’s unlike anything else LEGO has put out. Undoubtedly much of the cost for the Starter Course comes from Mario himself. With screens displaying animations, a speaker to play sounds and a scanner to interact with his environment, he’s way more than a lump of plastic.

It’s also worth noting that lots of parts here are unique, which makes it an interesting prospect for collectors and those who like to have a huge range of parts available for MOCs. 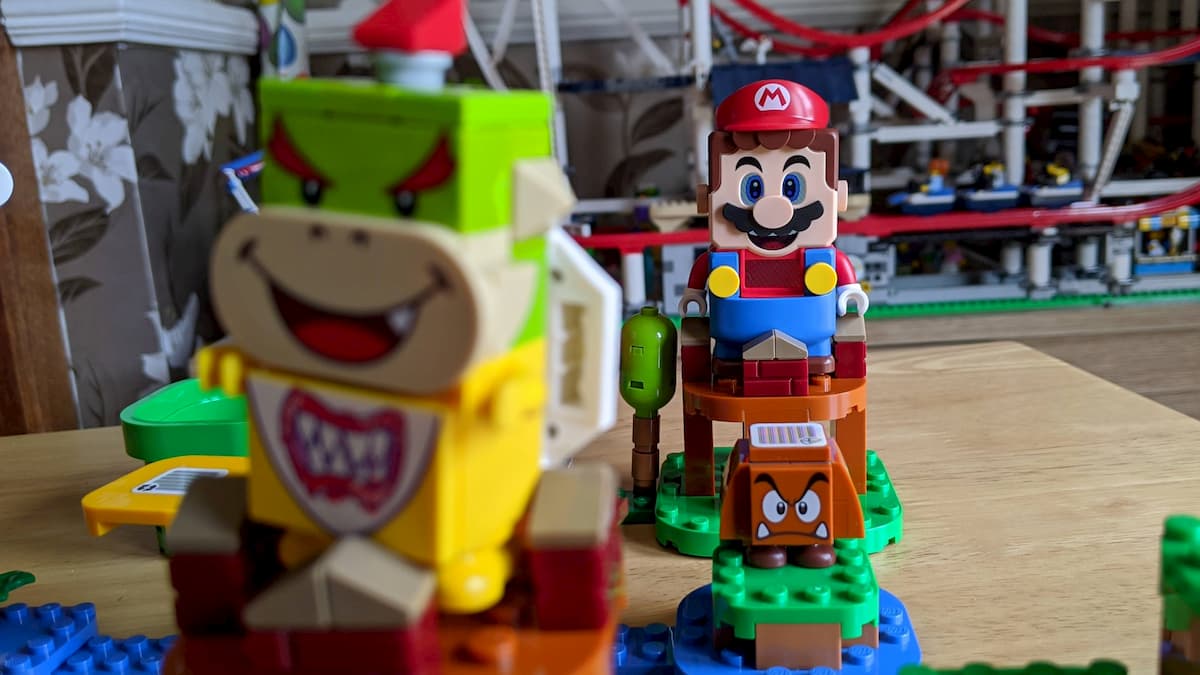 But in terms of this set itself? Annoyingly, you get more value out of the LEGO Super Mario range the more money you spend. Which is a little backwards. With over £500 worth of sets in the range altogether, we don’t anticipate many people to buy everything. But if you have a few sets, you’ll get way more enjoyment out of it than you would with just the Starter Course.

Ultimately, if you’re solely a LEGO builder, and want sets for no other reason than to put together and display, you won’t get good value here. But if you’re a Mario fan, enjoy seeing LEGO do something a bit different, and want something you can play with, then it’s unlikely you’ll regret making a purchase.

This article first appeared on That Brick Site

A LEGO Star Wars Holiday Special is Coming to Disney+ 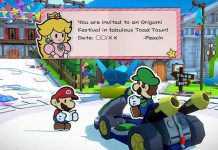