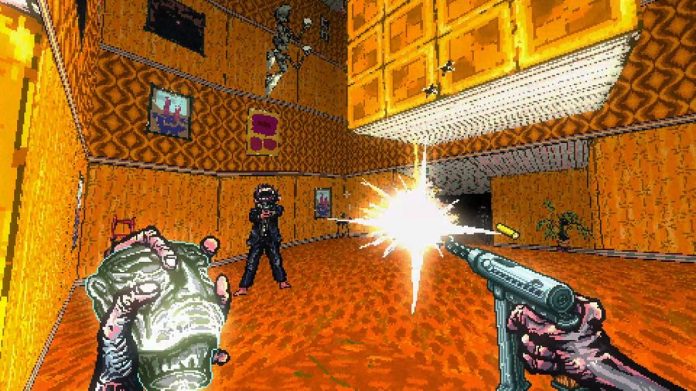 Post Void casts you as a rage-filled milkman who, having had his milk cart plundered by a gang of hoodlums, sets out to retrieve his produce.

At least, I think that’s what Post Void is about. There may be another explanation as to why your protagonist is pouring people’s creamy leavings into an empty Crystal Skull Vodka bottle, but it doesn’t matter; you’ll be too busy shooting enemies in the face to dwell on any plot points.

The liquid you collect isn’t just for show; it’s your lifeblood and it ticks away, even if you’re not being blasted by a Chain Chomp in a business suit. Moreso than DOOM, even, momentum is the key; spurred on by  a ridiculously rocking soundtrack, you dash through each level before your special white fluid can run out. Fail, and it’s right back to the beginning of the game.

Yes, it’s permadeath time, but you’ll be back. Several times I ALT-F4ed the game, only to immediately fire it up again, determined to beat my personal best. Post Void’s utterly hatstand art-style adds to its appeal, even though you don’t have time to gawp, and it sports foes that would give H.R. Giger a run for his money.

Headshotting them isn’t just hugely satisfying, it’s an essential part of Post Void, as is sliding around like a madman. Sure, you can, theoretically, just blast your way through the game, but half the fun is slaughtering your enemies in style. It’s a shame there’s no third person camera since since some of the shooty shenanigans you get up to are pure John Wick. 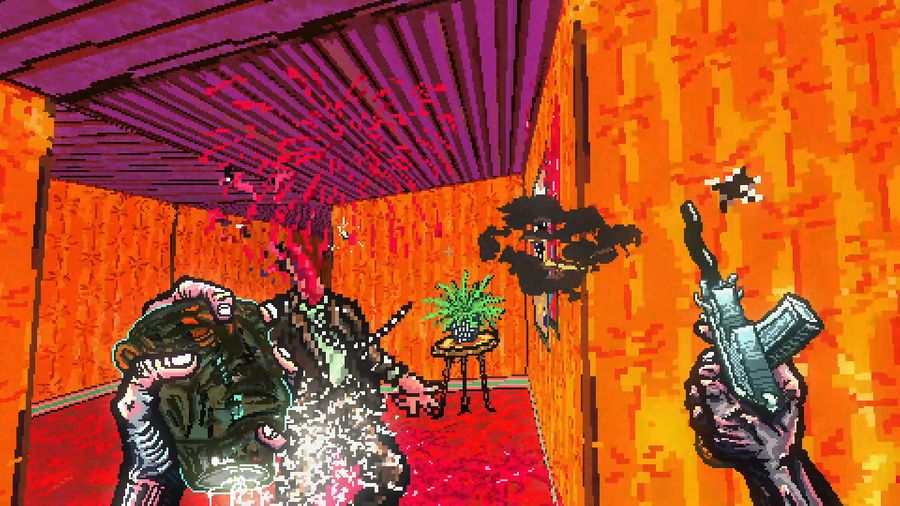 That said, there was a time when I felt a bit like I was cheating. Reach the end of a level, leap into the milky pool and you’ll be presented with a choice of upgrades. You can slow down enemy bullets, move faster backwards, wield a Uzi and so forth. I grinned a mile wide when Post Void offered me a shotgun, but two levels later, I was mowing down enemies so effectively, I almost regretted my choice. Almost.

But there’s precious little else wrong with Post Void; it’s such an an absurd, adrenaline-pumping rush that, no matter how miffed you are at losing, you’ll be straight back in the saddle. And, for less than the price of a pint, what have you got to lose?

Eye-Melting FPS Post Void is Coming to PlayStation This Spring