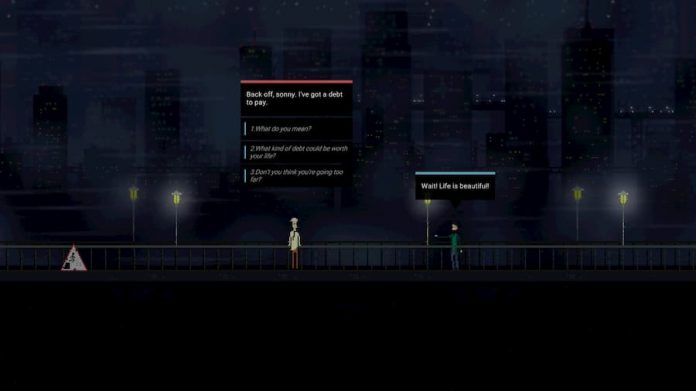 Suicide is a complicated topic to talk about.

Not because it’s rare – in fact suicide is one of the most common causes of death all over the world – but because no-one really knows why people kill themselves. Was it pressure from someone else, encouraging them to end it all in one final moment of desperation? Was it psychological; an itch in the back of someone’s mind egging them on? It’s impossible to say because when someone is gone, we can’t speak to them anymore or try to find a way to understand them.

Wait! Life is Beautiful! is a psychological thriller from developer [DRAMATIC MUSIC PLAYS] that tells the story of a man who stands on an infamous suicide bridge every night, trying to keep people from taking their final leap into the unknown. It’s a difficult topic and one that not everyone will be able to stomach; but those that do will find it’s about more than just a suicide bridge. It’s also about the main character and the trauma that comes from seeing people jump every night and not being able to help them.

In the game you play as Will who takes his post every night on the suicide bridge, but he didn’t always do this. At first, Will was at a dead-end job. After a while, the job got to him and he couldn’t take it anymore. That’s when he ended up on the bridge and realised that he might be able to help people; perhaps talk them out of something they’d regret. Choose the right words (or the wrong ones) and you could change someone’s life. 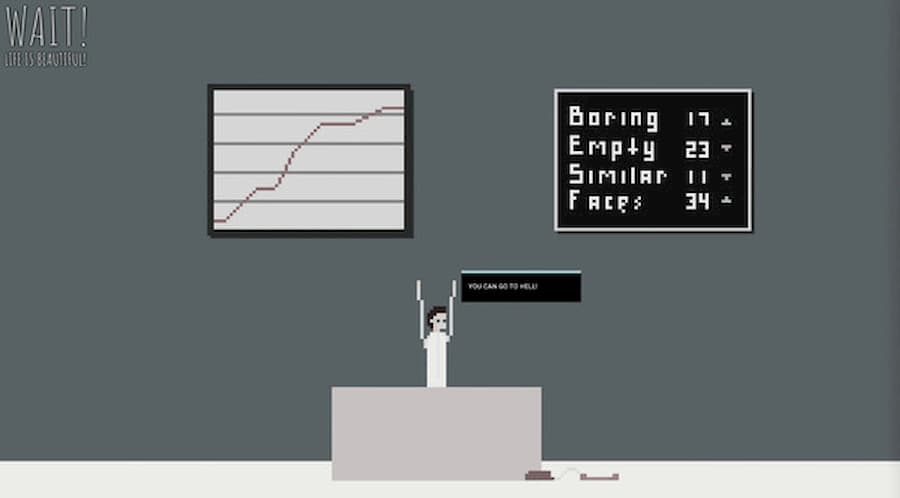 But Wait! Life is Beautiful! is more complicated than that. After a of couple in-game nights, you’ll start hearing about “The Leader.” Some of the bridge jumpers will tell you that The Leader told them that jumping was their destiny. It’s a way to get out of their bad life. It’s only when you meet The Leader yourself that you realise he’s a bit like a cult leader. He self-proclaims that he is “Pro-Death” and wants you to join him as one of his “followers”; rather than trying to save people on the bridge, he wants you to encourage them “to follow their destiny”. It’s up to you to decide for Will what choice he’ll make, and whatever you decide will change the story drastically.

You’ll also meet other characters along the way; like a young woman who recites Shakespeare and encourages you to blow up the bridge as a way to discourage people from jumping. You’ll also deal with the police, who find it incredibly suspicious that every time someone jumps off the bridge, you’re there to tell them what happened. Things get more complex as time goes on, and all of the choices that you make can lead to one of a few different endings. 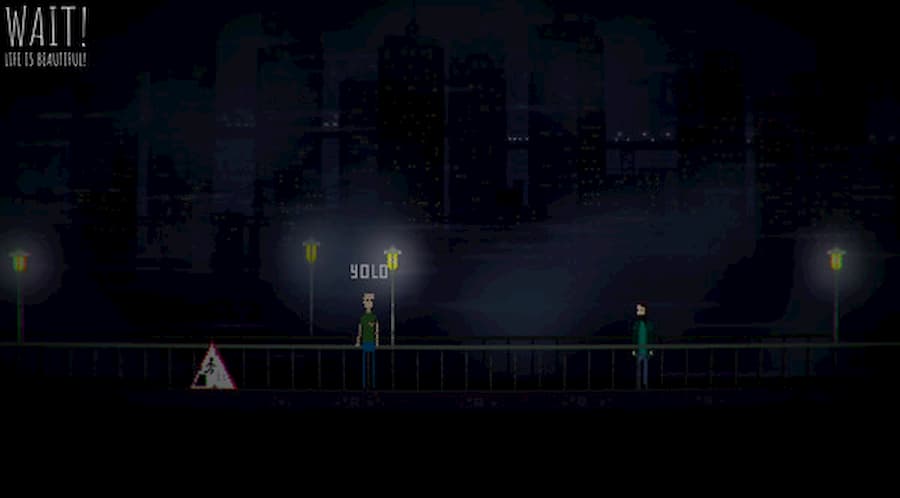 The subject matter dealt with in Wait! Life is Beautiful! may be dark, but it does so in a simple and meaningful way. Its stark, pixelated art style is lovely to look at, despite the gravity of some of the scenes it depicts. The creator of the game themselves state that Wait! Life is Beautiful isn’t meant to contain a life-changing message, but is instead meant to encourage players to pay closer attention to their loved ones and think about the effects of suicide on those around us.

Wait! Life is Beautiful is an interesting title that does what it sets out to do. It makes the player think and gives them time to reflect on such a powerful topic. It isn’t for the faint of heart as it does portray suicidal thoughts and actions, so be aware of that before you give it a try.

Wait! Life is Beautiful! is available now on Steam.