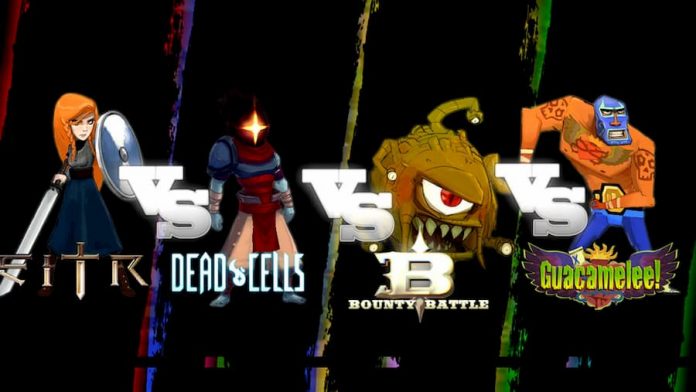 Have you ever wanted to see Juan from Guacamelee beat up Owl Boy?

Probably not. In fact, Owl Boy doesn’t deserve to have anyone beat him up. He’s adorable. But if you do happen to have an interest in that, you can do so in the new 2D fighter titled Bounty Battle. Not only that, but you can jump into the shoes of over 30 characters from your favourite indie titles like SteamWorld Dig, Jotun, Axiom Verge and more. In this case though, just because you can, doesn’t mean you should.

In the game, vortexes have begun mysteriously popping up all across the multiverse. These vortexes decided to choose the most powerful warriors from each of the worlds to compete against one another to fight for ultimate control. They even gave these champions their own set of special abilities to help them along the way. Each world wants to win the ultimate prize and thus they have collided together in battle.

There are two main ways to play Bounty Battle – single player and couch co-op. Co-op plays a lot like Super Smash Bros. where each person chooses a character and you can pick all of the rules of the game (how many lives, if the game has a timer, etc.). Then you simply button mash your way to victory. Single player mode has a few more options than that. In Tournament mode, players must complete tasks, such as beating a specific character, or destroying all enemies in the level. Completing these challenges without dying unlocks new outfits for the characters. Additionally, there’s a challenge mode where you pick one character and continue to fight different characters until you die. For players just starting out there’s also a tutorial and training mode to help you learn how to play.

At first glance, Bounty Battle seems alright. I enjoyed being able to revisit its myriad of much-loved characters, some of which I hadn’t seen in years. Unfortunately, players will very quickly realise that these characters might’ve been better left alone. When it comes to the way that the characters look, some are better than others. The Penitent One from Blasphemous, for example, looks absolutely beautiful. Other characters, like the Shield Maiden or the main character from Axiom Verge, leave something to be desired. 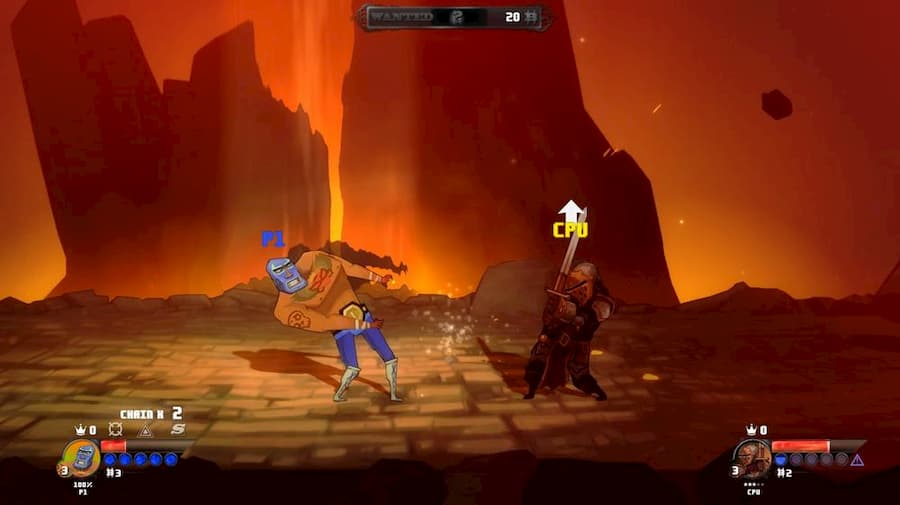 Each character has their own set of combos that they can perform. You’ve a couple of standard attacks as well as a grab attack that more often than not just won’t work. Each character also has a summonable minion that helps them fight in battle. Juan from Guacamelee, for example, spawns in a bunch of chickens, but again this move seems to do very little to help you in the heat of battle. While each character has their own minion, the moves are basically the same. Once you’ve mastered how to play one character, you can pretty much play them all.

That’s true as well for the character’s weight classes. In Super Smash Bros., which is hard not to compare Bounty Battle to, you’ve got characters like Bowser or Donkey Kong who would count as “heavy characters.” I’m not fat shaming Bowser, but you can feel how heavy he is when you play as him. He can’t jump as high, and he’s slower to move. Every character in Bounty Battle feels exactly the same, regardless of their size. Add in a few unique minions and you’ve got yourself a brawler where all the characters feel and play the same and just have the faces of some of your favourite indie characters.

These aren’t even the worst issues with Bounty Battle. For my first few rounds I played in versus single player to get used to how the game plays – and it seemed to run fine. The characters are a bit clunky, but for the most part I could move each of them back and forth across the level easily. It was only when I decided to try against three computer players that the game start slowing down. Doing any kind of move causes the characters to freeze or move in slow motion. Any time something more than just throwing punches happens on the screen, it’s difficult to even see what’s happening. And the more rounds I played, the more I realised that these issues don’t just happen on four-player rounds; they happen occasionally no matter how many characters were fighting.

It’s also incredibly easy to trap someone on one side of the map. And once you’ve got them trapped, the recovery animation takes such a long time that it becomes impossible for them to stand up before you’re knocking them down again. The AI is incredibly easy, even when they’re turned up to the highest difficulty. And on levels where there are platforms to jump up to, the AI sometimes has a hard time jumping up to be able to attack. 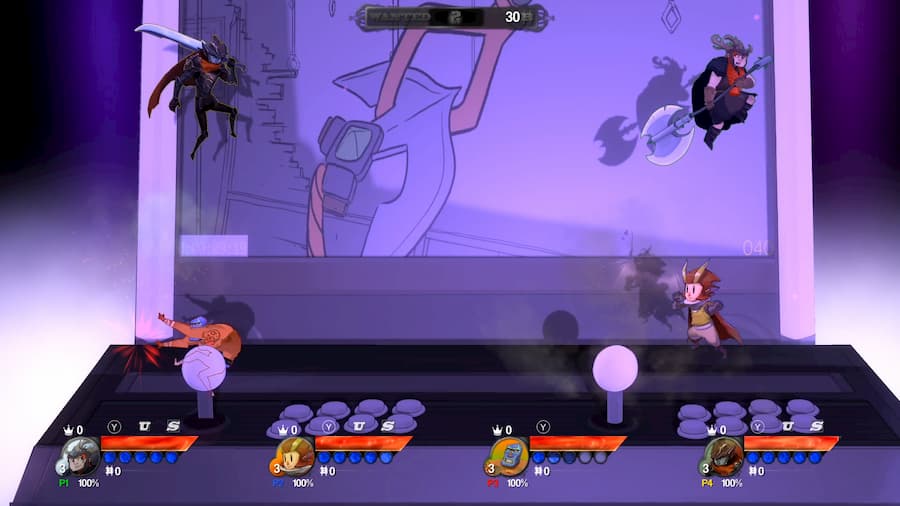 In regards to the different game maps, a lot of them are lacklustre. Many are simply boring and flat; even some of the levels themed around a specific indie game fail to impress. Look, I’m really struggling to find something positive to say about Bounty Battle, alright? Maybe the game’s intro video is the only highlight; it’s well animated and highlights many of the playable characters.

Bounty Battle is a disappointment through and through. On paper, its concept is fantastic; many players will be tricked into picking up the game so they can see their favourite indie characters in action. But in reality, it’s a mess that will only serve to disappoint. From poor performance, lacklustre level design and lack of weight to the characters, there really are too many issues to mention. It might be nice to see some of those beloved characters again, but that’s all that Bounty Battle has going for it.

Bounty Battle is available on PC, PS4, Xbox One and Switch. We reviewed the game on PS4 with a code provided by the publisher.