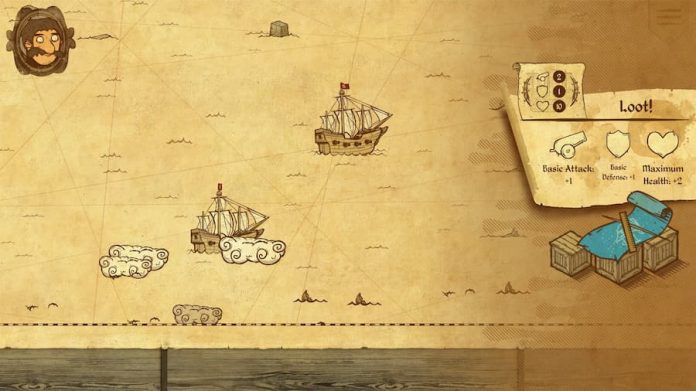 Sea monsters aren’t the only ones that can have a little fun out at sea.

Out now on Nintendo Switch, Here Be Dragons is a humorous turn-based strategy game that has players adventuring on a ‘living map’. You’re in charge of leading a group of captains across the open ocean while defeating monsters and helping Christopher Columbus on his way to the new world.

Here Be Dragons might not be the historical retelling of Christopher Columbus’s trip to the new world; but as an American, I’ve heard the story enough times to be happy to hear it told another way. What about the huge sea monsters they found along the way? The Leviathan, the Kraken; they had to have fought them off before they forcefully colonised the Native Americans. Right?

This strategy title gives players the chance to see how that story might have gone. You use the game’s ‘Dice Activation System’ to attack, heal your team and upgrade. And along the way you’ll enjoy a few jokes with your crew.

The game has had quite a successful run since its PC release last year, receiving “mostly positive” reviews on Steam. We already reviewed the game earlier this year, awarding it a solid 7/10. The game is wacky, fun and has just the right amount of strategy for fans of the genre.

If you want to jump into Here Be Dragons for the first time, it’s now available on Switch. You can pick up the game right now on the eShop on sale right now for $12.59, normally $17.99.