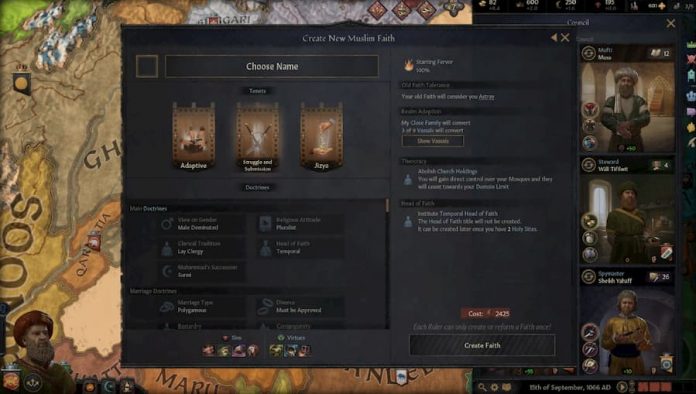 Anyone can create their own religion in Crusader Kings III but it will cost you a lot of piety to do so.

To create your own religion in Crusader Kings III, click on the religion icon at the bottom left-hand corner of the screen. That will bring up the religion tab, with the option to create new faith. This will be of your current religious tree – e.g. Christians will make a new Christian faith.

You will be able to choose a name, change the faith’s icon, its three main tenets and its doctrines. What you choose for the doctrines can drastically alter the gameplay in your region.

The piety cost is dependent on the tenets and doctrines you choose. Things that are more familiar to your current religion will cost less, and there are other inherent costs too. How far your new faith deviates from the previous one also determines how others following the old religion will react to you.

Your new religion in Crusader Kings III will determine which traits are sins and which are virtues, as well as what actions are illegal in a realm that abides by it.