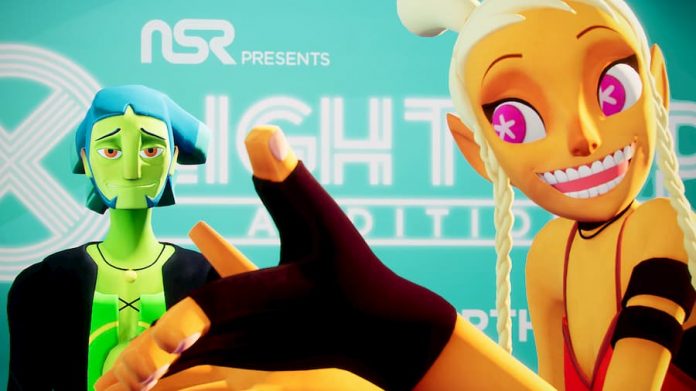 Things get off to a good start with the introduction of band members Mayday and Zuke, collectively known as Bunk Bed Junction. They’ve signed up to the latest Lights Up audition, hoping to make the people of Vinyl City rediscover their love of rock music – all they seem to care about these days is EDM. But things don’t go exactly how they planned. They perform well and the crowd seems to love them, yet they’re turned down. Angry and disheartened they head home, cursing No Straight Roads, the company that currently seems to control Vinyl City. Then a power cut occurs, and it suddenly dawns on Mayday and Zuke that NSR needs to be taken down.

Mayday and Zuke are the protagonists of musical adventure No Straight Roads, developed by Metronomik and published by Sold Out. Mayday is extroverted, over-the-top and very animated, while Zuke is quiet and generally reserved. One is Ying and the other is Yang, so they complement each other very well. And so, thanks to their brilliant characterisation and well-delivered voice-acting, you instantly feel an attachment to them. No Straight Roads‘ intro also does a fantastic job of setting the game up; by the time its title card shows up, you’re raring to go. And initially, things do seem good.

No Straight Roads‘ tutorial-laden intro gets you up to speed with the duo’s basic abilities. Mayday strikes with her guitar, doing heavy damage with her laboured swings, while Zuke taps enemies with his drumsticks, doing less damage but hitting much faster. Ranged attacks are also available; musical notes can be collected then fired at your enemies, doing damage from afar, while objects in the environment can often be transformed into a rocket or a gun emplacement thanks to the power of music. When it comes to defence, you can either dodge out of the way of enemy attacks or even parry some of them. And eventually you gain access to a range of special abilities, too. 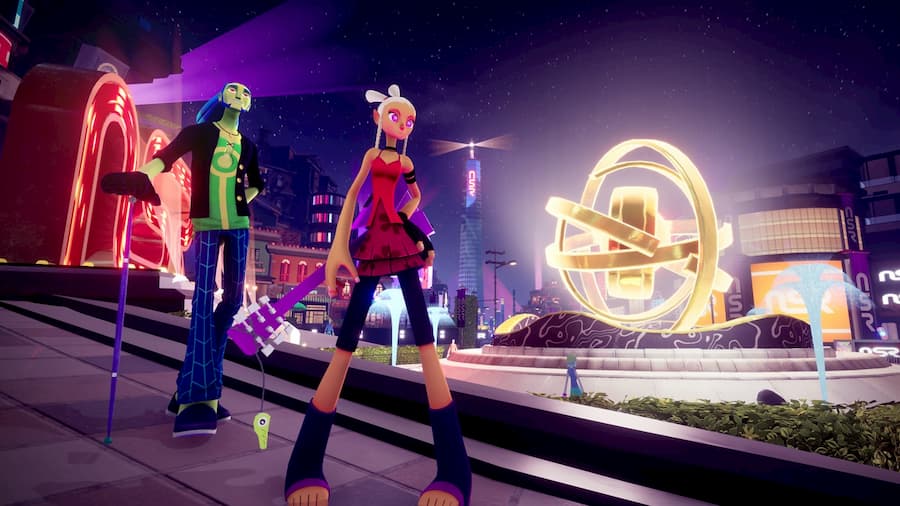 The twist to No Straight Roads’ gameplay is that its pays to play along to the music. Enemy attacks are closely linked to the beat, so you need to get in the groove to anticipate them, then move in when it’s safe to lay on some of your own pain. There are four basic enemy types: one jumps or pounds the floor with their fists, releasing destructive waves that need to be jumped over; another is air bound, spewing projectile attacks that need to be dodged; the third also fires projectiles but is ground-based, lashing out with a kick when you get too close; and the last is basically a cylinder that follows you around while sprouting bars.

After the intro, it’s a while before you face No Straight Roads‘ lesser enemies though. Your first task is to hijack a show being put on by DJ Subatomic Supernova, one of NSR’s cronies, and so you’re hastily thrown into your first boss fight, which is also quite possibly the best in the game. A challenging multi-stage affair, you’ll need to put the skills you’ve learned in the game’s tutorial-laden intro into action. Chances are it might take a death or two until you’ve figured out exactly what you’ve got to do in each phase, as well as how to avoid the boss’ attacks. But once he’s down you’ll be elated, and also probably looking forward to what’s ahead. 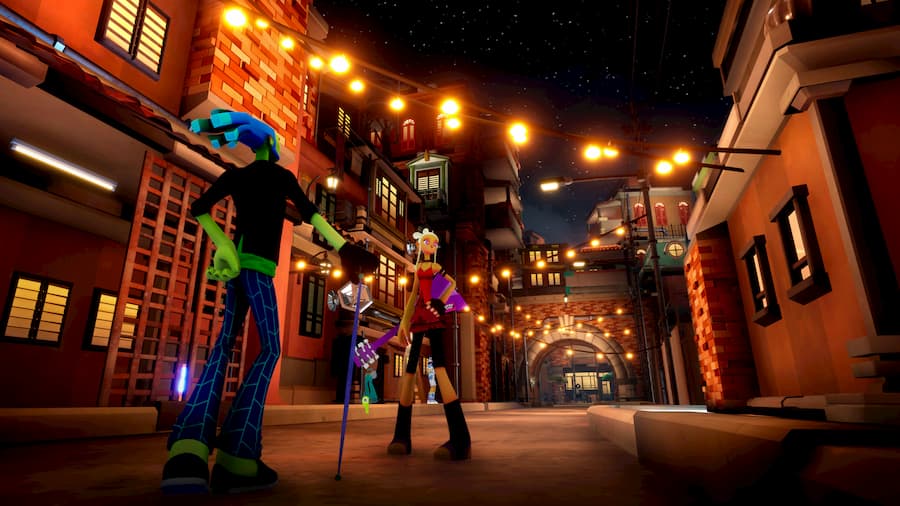 The problem is, it’s all downhill from there. After beating the first boss you’re introduced to your sewer hideout, which steadily gains increased functionality over the course of the game. Initially you can only place collectibles and play an arcade game, for example, but then it quickly becomes the place where you receive mission briefings and customise Mayday and Zuke’s abilities with stickers and mods. Eventually, it’s even home to a radio station where you can take part in interviews, and a gig area that allows you to buy new abilities from skill trees thanks to the power of your fans.

Emerge from the sewer and you’re able to explore Vinyl City, and you’ll need to to reach the next member of the NSR that you need to take town. But it feels like filler, really. All there is to do is collect batteries so you can power up various devices to gain a small boost to your fans, observe various items, and talk to strangers. It’s dull as dishwater. And while you were able to simply waltz up to the first boss and take him on, to get to the others, you have to overcome repetitive platforming sections that feel like they’re there to simply pad the game’s running time out.

You go from one small area to the next, dealing with the four basic enemy types as best you can. Sometimes it’s hard to keep track of everything that’s going on; occasionally No Straight Roads is simply too busy for its own good, especially during boss fights. To make matters worse, it’s not all that impressive mechanically; combat feels a bit stiff, and you don’t feel like you have much control when jumping. And then there are the bugs – from certain story scenes not displaying right, to Mayday and Zuke moving back and forth on the screen at times as the game struggles to place them, No Straight Roads has more than its fair share of technical issues. Not being able to manually move the camera can also be irritating. 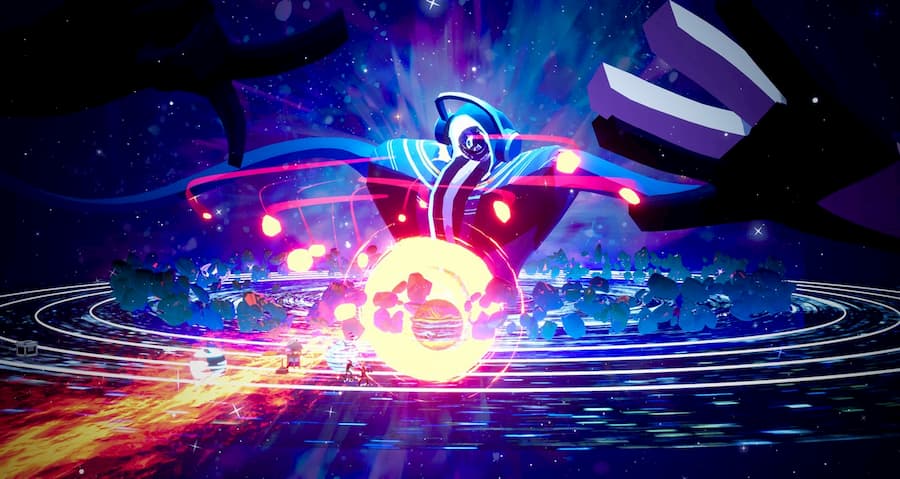 As you make your way through No Straight Roads‘ short story, there will be times where you’re absolutely enraptured by it. Some of its music tracks and boss battles are indeed great, but there are just as many gameplay imperfections that will make you want to turn it off in frustration and never return to it again. Those who do persist, however, will find additional difficulty modes to tackle, and it’ll take some skill to fully unlock all of the abilities available via the skill trees. You can also play the game in local co-op if you wish.

There’s a lot to like about No Straight Roads, there really is. But ultimately, its gameplay is disappointing. It’s essentially a boss rush game that’s been stretched thin by repetitive platforming sections and a hub that’s just a mindless collectathon. The boss battles themselves are of varying quality too, and are laden with frustration. With a patch or two No Straight Roads could be a decent game, but as it stands it’s impossible to recommend to even those who are really into music-infused adventures.

No Straight Roads is available on PS4, Xbox One, Switch and PC. We reviewed it on Xbox One X with a code provided by the game’s publisher.

Buy No Straight Roads on Amazon

No Straight Roads Gets a New Switch Gameplay Trailer