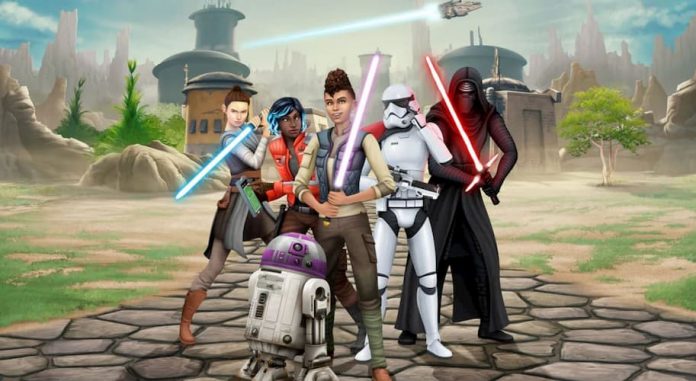 Bet you never thought you’d see the worlds of The Sims and Star Wars collide, eh?

But that’s exactly what happens in The Sims 4: Journey to Batuu, the franchise’s newest Game Pack. In it, your Sims can vacation in Batuu, a territory on the edge of the Star Wars galaxy. It’s also the location of the real-life Star Wars theme park, Galaxy’s Edge.

But rather than simply visit and gawp at the attractions, your Sim can absorb themselves in the Star Wars universe. From dressing up like a true galactic civilian, to doing the Kessel Run, having a Lightsaber duel, or even choosing an alliance with the First Order or the Resistance, the full Star Wars experience is here for your Sim’s taking. Just about.

Batuu truly is a sight to behold; you can tell a lot of care has gone into making it. From the Millennium Falcon’s every last detail to the outfits and the bar in the Cantina, spending time in Journey to Batuu feels like an authentic Star Wars experience. The excellent soundtrack helps; you’ll hear plenty of licensed Star Wars music as you play, and it’s perfect in engrossing you in the world.

Being a Game Pack, The Sims 4: Journey to Batuu packs in tonnes of missions for you to complete. There are questgivers dotted all around Batuu, each with an alliance to either the Resistance, the First Order or the Scoundrels. Choose your missions carefully; completing them will raise your alliance with that faction. You don’t want to end up accidentally on the Dark Side now, do you? 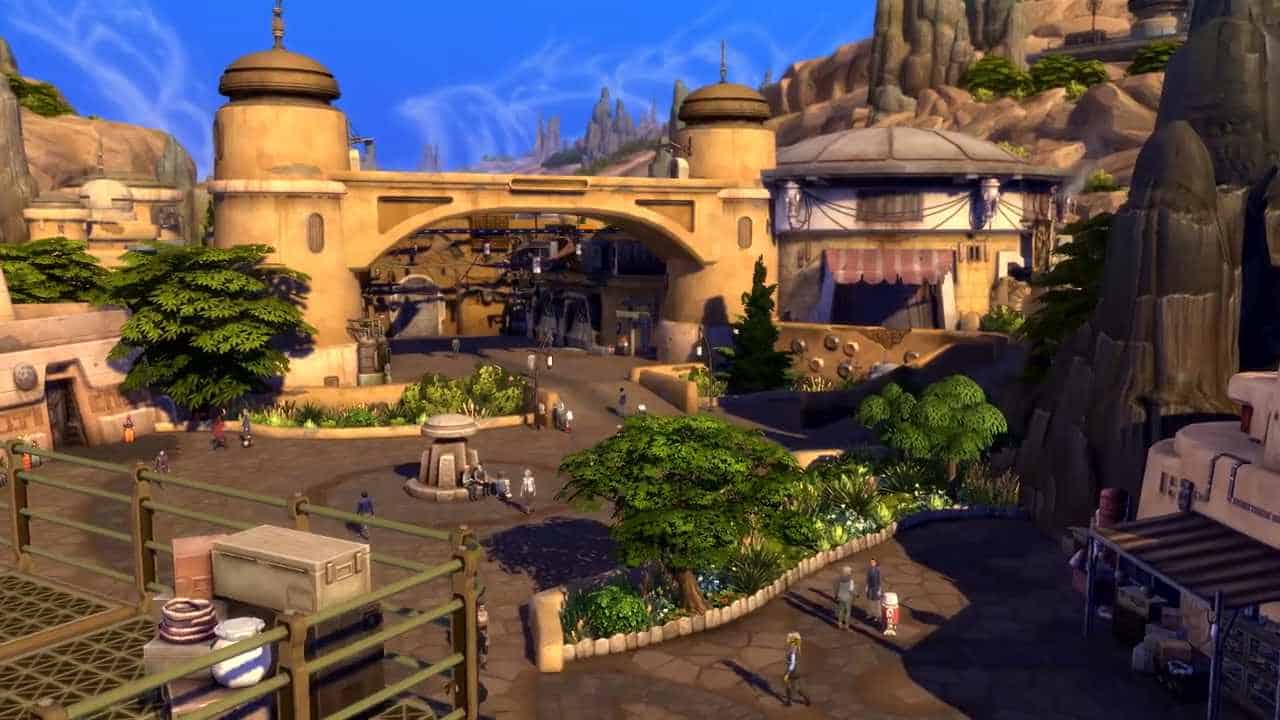 Exploring Batuu is a joy, but it feels rather limited. You can’t look inside your sleeping quarters, for example, and outside of the Cantina – which is simply a delight – you can’t look inside any of the other buildings. Go to buy a Lightsaber, or grab a snack at any one of the food outlets, and your Sim will simply disappear into an empty building. It’s a shame there’s not more to poke around in, because what is there has been beautifully designed.

The missions are fun at first, though do get a little repetitive. You’ll find yourself constantly hacking panels, bribing information out of people, and to-ing and fro-ing on basic fetch quests. You have to perform a lot of them to get your allegiance up with a faction, too. And annoyingly, certain activities are locked out until you’ve reached a certain level. You can’t explore the Millennium Falcon until you’re at max level with the Scoundrel faction, for instance. 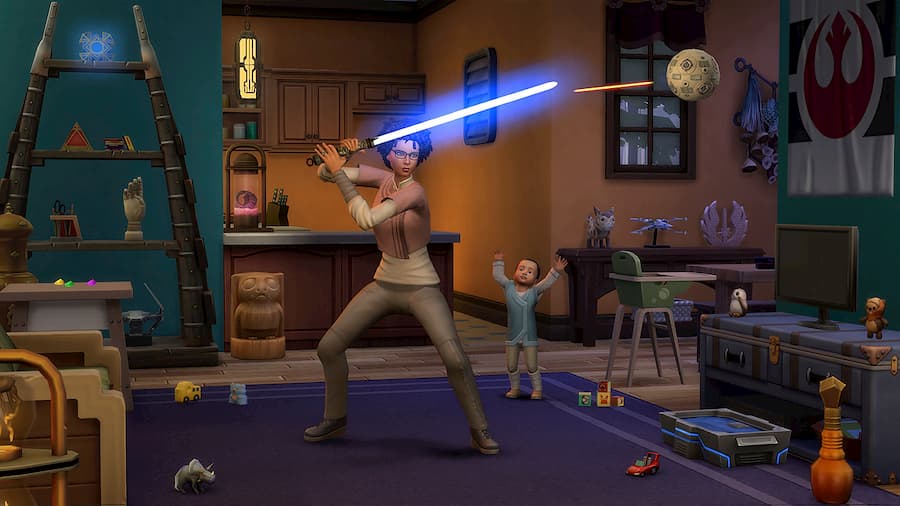 The good thing is that completing missions will earn your Sims transferable skills to be used elsewhere in the game. Hacking panels to retrieve sensitive data for the Resistance will improve your technology skills in general, for instance. And even eating weird and wonderful Star Wars cuisine means your Sim will eventually learn that recipe for themselves.

But even if you don’t want to get bogged down in missions, simply spending time in Batuu is a pleasure. Sure, a lot of the world feels strangely empty, but hanging out at the Cantina will likely become your new favourite social spot. You can dance, chat, flirt, play games, eat and drink in one location; nowhere in San Myshuno or any other Sims 4 location comes close. You might lose your job as a result of your extended vacation, but you can completely forget about the stress of day-to-day Sim life while you’re there; Batuu has its own currency, and you’ll have a separate inventory to store your bits and pieces.

You’ll amass plenty of new items from Journey to Batuu. Key, of course, is a lightsaber. Once you have one on your person, you can challenge other Sims to a duel – which is a blast to see. Of course, you can’t actually control the duel, but seeing your Sim go toe-to-toe with another is enough to put a silly grin on your face. The same too when it comes to buying your very own droid; it wouldn’t be Star Wars without a robot companion. 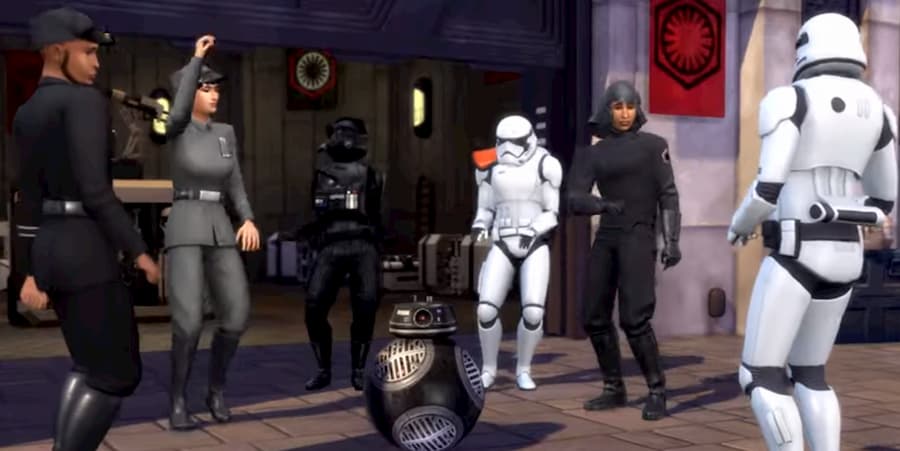 Back in the regular Sims 4 world, Journey to Batuu adds a tonne of cosmetic items and furniture. You needn’t leave the galaxy behind just because you’re back on Earth. There’s enough to recreate your very own Cantina if you wish; regular furniture has never looked so dull in comparison.

Journey to Batuu is by far one of the most interesting expansions to come to The Sims 4; if you’re a Star Wars fan, it’s worth paying a visit to just for the fantastic atmosphere. It’s a shame there isn’t more of Batuu to see, and it would have been better if the available missions were a bit more varied and involved – but it’s still a delightful world to get lost in, and one we’ll be coming back to regularly.

The Sims 4: Journey to Batuu is available on PC, PS4 and Xbox One. It requires The Sims 4 base game to play. We reviewed the game on Xbox One X with a code provided by the publisher. 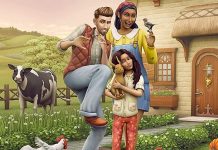