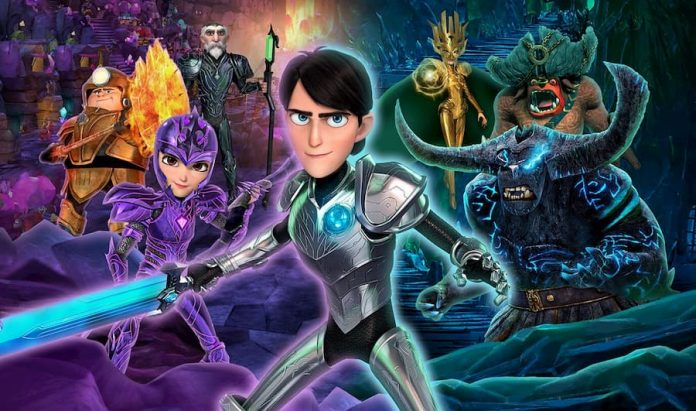 The popular world of Trollhunters is now available in videogame form.

Trollhunters: Defenders of Arcadia casts you as the series’ hero, Jim Lake Jr. as he sets out on a brand new adventure. It’s up to him to save the day, this time from a time-bending threat led by trickster troll Porgon and the evil Morgana. For Jim, though, it’s just another day.

You don’t need to be familiar with the Trollhunters series to be able to enjoy Trollhunters: Defenders of Arcadia, but it helps. Key characters are voiced by their original actors, which is a nice touch. But gone is Dreamworks’ beautiful 3D animation, replaced with a rather ugly 2.5D world. It’s not the prettiest game to look at by any means, which is in stark contrast to the series its based on. In-game character models are rather basic; when in dialogue, they’re represented by 2D portraits. They’re less ugly, but still a far cry from the glossiness of the Netflix series.

But actually playing Trollhunters: Defenders of Arcadia is enjoyable enough. It’s a level-based platform adventure and, in control of Jim, you’ll run, jump and fight your way through various environments. There are hidden collectibles to find along the way, coins to pick up which can be used to buy items, and plenty of enemies to lay waste to.

Platforming is solid; jumping feels accurate enough and movement is responsive. And in order to reach certain areas, you’ll have to make use of skills, which you’ll unlock as you play. Your friends and acquaintances can be called in to help out; Angor Rot, for example, can create a platform to help you reach higher ledges, and Toby can cannonball through blocks to clear a new path. Jim himself will unlock new abilities over time, too, such as a powerful dash strike, and a glide jump. 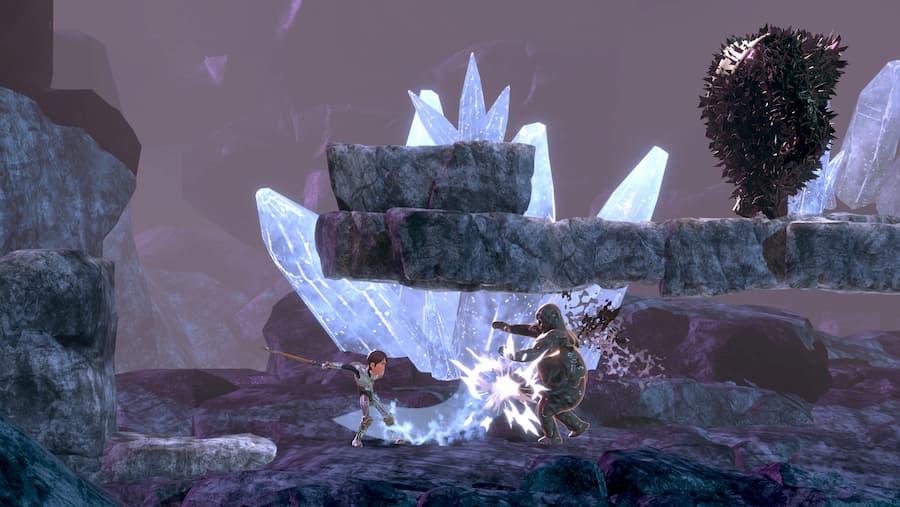 Combat, however, leaves quite a lot to be desired. Jim has one melee attack – a swing of his sword – and a rather useless ranged attack. Eventually, once his dash strike ability is unlocked, that can be used against enemies, but for the most part you’ll be wildly hitting ‘attack’ to swing your sword. It’s not particularly fun, especially against hardier enemies in later levels. Jim has no real dodge or defence manoeuvre, so avoiding taking damage feels like a game of chance.

Couple this with the fact that some enemy designs barely stand out against the environment, and you’ve got a recipe for frustration. Small imp-like creatures will charge at you, but they’re so slight and light-coloured that they’re easy to miss against busy backdrops. Numerous times I’ve been completely oblivious to the fact they’re running right at me simply because they’re just not that easy to see. Big enemies are much more visible, of course, but their powerful attacks do much greater damage and they’re much harder to dodge. 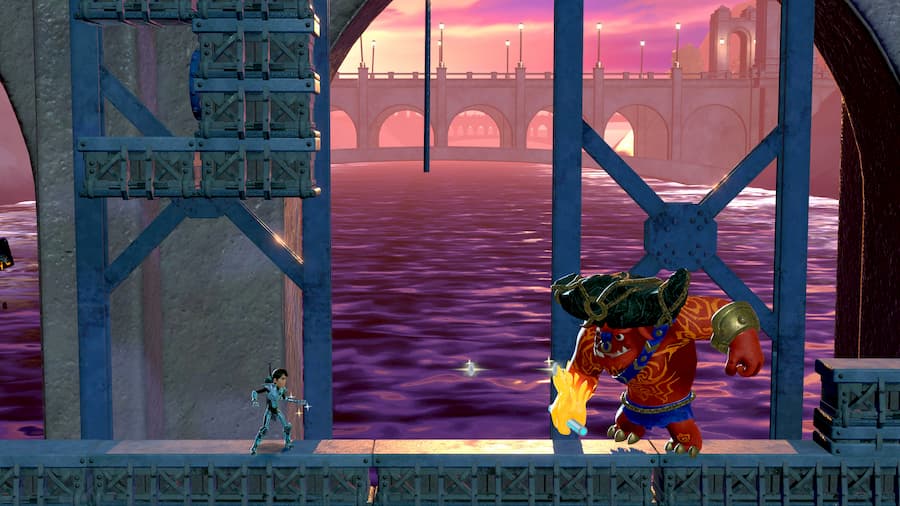 Still, the range of environments on offer make for some entertaining platforming. The collectibles in each level – a number of odd socks to find, and pesky gnomes to catch – gives reason to go back to previous levels and aim for completion. Perhaps the most enjoyable part of Trollhunters: Defenders of Arcadia, though, is its hub world, Trollmarket. Not only is it perhaps the nicest looking part of the game, but you’ll meet an array of NPCs to talk to, many of whom will offer you side quests at various parts of your adventure. These might simply be track down item X, or replay level Y to talk to character Z. But it breaks up the otherwise repetitive gameplay, giving you a few extra tasks to focus on. Trollmarket also allows for opportunities to spend coins on armour and skill upgrades and items.

Being developed by WayForward, I had high hopes for Trollhunters: Defenders of Arcadia. It’s the team that develops the Shantae series, along with numerous other highly-regarded side-scrolling platformers. But Trollhunters lacks the polish and finesse of Shantae. Like the majority of TV or movie tie-in games, it ultimately feels a bit soulless and hollow.

As far as platform games go, there are much better titles out there than Trollhunters: Defenders of Arcadia. It’s let down by uninspired visuals, and a combat system that just isn’t fun. If you’re a fan of the Dreamworks series, then you might get a bit more joy out of it, but for everyone else it’s a rather humdrum platformer. It works, but that’s about it.

Trollhunters: Defenders of Arcadia is available on PC, PS4, Xbox One and Switch. We reviewed the game on Xbox One X with a code provided by the publisher. 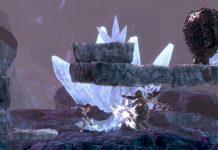 How to Call in Assistance in Trollhunters: Defenders of Arcadia 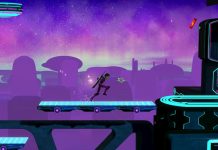 How to Slide in Trollhunters: Defenders of Arcadia