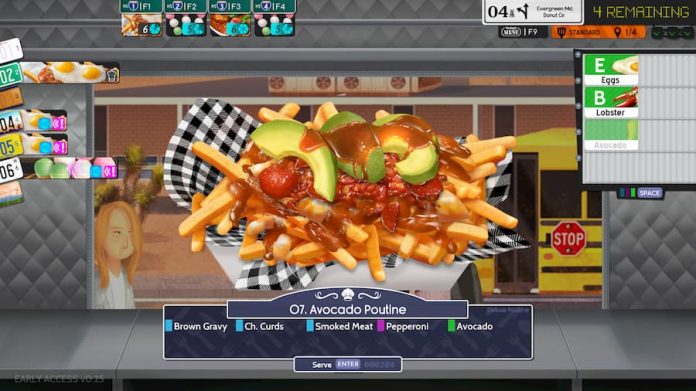 Delicious doesn’t even begin to describe all of these amazing foods.

I’m always hungry as it is, but playing games that involve food makes me want to eat anything I come in contact with. Okay, maybe not anything, but if you put food in front of me after playing Cook, Serve, Delicious 3 I’m going to eat it. The third iteration in this series from Vertigo Gaming Inc. puts players back into the shoes of the Cook, Serve, Delicious Chef. This time around, there are new features, new characters, new foods and more.

The story of Cook, Serve, Delicious 3 begins with a tragedy. Based in war-torn 2042 America, the Cook, Serve, Delicious tower has just been destroyed. And with its destruction almost comes the demise of the chef (aka you). When friendly robots Whisk and Cleaver pull him out of the wreckage, the team (mostly Whisk) decide they should take to the road, bringing chef’s delicious food all across America with the ultimate goal of competing in the Iron Cook Foodtruck Championship.

Cook, Serve, Delicious 3 feels hugely different from its two predecessors. While the first game was stressful, its difficulty level was manageable. The second title only ramped up the difficulty and now, Cook, Serve, Delicious 3 challenges the greatest, most adaptable of chefs. The game is described as “casual” on its Steam page which actually made me obnoxiously laugh out loud because it is anything but. It is fast-paced, brutal and a roaring good time.

If you haven’t played a Cook, Serve, Delicious title before you probably shouldn’t start with the third one – but the gameplay is simple enough to pick up. At the beginning of your day you choose the food items that you’d like to include on your menu. There are usually certain rules you have to fulfil, so you won’t be able to just choose your favourite foods. Each food has a point value associated to it, and the higher the number the more difficult the food is to cook. Some days you may have to have a menu with foods that have at least 9 points cumulatively or you simply have to choose at least six foods. 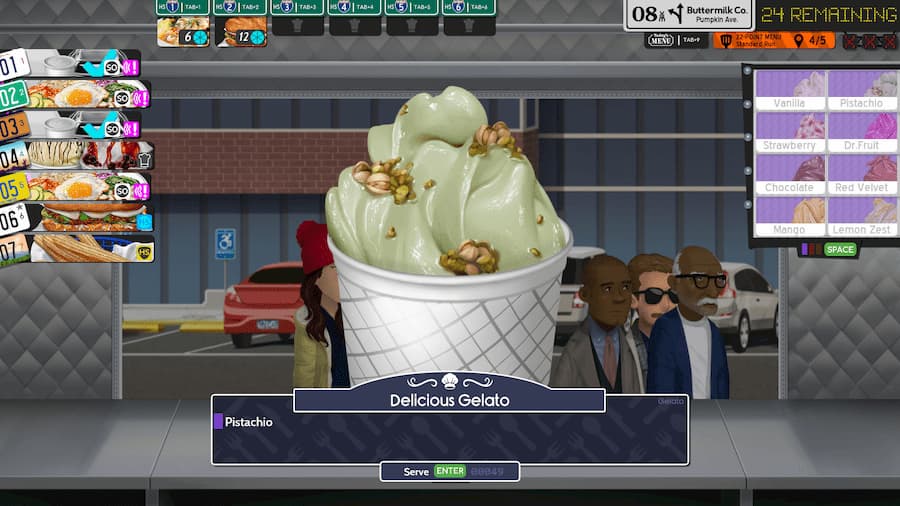 After you choose your menu, you jump into your food truck and can immediately start working on any foods that require preparation. For example, most fried foods must be placed inside of baskets and lowered into oil before being served. On the left side of your screen your orders will come in, telling you what the customer wants. When you begin cooking the item all of the ingredients that can go into the meal are shown and correspond to a letter on your keyboard (or a button on a controller if you’re playing on console). As an example, sopapillas must be fried then served with powdered sugar and honey. You’ll prepare the item ahead of time, bring it up when it is ordered, press “S” on the keyboard for sugar and “H” for honey and then serve it.

While Cook, Serve, Delicious 3 is easy enough to pick up, mastering the game is a whole different frying pan, so to speak. You see, you won’t just have one customer coming in at a time. In the first Cook, Serve, Delicious you have folks coming in slowly with one or two rush hours where things got a bit more fast-paced. But in Cook, Serve Delicious 3, there are very few orders that come in while you’re moving on the road. Instead, everyone comes at once when you make a stop. Of course, to balance this out you’ve got those prep stations with food that’s already ready to serve to speed things up. 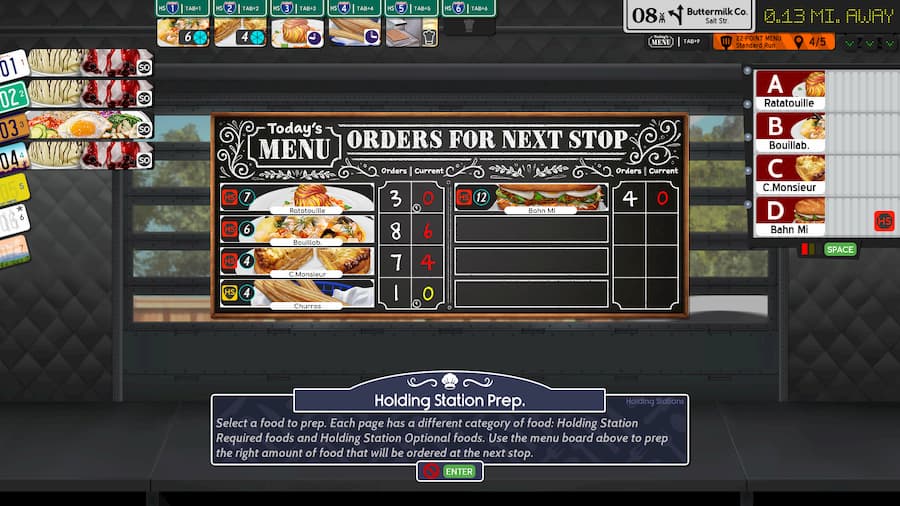 I was a little put off by the holding stations at first. The stations were introduced in the second game, but I don’t remember them playing such a pivotal role. In Cook, Serve, Delicious 3 if you don’t use your prep stations, you’re going to be in some real hot water. The main reason why I was – and still am a bit – put off by these stations is because if I put something like sopapillas, chicken nuggets, and chicken strips on my menu, they are all foods that require no prep before serving. Other than throwing them into the fryer, of course. There’s no challenge with them. No way to screw them up. One of the most stressful and brilliant parts of the game is trying to make sure that you get your customers’ orders right. Without that challenge, things can get a bit dull.

As a result, the first few in-game days can seem a bit boring – but it’s only once you progress and unlock more difficult foods that things start to get tough. For example, hamburgers have so many toppings that customers can choose that they’re one of the most difficult foods in the game. Pair them with chicken nuggets or chicken strips, and you’ve got yourself a decent challenge. It’s all about which foods you pair together on your menu.

Difficult foods aren’t the only challenge that you’re going to face out on the road. As we know, America in the year 2042 is in the middle of a war, so you’ll have to be quick on your feet to avoid any untoward conflict. Sometimes you’ll have some punks shoot up your truck, but it’s nothing you can’t handle. You’ll also have extra difficult levels that are related to the Iron Cook Foodtruck Championship. It can be hard to remember that there’s a story underneath it all when you’re stressing over making your 18th perfect pepperoni pizza, but the ridiculous story fits the ridiculous game. 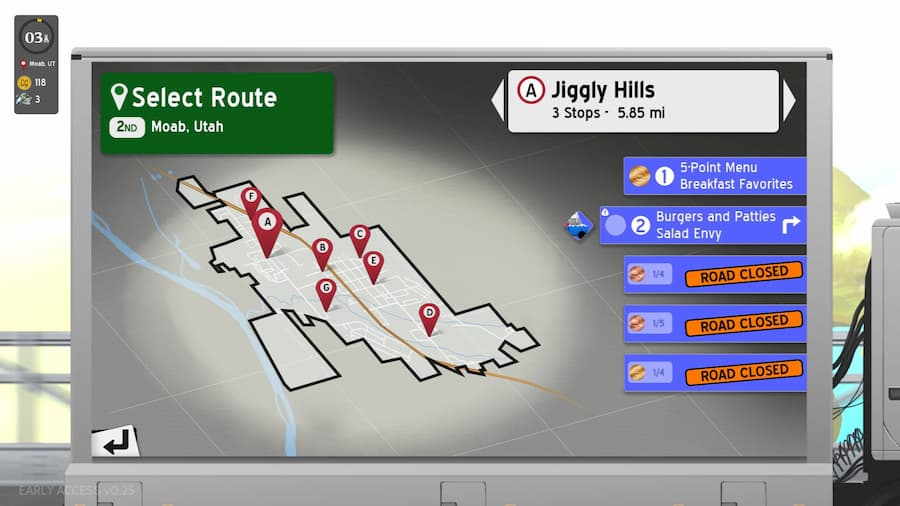 Also new to Cook, Serve, Delicious 3 is the ability to customise your food truck. Adding little trinkets and pictures to your food truck is fun and gives a brief escape from the mayhem. You can express yourself, and there’s a wide range of trinkets on offer, including ‘Black Lives Matter’ motifs, and various pride flags. Representation feels great, even in a video game. You can also spruce it up with small trees and succulents, plushies and tonnes more. Just be careful not to spend too much or you won’t be able to afford to buy new food recipes.

Cook, Serve, Delicious 3 is available on PC, PS4, Xbox One and Switch. We reviewed the game on PC with a code provided by the publisher. 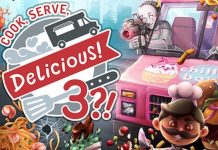 Cook, Serve, Delicious 3 is Shaping Up to be a Scrumptious Bite 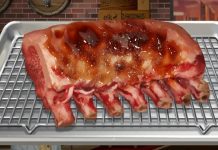