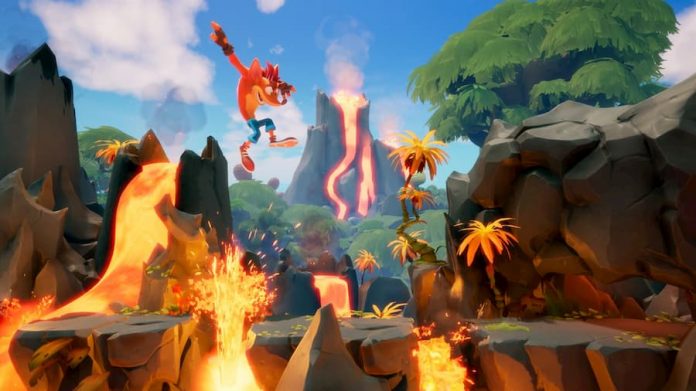 Thanks to a bit of time travel on our part, we’ve been able to go hands-on with a retail Xbox One version of Crash Bandicoot 4: It’s About Time already, and we’re pretty smitten with what we’ve played so far. Though already it’s caused us to turn the air blue. It is challenging, so chances are you will swear a lot playing this game.

On Xbox One X, Crash Bandicoot 4: It’s About Time looks stunning, even though its visuals aren’t particularly sharp. It’s bright and colourful and very well animated – it’s like playing a cartoon, basically. And best of all, it runs consistently at a silky smooth 60fps.

Two playstyles are available, one of which will appeal to long-term fans of the cheeky marsupial. In retro mode, you need to collect lives within levels, so if you die often enough you’ll eventually find yourself thrown back to the level select screen. Play in modern mode, however, and you don’t have to worry about lives. Every time you die, you’ll just be sent back to your last checkpoint. It makes the game much more manageable.

Other than that, and some new abilities that let you manipulate the world, this is Crash Bandicoot as you know and love it. So, it’s pretty safe to pick it up if you enjoyed 2018’s N. Sane Trilogy and are after more old-fashioned 3D platforming action. We will have a review shortly, though, if you aren’t yet convinced. Until then, check out the game’s intro and first three levels below, captured via Xbox One X.

Is Crash Bandicoot 4: It’s About Time Coming to Switch or PC?

How Long Does it Take to Beat Crash Bandicoot 4: It’s About Time?

How Many Levels Are There in Crash Bandicoot 4: It’s About Time?