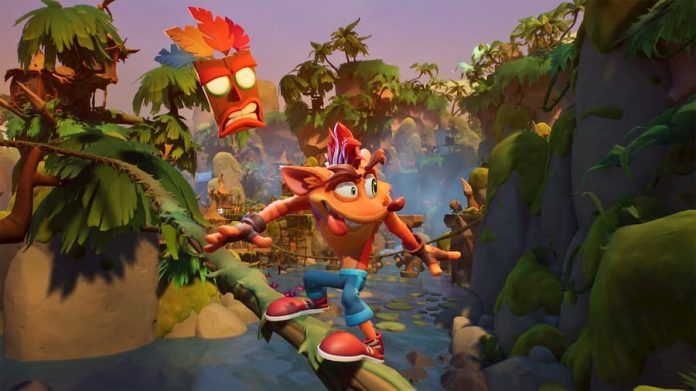 Rather watch this Crash Bandicoot 4 review in video format instead? Click here.

It’s been 22 years since Crash Bandicoot 3 released on PS1, and someone decided it’s about time for a sequel.

Forget about all those non-numbered Crash spin-offs. In Crash Bandicoot 4: It’s About Time‘s universe, they never happened. For better or for worse, this is the true sequel. And if you’re a die-hard Crash fan, you’ll find a lot to love here. You’ll probably also find quite a lot that will make you want to rip your hair out, too.

Let’s start with the good. Crash Bandicoot 4 looks absolutely gorgeous. Playing on Xbox One X, it’s a real feast for the eyes. Level design is beautiful; they’re vibrant, colourful and a joy to look at. There are several different environments throughout the game – from dense forests, to ice levels, to industrial factories – and each one of them is as wonderfully designed as the last. Aesthetically, at least. We’ll get to actual level design in a bit.

You’ll revisit locations that are familiar from the early Crash Bandicoot trilogy, but even when concepts have been reused, Crash Bandicoot 4 puts its own spin on it. It never feels old-fashioned, despite aping the gameplay and design of a 20+ year old franchise. Toys for Bob has done a fantastic job of bringing it into the modern day.

There’s a heck of a lot of content to sink your teeth into in Crash Bandicoot 4, too – but there needs to be. Its RRP of £60 makes it almost twice as expensive as the remade N. Sane Trilogy. It’s a lot to ask. That’s why, outside of the eight-or-so hour main campaign, there’s a wealth of bonus levels to play through, time trials to compete in, and ‘N. Verted’ levels, remixing each existing level with a weird and wonderful art style. It makes for around 100 levels in total, which is a lot. 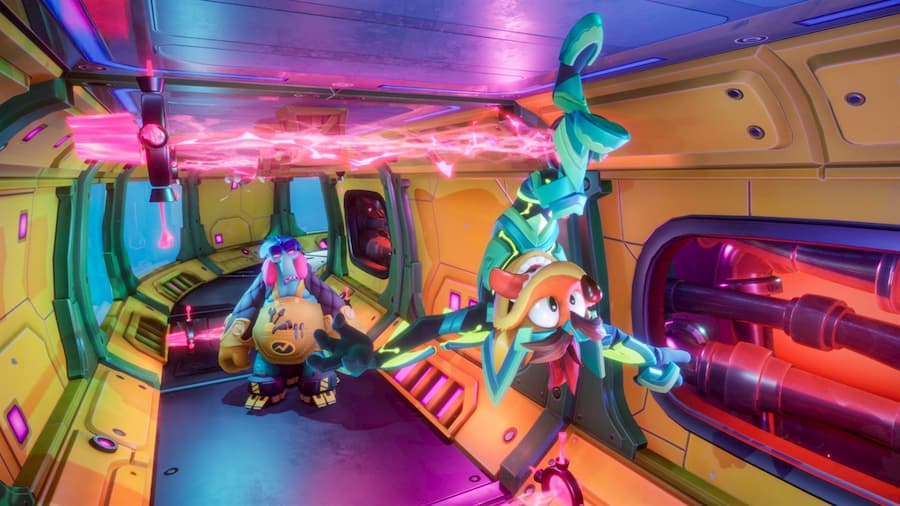 Unfortunately, much of that extra content is either a cop-out or something that the vast majority of gamers aren’t going to unlock. Not unless they have superhuman levels of patience. Let’s talk about Crash Bandicoot 4: It’s About Time‘s ridiculous difficulty level, first.

The Crash games have never been easy, so nobody should have expected Crash Bandicoot 4 to be a walk in the park. The problem is, it’s often so frustrating to overcome a particular challenge within a level that it stops being fun. Inconsistently spaced checkpoints mean you’ll spend a lot of your time with the game simply replaying the same section again and again, until you get it just right. Perspective has always been an issue with Crash Bandicoot games, and nothing has changed here; when you’re running away from or towards the camera, there are many times when it’s difficult to gauge where you need to jump to. On sections that see you sliding down rails especially, the camera angle makes for the biggest challenge.

There are also obstacles that you can’t possibly be aware of ahead of time, unless you’re psychic. Like a charging dinosaur who changes direction just as you approach it, or a lava pit that you can’t see until you’re right over it. And so you’ll find yourself relying a great deal on trial and error and muscle memory; replaying bits again and again until your fingers can somehow press the buttons in the right order. 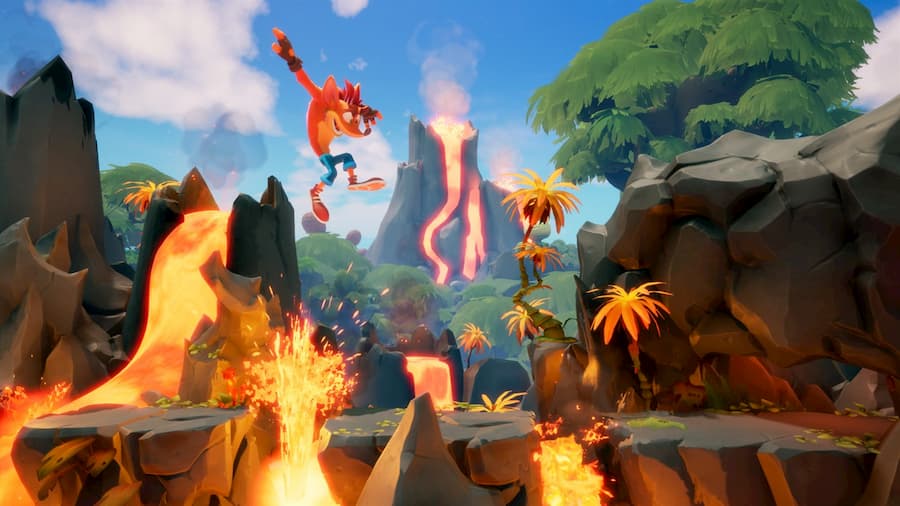 Little has been done to make Crash Bandicoot 4 more accessible to a wider range of players. From the outset, you can choose between ‘modern’ and ‘retro’ playstyle. Retro makes the experience more like the original Crash Bandicoot; if you use up all your lives, you’ll have to restart the level from scratch. Modern mode is more forgiving; it removes the lives and restarts you at the last checkpoint ad infinitum. If you keep dying in the same area repeatedly, you’ll sometimes be given an additional checkpoint, or you’ll respawn with an Aku-Aku to offer you a layer of protection.

In an age where offering real accessibility in videogames is more important than ever, Crash Bandicoot 4‘s offerings are severely lacking, and that’s a big disappointment.

It’s made more disappointing by the fact that, actually, underneath its frustrations, Crash Bandicoot 4 is a wonderful game. A lot of love and care has gone into creating it. Not only does it look beautiful, but it tells an engaging story and has some wonderful ideas. Throughout their adventure, Crash and Coco – you can switch between them at will – encounter four masks, each with a special ability to imbue into them. There’s the phase shift, which switches out visible objects with a touch of a button; a super-powerful dark matter spin, which gives Crash the ability to jump over large distances; the ability to slow down time momentarily; and a gravity switcher, which allows you to walk on the ceiling. 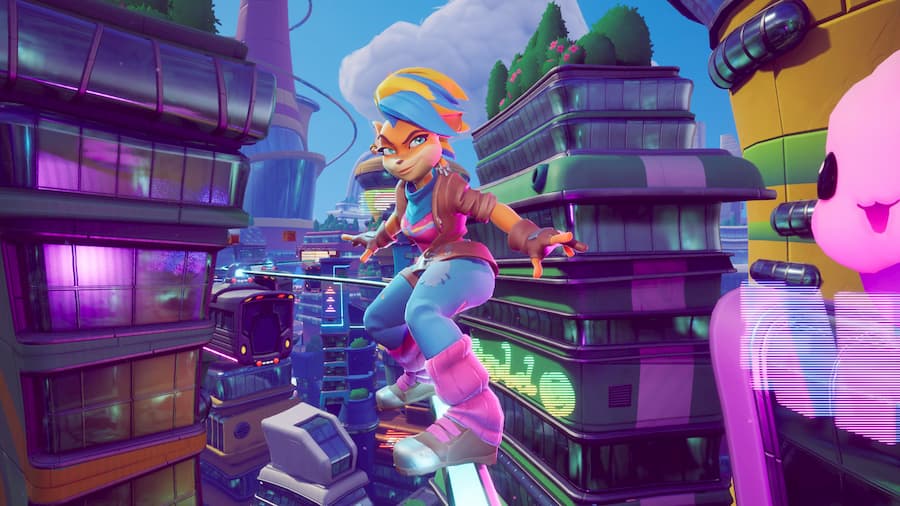 These abilities are introduced gradually throughout the game, and later levels will see you use a combination of all four to overcome challenges. They offer a welcome spin on traditional Crash gameplay, and really do help to bring Crash Bandicoot 4 into the modern day. Their implementation isn’t always great, however. Jumping while using the dark matter mask is imprecise and hard to judge. Slowing down time is also fiddly and frustrating. All of the skills, at times, require you to activate them mid-jump, which can lead to a lot of fumbling over buttons. The game asks for a high amount of precision from you when it comes to your inputs, but often doesn’t offer the same in return.

Alongside Crash and Coco, there are also numerous levels that place you in control of either Neo Cortex, Tawna or Dingodile. They all have their own abilities: Cortex can turn enemies into platforms, Dingodile has a useful vacuum gun, and Tawna has a hookshot that she can cross longer gaps with. Several of their levels are optional, but you will find yourself in control of each of them a handful of times throughout the main campaign. Tawna’s abilities are particularly fun, but both Dingodile and Cortex feel a little sluggish to control in comparison.

Let’s go back to Crash Bandicoot 4‘s extra content. Some of these come in the form of Flashback Tapes. There are 21 Flashback levels in total, each offering a challenging crate puzzle. To unlock them, you’ll need to find a Flashback Tape in a main level. The problem? You need to reach the tape without dying in order to collect it and unlock the Flashback. You’ll pick up the first one or two very easily, but most appear pretty deep into the level. For the most part, only the most dedicated and patient players will have the determination required to collect the rest. 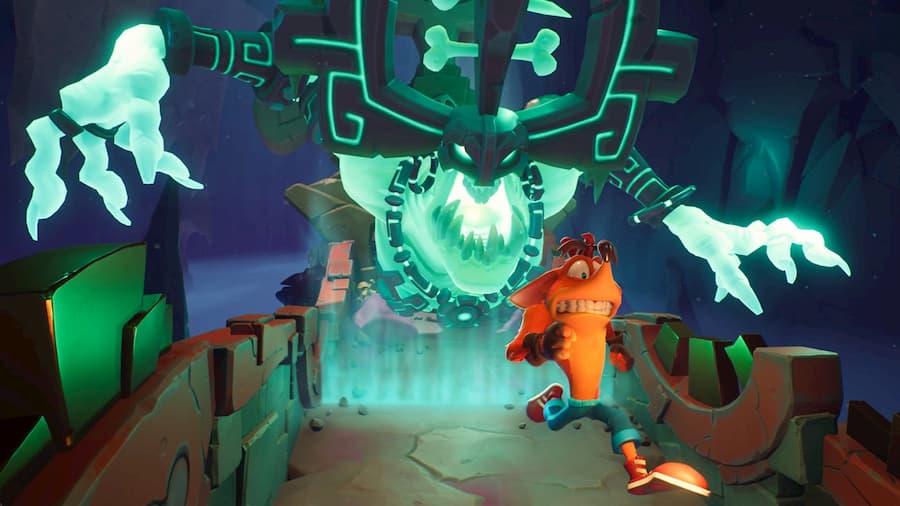 So that leaves the N. Verted levels, which thankfully unlock automatically. They become available about a third of the way into the game, and from that point forward, every time you complete a level you’ll be able to play it again in its ‘N. Verted’ mode. These are a mixed bag; it essentially applies a strange art filter to the levels. Some slightly change the mechanics, but never in a truly meaningful way; a retro pixel filter makes it so you accumulate points for killing enemies and smashing crates, for example.

If you’re keen to unlock extra costumes for Crash and Coco, you’ll want to play through at least some N. Verted levels, but for the most part, it feels like a gimmicky excuse to add more content for the game. Many of the filters are horrendous, making a beautiful game a headache-inducing eyesore. They add little to the overall value of the experience.

There’s a lot holding Crash Bandicoot 4: It’s About Time back from being the leading platforming experience it could be. Its lack of accessibility is a real issue, and it’s still plagued with problems that existed in the original Crash games, like awkward camera angles and imprecise jumping. But it is a beautiful-looking game, and fans of the series will undoubtedly get a serious kick out of being back in control of Crash – even if they will need god-like patience for some of the game’s more trying sections. Its extra content is a let-down though, and the full RRP for a game that most players will be done with in around eight hours leaves a big question mark over whether Crash Bandicoot 4 is a worthwhile purchase. Ultimately, it comes down to how strongly you feel about the franchise.

Crash Bandicoot 4 is available on PS4 and Xbox One. We reviewed the game on Xbox One X with a retail copy purchased by GameSpew.