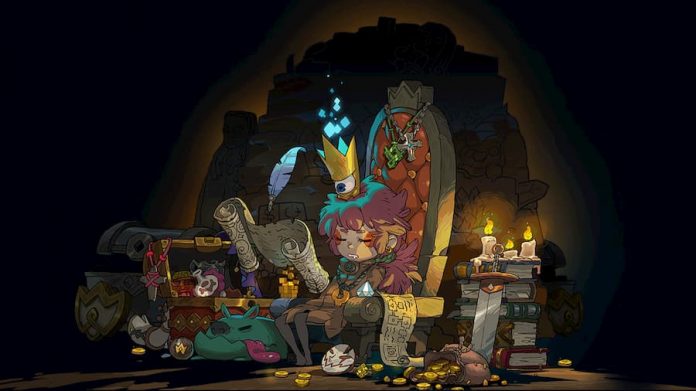 Team17 seems to have become the go-to publisher when it comes to Rogue-like games lately.

First it was Neon Abyss, then Going Under. And now, not even a month later, there’s Crown Trick, a gorgeous Rogue-like centred around strategic turn-based combat. Developed by NEXT Studios, it’s certainly another excellent title for Team17 to add to its catalogue. And whether you’re a fan of Rogue-likes or strategy, you really ought to give this one a try. If you’re a fan of both? Well, it’s your lucky day.

Crown Trick casts you as Elle, a girl who finds herself stuck in a world of nightmares accompanied by a talking crown atop her head. There is a narrative here if you care for it, but as with any Rogue-like, it’s hardly important; it introduces the action without getting in the way. And that’s the way we like it. In order to escape her nightmares, Elle must fall asleep and face what threatens her head-on. In this case, it means making her way through a labyrinth of dungeons, all filled with various foes out to get her.

Thankfully, Elle’s equipped rather well for the task at hand. Before starting any dungeon, she’ll be able to choose a weapon, and she’ll have the use of a handful of magical abilities. As you play through the game and defeat more bosses, you’ll learn their abilities, giving you a larger arsenal to choose from. And of course, you’ll pick up new weapons along the way. You can only ever have one equipped at a time though, so choose wisely.

Weapons come in various shapes and sizes. Axes can sweep the area directly around Elle, while gun-type weapons can damage in a line directly in front of her. Daggers can damage just directly in front of her, and polearms can reach a little further. Crown Trick‘s combat takes place on a grid, and so the reach of your weapon plays an important part in combat strategy. Enemies make a move when you move, so this isn’t a game to run gung-ho into a room filled with enemies; it’s a game about careful consideration. 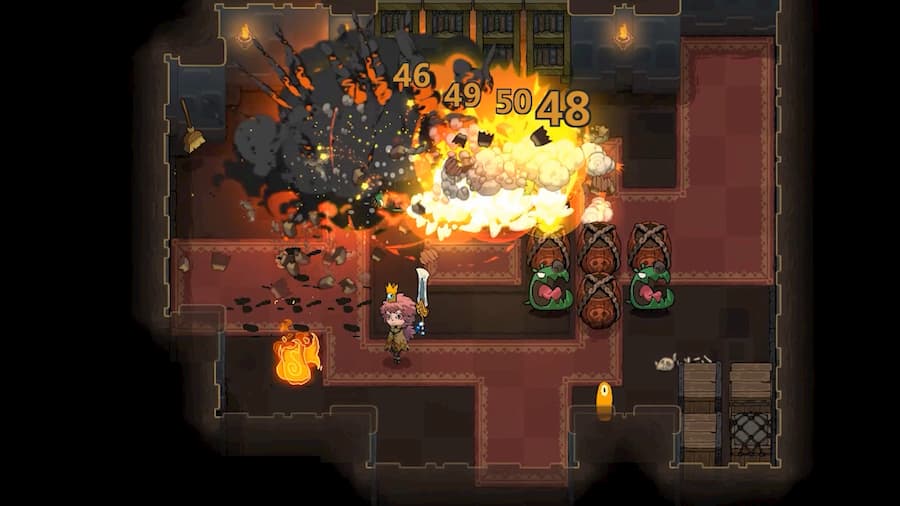 Most weapons have useful skills and stats attached to them. An axe, for example, might freeze enemies if it hits more than three at once, and a gun might set foes alight if you manage to shoot four with one shot. Getting the most out of combat means lining up your attacks to make effective use of your weapon. The same goes for skills, too. Each of your skills will attack a certain area, or allow you to target a specific enemy within range.

Learning each enemy’s attack pattern is also really useful. Some enemies are a little more random, but you’ll soon become accustomed to the basic foes filling a dungeon. Perhaps they can only attack you if you’re directly in front of them – but your weapon may be able to reach them from the side, or from two squares away.

You also need to watch out for environmental hazards during combat in Crown Trick. Explosive barrels, pools of tar, puddles of water and more often litter rooms. While these can be used to your advantage if you’re careful and clever, taking a step wrong could be your downfall. If you’re too close to an exploding barrel when an attack accidentally sets it off, that could be the end of your run. 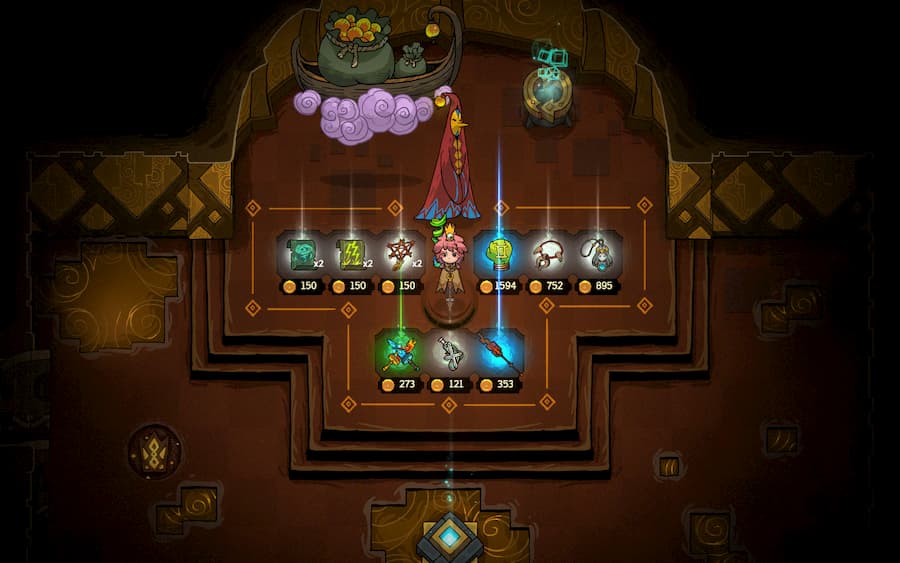 And of course, Crown Trick is a Rogue-like. So once the life’s drained from Elle completely, it’s back to the beginning you go. You do have a range of persistent upgrades, though, ensuring you continually get a little stronger. Earning tokens each time you play, these can be exchanged for various permanent perks. You’ll also find blueprints, adding new weaponry to Elle’s potential loadout, meaning better equipment will be able to drop on future runs.

While combat is the focal point of Crown Trick, there’s much more to exploring its dungeons than simply killing foes. There’s loot to be found, of course. Boxes and jars litter most rooms, and attacking them often reveals coins. After ever boss fight, you’ll have the opportunity to visit a shop and buy new items and equipment. Equipment will also drop after you’ve killed enemies; relics add passive skills to your arsenal, and items can be used in combat to deal damage or debuffs to enemies.

There are also secret rooms to discover while exploring Crown Trick‘s dungeon. If you spot a suspicious-looking space on a wall, there may be a secret passage hiding behind it. It might be nothing, but it’s worth checking. Machines wanting you to gamble your hard-earned coins, or make a risky deal in exchange for something useful also lurk in each dungeon; you may often be tempted, but if your gamble doesn’t pay off, you might find yourself at a serious disadvantage. 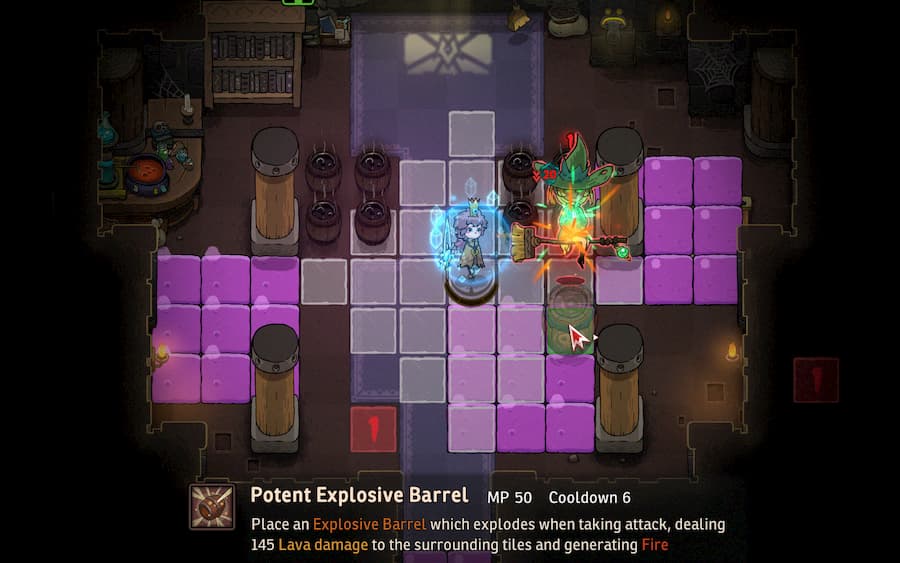 Boss fights are the highlight of Crown Trick, without a doubt. Each one is varied and unique, and provides an engaging challenge. Bosses have unique attack patterns that are less predictable than the game’s smaller enemies, so you need to constantly stay alert. You’ll need to utilise all the of the attacks and skills at your disposal, also making use of the environment where you can. Some provide extra challenge on top of straightforward combat, too. There’s the scientist that you can only attack once you’ve laid traps to lower his shield. And there’s a chess-playing boss, whose minions come in the form of chess pieces. It’s a tough fight, but one of the most rewarding; you’ll need to know how each chess piece can move and ensure you keep yourself out of the way of danger.

But that’s just a taste of what Crown Trick has in store. The nature of a Rogue-like means it might take you a while to progress, but even if you find yourself repeating the same sections again and again, the game does a good job of mixing things up. Bosses are never in the same order, and what floors you’ll find yourself on are randomised, so no two games ever feel the same.

You’ll have to leave any run-and-gun sensibilities at the door when you jump into Crown Trick; it’s a game about thoughtful manoeuvres and carefully-planned attacks. But it results in combat that’s extremely rewarding, and a challenge that’s a lot of fun to take on. Progressing in Crown Trick may be tricky, but it’s never insurmountable – and you’ll be enjoying yourself so much that you’ll want to keep jumping back in, seeing if you can get that bit further next time.

Crown Trick is available on PC. We reviewed the game with a code provided by the publisher.