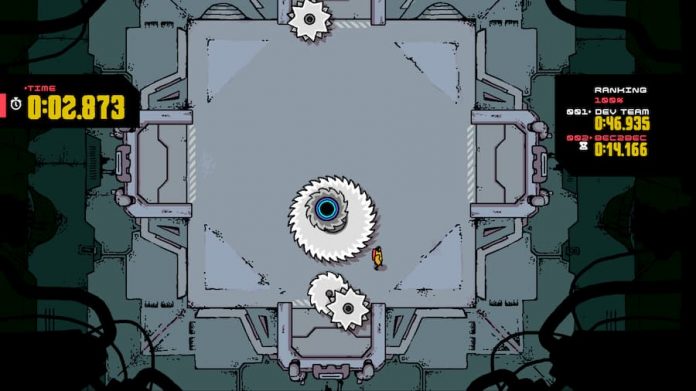 Scientist’s Log Day 1: Part of me thinks these discs are sentient.

Why else would they hunt me down so ruthlessly? Jupiter was far from perfect before the giant disc showed up, but this is real torture. I suppose it was my fault. My curiosity got the best of me, but I never imagined that I would be walking into a glorified slaughterhouse. The discs are sharp and quick. They are clever and crude. They are relentless.

That’s the story of Disc Room from the four person development team Terri, Dose, Kitty,  and JW. On Jupiter in the year 2098, a strange disc has appeared in the orbit of the planet. One brave and curious scientist decides to venture onto the disc and discovers a horrifying labyrinth of rooms filled with smaller discs that threaten to kill him. You control the scientist as he dies again and again, slowly moving from room to room to discover the secrets that lie deeper inside the intergalactic slaughterhouse.

Disc Room’s gameplay is incredibly easy to learn. That doesn’t mean the game itself is easy – far from it – but anyone can pick it up and give it a try. You control the scientist with your arrow keys. When you enter a room, discs will begin spawning in, spinning around in all directions. You’ll have to have incredibly quick reflexes to be able to survive longer than a couple of seconds. You’ll eventually die, but if you survive long enough eventually a door will open letting you move on to the next.

You’ll also earn abilities for your character as you get through a certain number of rooms. The first ability you’ll unlock is a dash that lets you pass safely through a disc. This can come in handy if you find yourself trapped in a corner with discs coming at you from all sides. A favourite of mine is the ability to slow down time. You can only do this for a few brief moments, but a few moments in Disc Room often makes all the difference. 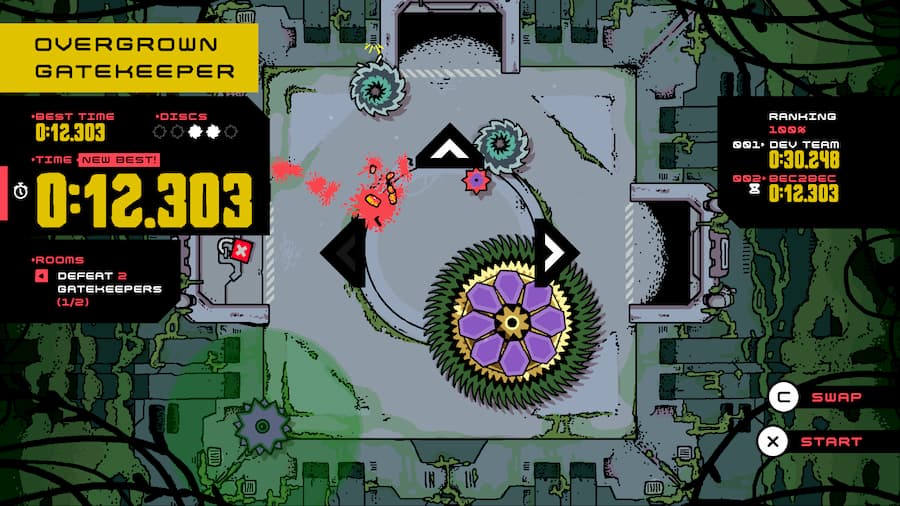 But don’t think that once you’ve got used to Disc Room that levels will get easier. Not a chance; things only get more and more difficult. There are dozens of different kinds of discs. You’ll have to learn how these discs work in order to properly avoid them. Some discs shoot out smaller discs, some move in unpredictable patterns, and all of them want to kill you. Being adaptable and observant is key if you’re going to want to make it far in the slaughterhouse.

Many rooms will also have goals for you to complete. These goals give players a purpose rather than just having them die again and again with no real direction. You’ll be challenged to survive for longer than 10 seconds, or survive for 20 seconds in 10 different rooms, for example. Completing these goals helps you progress to more rooms and gets you closer to unlocking new abilities. Not only will you have to adapt to the ever-changing normal discs and goals to complete, but you’ll also have boss battles to take on.

The boss battles in Disc Room, like regular rooms, also have a goal for you to finish. The first boss battle of the game, for example, is a large spinning disc that you have to take down. The disc drops a yellow substance and when you pick it up, it damages the giant disc. It’s not as easy as it sounds though; the large disc also shoots out smaller discs and there are other discs going around the outside of the room as well. It’s tough as nails – but that’s all part of the fun. 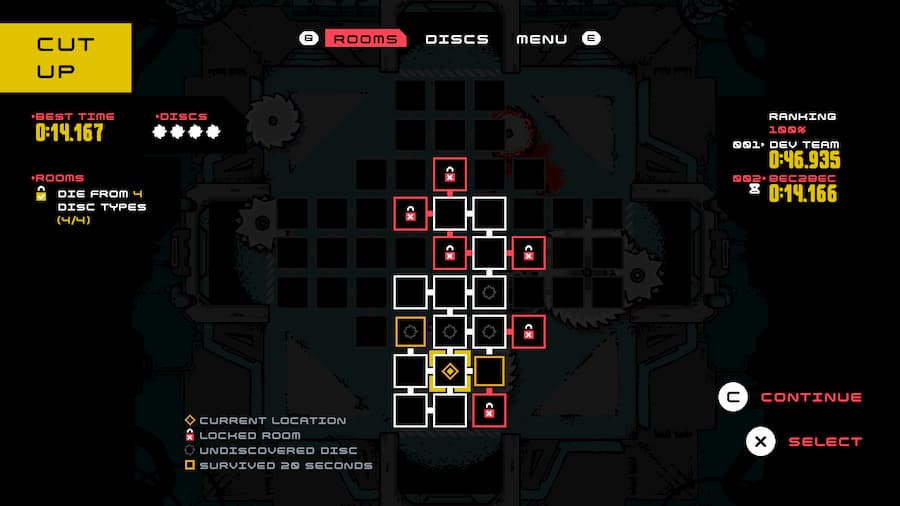 Disc Room’s gameplay and story aren’t the only things that impress. It has to be mentioned that Disc Room just looks great. Period. Not just its graphics, which are a detailed pixel-art style, but the menus, the game map and even the leaderboards that show your best times are a fun style that feels appropriate for the game’s tone. Every detail of Disc Room has been well-thought out and the further you delve into the dangerous corners of this mysterious labyrinth, the more this becomes evident. Everything fits together perfectly, like a well-oiled death machine.

Disc Room is incredibly difficult. It definitely won’t be for everyone. If you lack patience and find yourself getting frustrated in games where you die frequently, it’s probably not for you. But for those of us that enjoy being furious, who let that fury push us further and faster because we crave a challenge, Disc Room is fantastic. You’ll find yourself going back again and again, getting a little bit further each time until you reach its conclusion. And you won’t be sorry when you do.

Disc Room is available on PC and Switch. We reviewed the game on PC with a code provided by the publisher.