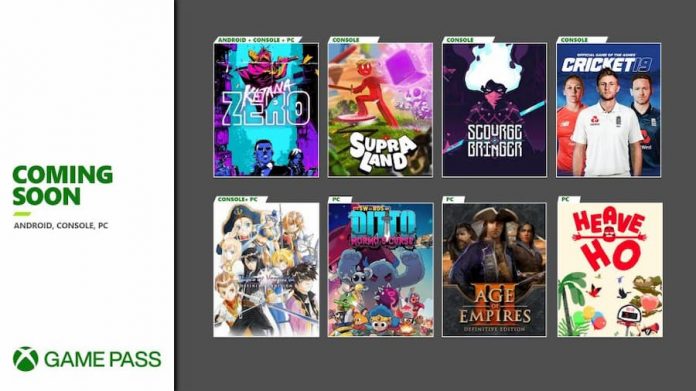 At this rate I’ll never catch up to all the games on Xbox Game Pass.

The newest games coming to the Xbox Game Pass subscription service have just been announced.

Available on October 15th for PC are Age of Empires III: Definitive Edition, Heave Ho, and The Swords of Ditto: Mormo’s Curse. In Age of Empires III you command a mighty civilisation all across Europe and the Americas. In Heave Ho, players grab each other’s hands and dangle their bodies to make it through difficult obstacles. It’s a game made for you and your friends to play. Finally, The Swords of Ditto: Mormo’s Curse is an action RPG that has players taking on the role of a brave hero fighting against the evil Mormo through terrifying dungeons.

Available for Android, console & PC on October 15th is Katana Zero, a neo-noir, action-platformer. In the game players must be quick on their feet and manipulate time to take out enemies.

Coming to console & PC is Tales of Vesperia: Definitive Edition and coming only to console are Cricket 19 (October 22nd), SourgeBringer (October 21) and Supraland (October 22nd). Tales of Vesperia is a tale of two friends who go on an epic journey to save their world. Cricket 19 is the official game of the 2019 Ashes Championship. ScourgeBringer has players moving through a roguelike platformer helping the protagonist hack and slash her way through ancient machines. Finally, Supraland is a first-person, open-world, action puzzle platformer (what a mouthful!). In the game players charge their way through hordes of enemies to gain an audience with the Blue King.

There are even more additions to Game Pass coming, including DLC and game updates for Black Desert Succession, Destiny 2, Doom Eternal, State of Decay 2 and Overcooked! 2. New perks for Game Pass Ultimate subscribers are also incoming,  including four cars for Forza Horizon 4.

The full line-up of upcoming games is as follows:

Buy Game Pass with a discount on CD Keys