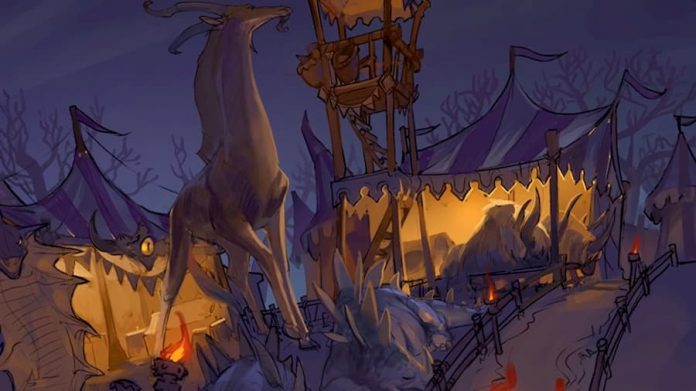 Those that visit the Darkmoon Faire never leave.

Step right up, step right up to Azeroth’s only travelling carnival, the Darkmoon Faire! Expect to see supernatural wonders, exotic beasts, incredible performances and more. Not only that, but come with an empty stomach because the faire has sweet and savoury treats from all around the world. Just ignore those nagging whispers that tell you something is suspicious; it’s all fun and games at the faire.

Madness at the Darkmoon Faire will launch worldwide on November 17th with 135 new cards to collect. This expansion sees the return of the old gods: C’thun, N’Zoth, Yogg-Saron and Y’Shaarj. Each of the Gods has their own deck archetype with a Battlecry that can truly turn the tide in a match. Even Yogg-Saron’s Battlecry lets players spin the Darkmoon Wheel if you’ve cast at least 10 spells during the game.

Players can collect (and tamper) with some Old God artifacts including four ancient spells with strange and wacky effects.

If you’re interested in watching all of the new cards as they’re revealed you can find the full release schedule here.

The Darkmoon Faire Bundle is available to pre-purchase right now and includes:

Check out that awesome trailer below.