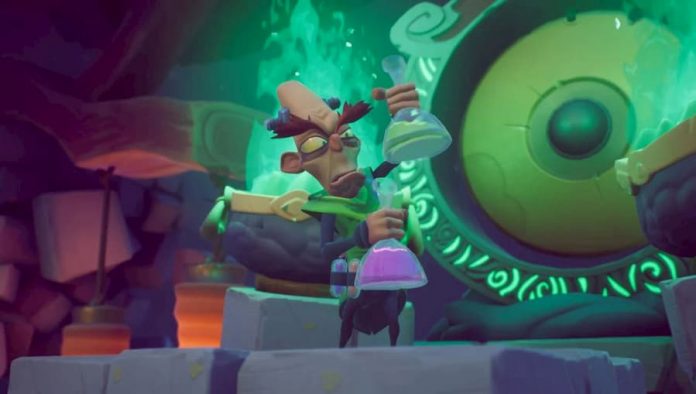 Crash Bandicoot 4‘s second boss fight can be a bit of a pain if you don’t know what you’re doing. Thankfully, we’ve got you covered.

The second boss you face off against in Crash Bandicoot 4: It’s About Time is N. Brio. Otherwise known as Nitrus Brio, he’s a mad scientist who’s previously worked for the dastardly Neo Cortex. But like every boss in Crash Bandicoot, he’s out to get you. And he has a few nasty tricks up his sleeve.

The fight against N. Brio is made up of a number of waves. As it starts out, N. Brio will fling poisonous toxin rings at you. Avoid them by jumping over them. Don’t double jump, because doing so can make it hard to time your lands carefully. Well timed single jumps are all you need.

After each wave of poison throwing, N. Brio will throw gooey monsters at you. He’ll throw one to start with, and then the next wave will see two, then three. Spin attack the monsters to launch them back at N. Brio, damaging him. You need to damage him six times to initiate the next part of the fight.

Annoyingly, if you get hit at any point during this first phase, you’ll need to start all over again.

The second phase of the boss fight against N. Brio sees him turn into a hulking giant. He’ll jump onto your platform and try to attack you with thumps and jumps. Avoid his attacks; after he’s tried and failed to attack you, he’ll get dizzy (you’ll see the animation above his head). Here, use your dark matter ability to spin into him and knock him off the platform.

Repeat the process three times, and that’s it; you’ll have beat N. Brio. As long as you stay cool and keep nimble at dodging attacks, it’s a pretty straightforward fight.