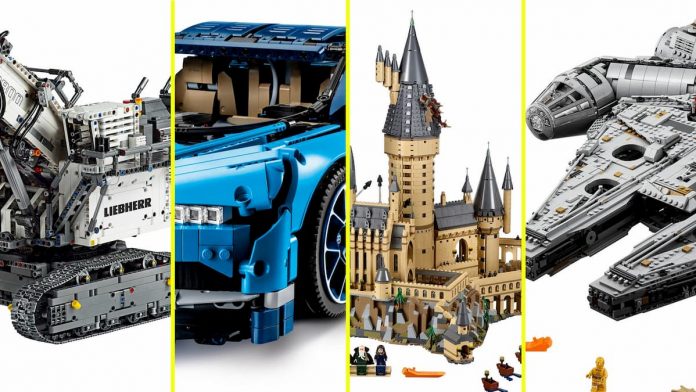 As the years have gone on, LEGO sets have got bigger and more complex.

But with more bricks and more complicated designs, there comes a higher price. For LEGO fans though, paying a little more for a stellar set is usually worth the cost. It’s now an ordinary occurrence to pay in the region of £200 to get our hands on the latest build.

But what about the most expensive LEGO sets ever released? These aren’t the ones that are now worth a fortune on eBay, but the sets most expensive at RRP. Most, of course, are from the last few years – but some might surprise you.

This is far from the first LEGO Imperial Star Destroyer, but it is the hugest by far. And costing an eye-watering £650, it’s one of the two most expensive LEGO sets ever released. Will we ever see a set costing more than that? It’s hard to imagine, but who knows. Released in 2019, this Imperial Star Destroyer packs in a massive 4,784 pieces, but it’s the sheer scale of it that’s most impressive. It’s a whopping 110cm long. Over a metre! If its price isn’t barrier enough for most of us, a lack of storage or display space will be.

Before the giant Imperial Star Destroyer came to join it, 2018’s Millennium Falcon was the single most expensive LEGO set by a huge margin. A margin of over £200, in fact. One of many LEGO Millennium Falcons available, this one is the biggest and most impressive of them all. It’s made up of an incredible 7,541 pieces, and takes in the region of 30 hours to build. It’s certainly not a build for the faint-hearted, but what an impressive model it is when it’s finished.

It probably comes as no surprise by now that yet another Star Wars set sits among this list of the most expensive LEGO sets ever released. This one is a model Death Star, complete with various rooms, a mini TIE fighter and a whopping 27 minifigures. It’s both a fantastic playset and a superb display set, and it’s one of the longest-running LEGO sets too. Released in 2016, it’s still available, although we’re not sure how much longer it’ll be on shelves. If you’ve had your eye on it and haven’t yet taken the leap, it might be wise to do so sooner rather than later.

The first not-Star Wars LEGO set to appear on the list, the Liebherr R 9800 is a scale replica of a huge excavation vehicle, complete with multiple working motors. Not only is it one of the most expensive LEGO sets you can buy, it’s also the single most expensive Technic set released to date.

And when you see it in the flesh, it’s not hard to see why. It’s an extremely impressive – and huge – Technic model. You can move it back and forth, spin the vehicle around, and independently operate the arm and scoop. At 4,108 pieces, we can attest that this takes some serious time to put together. But the finished model is quite the showstopper.

The newest entry on this list is also one of our favourites. Sure, this recreation of Diagon Alley might be one of the most expensive LEGO sets released, but it’s hard to argue it’s not worth the money.

It’s essentially four sets in one, with four iconic Diagon Alley buildings each being its own model. And being 5,544 pieces, it takes some serious building too – and a lot of space to display. Side by side, the whole set measures over a metre in length. Phew!

The LEGO Super Star Destroyer was extremely expensive for its time. And if you happen to have one of these from 2011, it’s worth way more than its RRP now. It’s 3,152 pieces, making it one of the biggest LEGO sets of its time. It’s still a remarkable model today and doesn’t much show its age.

Look at this thing! It’s beautiful! Made up of 3,696 pieces, it’s a faithful representation of the real-world car in a stunning lime green colour. There’s working suspension, steering and a movable gearshift too. It’s quite expensive, but it’s a darn sight cheaper than a real Lambo. So it’s the closest most of us will be getting, unfortunately.

You can practically hear the Harry Potter theme song in your head just by looking at this thing. At 6,020 pieces, Hogwarts Castle is one heck of a model. It’s huge, and intricately detailed. It’s held back only by the fact that it’s microfigure scale rather than minifigure, but it’s understandable – the thing would be huge otherwise.

A set costing nearly £350 in 2017? That’s huge. Before 2018’s giant Millennium Falcon, we had this one. It’s a bit smaller, clocking in at 5,197 pieces, but when it released it was the biggest set ever, by a large margin. It’s also extremely rare now, so it you have one of these laying around, even used, it’s worth a whole lot more than you paid for it.

The second set on this list that’s part of LEGO’s scale model Technic range, the Bugatti Chiron is beautiful. Just like the Lamborghini, it has working parts, like steering and suspension. And plenty of little details, like the Bugatti logo on the grill, spoked rims and interior detail. It’s huge too; being made of 3,599 pieces. It’s certainly not one for a casual builder, that’s for sure.