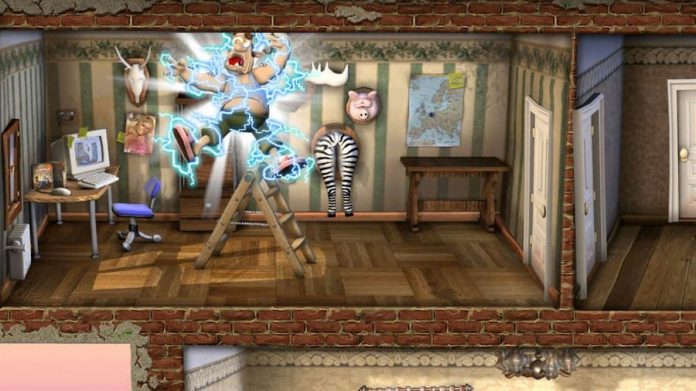 We’ve all had to deal with neighbours from hell at some point, haven’t we?

Either because they’re noisy, messy or just generally unsavoury – a neighbour you don’t get on with can be a nightmare. And if you haven’t had a troublesome neighbour, you have to consider whether you’re very lucky indeed, or you are, in fact, a neighbour from hell yourself.

In Neighbours Back From Hell, Woody’s neighbour does indeed seem like a pain in the backside. But by the end of this sub-five hour adventure, you have to wonder whether the tables have turned. You see, fed up with the rowdy Mr. Rottweiler, Woody has called in a film crew to follow him as he gets his own back. It all seems a bit extreme if you ask me.

A remastered compilation of both the original Neighbours From Hell and its sequel, Neighbours From Hell 2: On Vacation, Neighbours Back From Hell rearranges their levels (or episodes as they’re called here) into four bingeable seasons. You can tackle the episodes in each season in whatever order you like, and once you’ve made your way through all four seasons, a final episode opens up to bring the game’s neighbour-pranking antics to a close.

The first two seasons see the action confined to Mr. Rottweiler’s home. Initially only four rooms will be available for you to explore, and you’ll want to do so while Mr. Rottweiler is going about his daily routine. In the first episode, for example, he simply moves between the living room and the kitchen, enjoying a lazy day. But as you progress through the episodes more rooms of the house are brought into play, and his routines become much more elaborate. 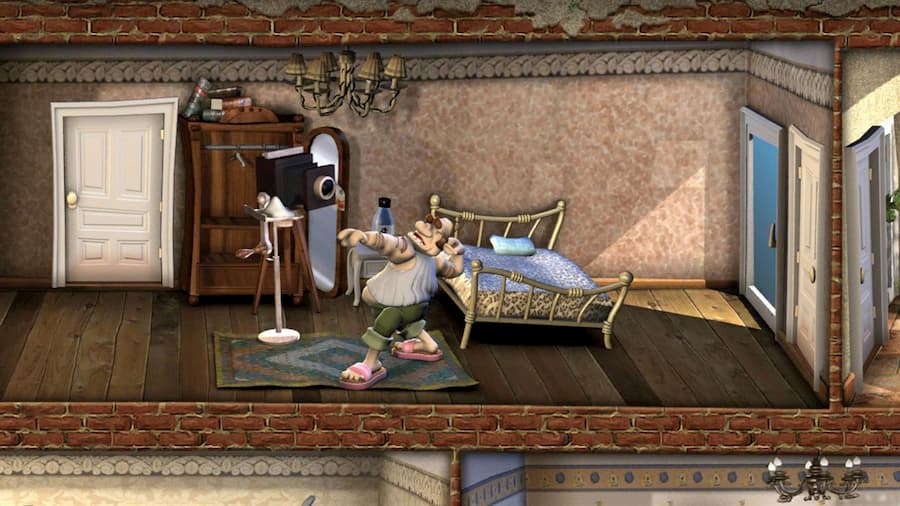 The gameplay itself is best described as point and click meets stealth. Making your way through rooms undetected, you’ll find useful objects hidden in plain sight as well as concealed in such things as drawers and bins. Once you’ve obtained an item, your next task is to discover where to use it in order to prank the unfortunate Mr. Rottweiler. Upon finding superglue, for example, you might apply it to the binoculars he keeps using to nosey across his street. Or you might deface the picture of his mum he proudly displays in his hallway with a permanent marker.

Each episode has a set number of pranks for you to discover and complete, and you’ll be awarded a gold coin for each one you successfully pull off. You don’t need to complete them all to progress though; once you’ve reached the goal in each episode, you can walk straight out of the front door if you wish. Sometimes it’s a good option, too, as if you’re caught in the act by Mr. Rottweiler three times, your efforts will have been in vain.

The second half of Neighbours Back From Hell is where things get a bit weird. Verging on stalker territory, Woody follows Mr. Rottweiler and his mum to various locations on their holidays. With episodes then taking place in multiple locations such as China, Mexico, and even a boat, the action becomes a little less repetitive but much more over-the-top. New gameplay elements are added too, such as reusable items and a minigame in which you need to try and keep an object within a circle for a set amount of time as it fights to escape.

Mr. Rottweiler’s mum also becomes someone to avoid during Neighbours Back From Hell‘s later episodes, making sneaking around even more troublesome. Still, the difficulty level never feels too challenging, though some might get frustrated thanks to the game’s trial and error nature combined with the task of avoiding your two unfortunate subjects. There are handy icons in the lower left-hand corner of the screen that let you know what they’re going to do next though. 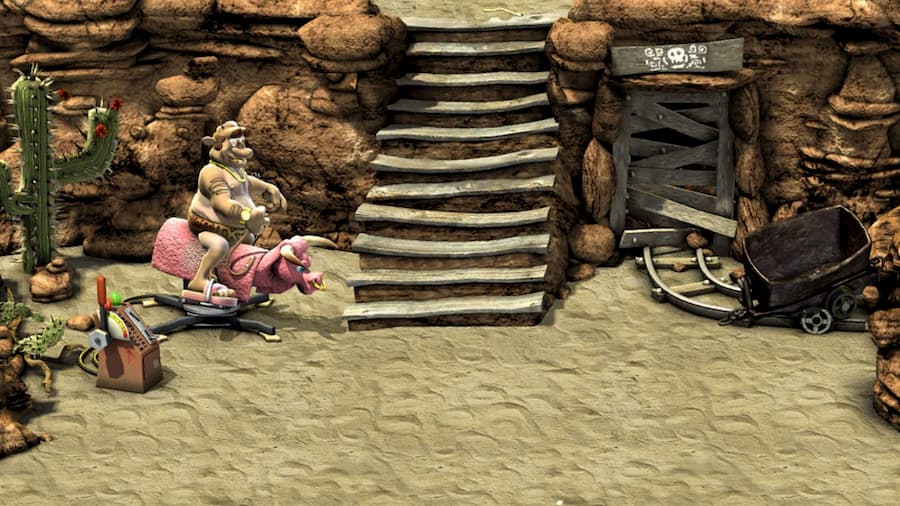 Ultimately, it’s the fact that Neighbours Back From Hell is a remaster of two games that’re over 15 years old that holds it back from overly impressing in the year 2020. While the visuals tidy up nicely thanks to their Aardman-esque art style, the repetitive and formulaic gameplay feels firmly rooted in the past. Chances are, you’ll also get fed up of seeing Mr. Rottweiler throwing the same paddy after every trick you play on him.

Still, it’s to Neighbours Back From Hell‘s credit that it still offers an original experience. Furthermore, it exudes the same sense of humour as 90s British sitcoms such as Bottom with its somewhat violent and madcap humour that’s also a bit risqué at times. It’s just a shame that the gameplay gets tiresome so quickly. If you fondly remember the original titles and fancy reacquainting yourself, you’ll probably have a good time with Neighbours Back From Hell while it lasts. Newcomers might somewhat enjoy it too. But it’s quite forgettable once it’s over.

Neighbours Back From Hell is available on PS4, Xbox One, Switch and PC. We reviewed it on Xbox One X with a code provided by the game’s publisher.