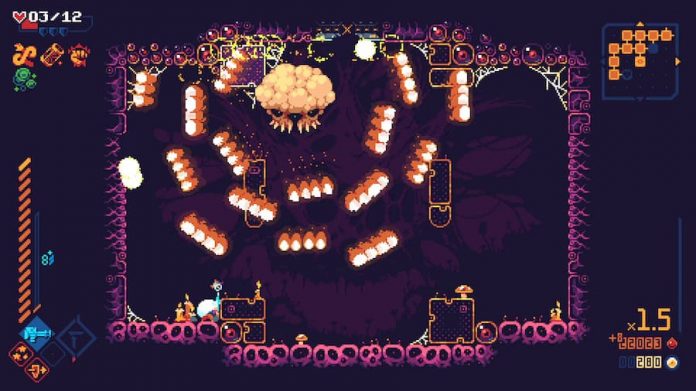 As the strongest member of her clan, Kyhra has been given an important task.

She’s to take on the ScourgeBringer, a challenging ordeal that no one else has returned from. But within it perhaps lies the key to the redemption of humanity. What awaits Kyhra inside? You’re about to find out. Though you’ll only venture deep within its depths if you have your wits about you.

ScourgeBringer demands that you play offensively – most of the screen-sized rooms you enter in the dungeon are filled with a plethora of enemies, and to move to the next your only choice is to take them down. To do that you’ve got basic sword attacks, that flow like water from one to another; a smash attack that can stun some enemies and knock them back; and a dash that enables you to quickly cover ground. What’s brilliant is that you can endlessly chain these together – you can clear rooms without ever touching the floor if you’re coordinated enough.

The breakneck pace of ScourgeBringer‘s combat, along with the metal music that kicks in whenever a combat encounter commences, give the game the same energy as DOOM Eternal. Even though they’re totally different games, you need to somewhat approach them the same way – you need to use your agility to manoeuvre around enemies and avoid their attacks, all the while laying on the hurt of your own. Though being melee-focussed, your reward for playing well here is the chance to eradicate enemies at a distance; by slicing and dicing effectively you regenerate ammo for whichever gun you’re carrying, providing limited high-damage ranged attacks. 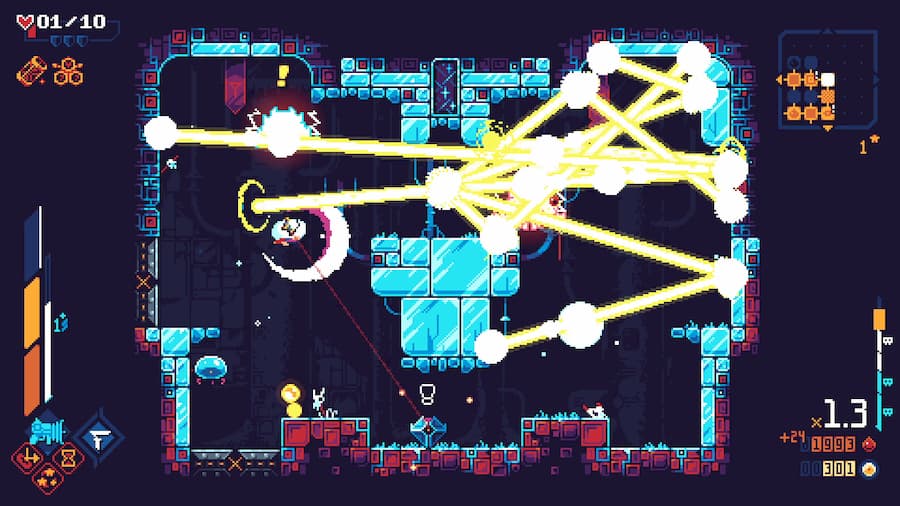 A free-moving Rogue-lite platformer, ScourgeBringer is as challenging as it is fluid. Upon entering the first of its dungeons you’ll be given a quick intro to its basic controls, but it’s up to you to master them, and you’ll need to if you want to make any considerable progress. With numerous areas for you to make your way through, if you die, you start back at the beginning. Though before you head out on your next run, you’re given the chance to unlock a range of permanent perks and skills that can make subsequent runs easier. They’re not free though; you’ll need special droplets of blood to buy them, and the game doesn’t just thrown them at you.

Beating ScourgeBringer then, requires you to try, try and then try again. I can’t imagine anyone beating it on their first attempt. In fact, it’s probably impossible – some of the skills you acquire via the game’s numerous skill trees completely change how you take the fight to the enemy, and without them it really is an uphill struggle. Though while you’ll grow dependent on your skills, help can be found as you explore the ScourgeBringer. Locating an Altar of Blood, for example, allows you to select a perk that will last as long as your run. And there are numerous vendors to be found that will part with their wares at a cost. Beating bosses also results in them dropping some temporary upgrades. 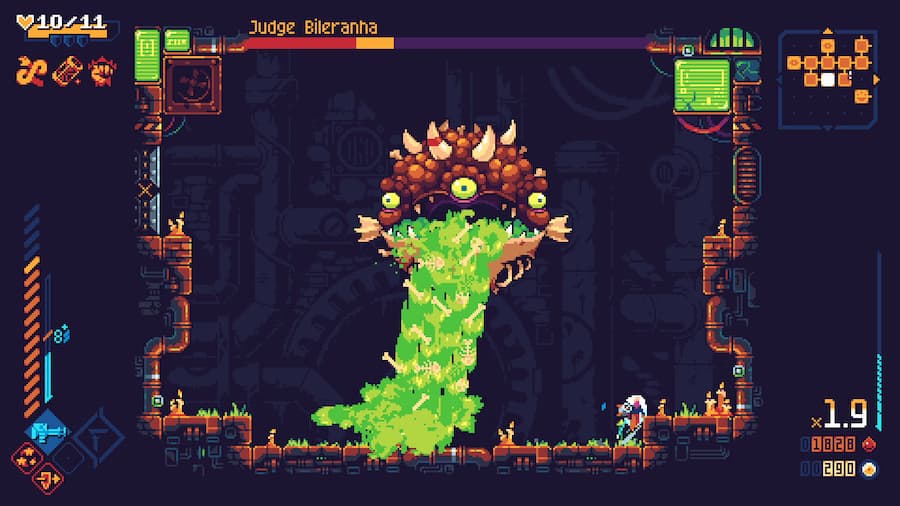 The truth is though, that while ScourgeBringer by default is hard as nails, anyone can complete it thanks to its accessibility options. Dive into its menus and you’ll find that you can slow down the speed of the game, as well as the speed of enemy bullets. There’s more, too, including the option to increase the number of health restoration items dropped by enemies, or even make yourself invulnerable. The latter does warn you that it disables some achievements, but it’s a small price to pay to eradicate any frustration that you may encounter.

There seems to have been a number of brilliant Rogue-likes released in the last few months, and ScourgeBringer is among the best of them. Its retro-styled visuals may not be to everyone’s tastes, but everything moves at such a quick pace that you hardly have time to fixate on them. Besides, I think they have character. The game’s soundtrack certainly does, moving between airy, atmospheric melodies when you’re exploring, to full-on metal that will make you want to bang your head as you obliterate any enemies that stand in your way. This is a must-play for fans of the genre.

ScourgeBringer is available on Xbox One, Switch and PC. We reviewed it on Xbox One X with a code provided by the game’s publisher. 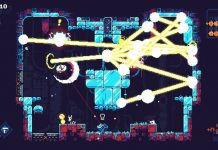 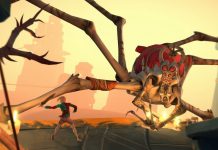