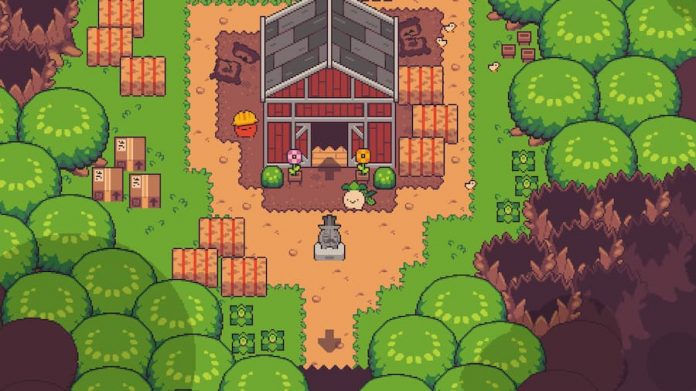 Especially if that someone is a turnip. Turns out that turnips are complete jerks. Well, specifically Turnip Boy from Turnip Boy Commits Tax Evasion. And tax evasion isn’t even Turnip Boy’s only crime. There’s many more he’ll commit before you’re done with the game’s demo, available to play for free on Steam.

Turnip Boy Commits Tax Evasion is a casual, 2D adventure game that puts players into the roots of a troublemaking rutabaga. Mayor Onion has caught him red-handed and has hired him to make up for his transgressions. In the demo, players must rid a nearby barn of some pesky pigs to help the mayor out. Along the way players will meet some quirky characters with their own side quests that they’d like help with. You’ll also find a few special items and weapons to help you take out enemies.

Turnip Boy may look pleased to be helping, but underneath he’s a bitter, angry root vegetable.

The controls for the game are super simple and easy to learn; all Turnip Boy can do is move, interact and attack. Finding a weapon and getting into the barn during the demo is pretty easy, but taking on King Pig is something else entirely. Once you’ve picked up (or more accurately, stolen) Mr. Lemon’s watering can, you can use it to water some bomb plants. You have to use these bomb plants to push bombs into King Pig to kill him and watch him satisfyingly break up into a bunch of pieces of bacon.

Though only short, Turnip Boy Commits Tax Evasion‘s demo gives players a glimpse at how exploration in the game will work as well as combat and puzzles. You’re also introduced to the adorable characters and become familiar with how brilliantly rude the game’s protagonist is.

Turnip Boy Commits Tax Evasion is set to release in 2021. If the full game continues to be as funny and enjoyable as the demo, it will definitely be one to keep an eye out for.